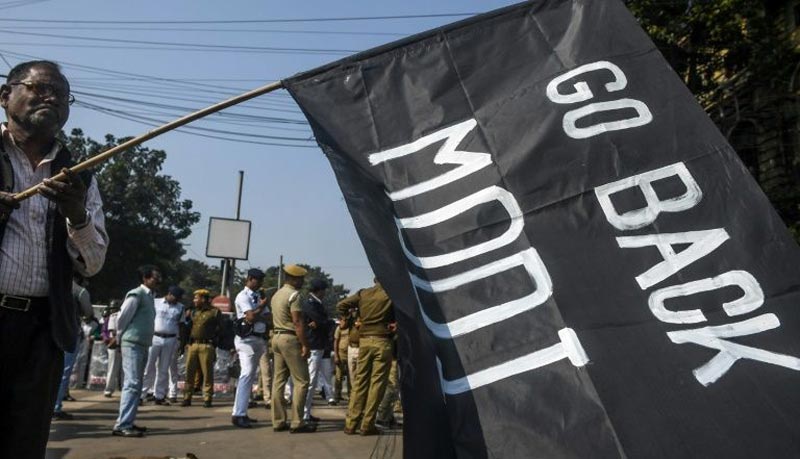 Tens of thousands staged protests through the night in the eastern city of Kolkata to denounce Modi’s weekend visit to the capital of West Bengal state, whose local rulers have strongly opposed the legislation.

Police said they were forced to act after protesters tried to storm past barricades to stop Modi’s vehicle outside a stadium, where the leader again defended the law and insisted the demonstrators were “misguided”.

Nearly 2,000 protesters gathered outside chanting “Fascist Modi, Go Back” before the showdown between demonstrators and police. More than 100 protesters were detained, a police official said. Protesters have burned effigies of the prime minister during his visit and brandished black flags, which is considered an insulting gesture in Indian society.

“The government can’t suppress our voice. We are not afraid. We are determined to fight for our rights,” Samit Nandi, one of the protesters, told AFP. “We will continue our protests until Modi leaves our city.”

West Bengal has become a political battlefield between Modi’s right-wing Bharatiya Janata Party (BJP) and regional powerhouse Mamata Banerjee, whose Trinamool Congress party leads the state. Banerjee is among state leaders nationwide who have said they will not implement the Citizenship Amendment Act, which excludes Muslims from a list of ethnic minorities from Pakistan, Afghanistan and Bangladesh who are allowed to seek Indian nationality.

Opponents say the government has created a religious test for citizenship in the secular country. Many among India’s 200 million Muslims fear the law is a precursor to a national register of citizens that could leave them stateless in the country of 1.3 billion. Many poor Indians do not have documents to prove their nationality. “CAA is not about taking away citizenship, it is about giving citizenship,” Modi told supporters.

He has accused political opponents of “misleading” and “inciting” people against his government. Widespread demonstrations have rocked the Hindu-majority nation since the law was approved by parliament last month. At least 27 people, mostly Muslims, have been killed with police accused of using disproportionate force in several states.