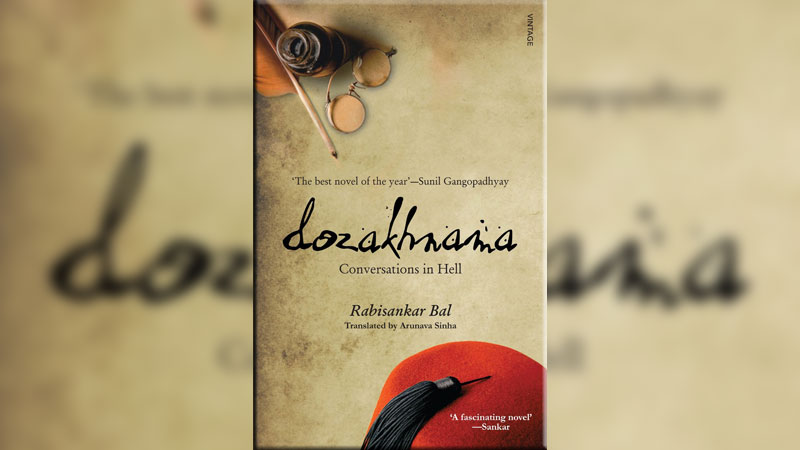 “There are two Ghalibs,’ you said once, ‘one of them is a Seljuq Turk, who consorts with Badshah’s, and the other is homeless and humiliated, weighed down by debt.” Rabisankar Bal.

It is a saying that to become a great poet one must have a broken heart and a pierced soul with pain. But Sadat Hassan Manto showed that to become a great writer one must have a broken heart too. The fascinating Novel Dozakhnama (Conversations in hell) is about two broken souls in different eras but connected by the same fate. It is the biography of Mirza Ghalib and Manto. The one is the poet of the Mughal era Mirza Ghalib Asadullah and the other is the defamed Urdu short story writer Sadat Hassan Manto. “Who tells the greatest story – God or Manto?” Rabisankar Bal.

The author has beautifully captived two saddened souls in one Novel. The major characters in the Novel are Mirza Ghalib and Manto.

The Novel “Dozakhnama” is written by Rabisankar Bal a Bengali Indian writer. He was born in 1962; and died in 2017, in Kolkata. He was best known for his two remarkable novels. Dozakhnama (conversations in hell), and Aynajiban (A Mirrored life). Those two of his novels were translated into English by an Indian translator Arunava Sinha.

Arunava Sinha was born in Kolkata. And currently lives in New Dehli. His thirty translations have been published. He translates Bengali fiction, and non-fiction into English. He has won a number of prizes for his translations. He is the winner of the Muse India translation award (2013) for Budhadeva (Bose’s when the time is right).

The author initiates the novel with an English and Hindi story writer, who is bestowed with an unpublished novel of Manto in Lucknow. He couldn’t write or read urdu. He quests to translate the unpublished novel. And reaches the doorsteps of an Urdu teacher Tabassum Mirza. Where he struggles to learn the Urdu language. And that’s how the captivating conversations start between Mirza Ghalib and Manto.

Dozakhnama is an engaging Novel. It is beautifully fabricated with Poetries, stories, and life lessons. It is full of amusement, pain, grief, and humor. I am still surprised how Rabisankar Bal has used his creativeness to construct an imaginary world, where he has put Mirza Ghalib on the one side of India and Manto on the other side of Pakistan. The conversations began from the graves of two literary legends. Where they tell their Dastans (Stories). In the Novel, Sometimes Manto wakes up from his grave and tells some of his stories and sometimes Mirza Ghalib does.

It is full of poetries of Mirza Ghalib and other renowned poets like Mir Taki Mir. Every chapter starts with the ode of Mirza Ghalib or Mir Taki mir and other poets. I found the poetry impressive. It has some of the best odes of Mir Taki Mir: As Mir sahib wrote in a sher: Everything’s indebted to the brightness of her beauty Whether it’s the flame at Kaba or the lamp at Somnath.

“Dozakhnama” also explains the History of the Sub-Continent. It confides the culture and history of India in the era of the Mughal empire. It further tells the brutality of the British raj. How they pour their mistreatments upon them. The fire of the conflict clutches everyone including the Mughal emperors and poets too. So, it’s where the miserable life of Mirza Ghalib Starts and how he struggles to reach his daily financial necessities. The Novel illustrates the hardships carried out in the lives of Mirza Ghalib and Sadat Hassan Manto. ‘I have wine, mian, it can make me forget everything; why do I need to pray?’

Moreover, Dozakhnama is also abundant with the tales of Manto and Mirza Ghalib. It comprises of 533 pages and many chapters. In every chapter, they tell incidents and pleasant experiences in their lives. Conversations shuffle from Manto to Ghalib in every chapter. In some conversations, they pass comments about each other and praise one another. Such as Mirza Ghalib tells about the life of Manto. Saadat Hasan could never confront Manto. Saadat Hasan was full of affectations-such elegance, the clothes must be just so, anything but Lahori shoes was out of the question, he had to possess at least a dozen pairs of sandals from the Karnal Boot Shop in Anarkali bazaar; there was no end to his fancies and demands. And Manto would grab him by his ear, shake him, and say, you fucking son of a bitch, you think you’re a fucking aristocrat, do you even know the fate of what you’re writing? They will blindfold you and gag you and throw you into a pit. All of Hindustan will reek with the stench of your stories. You bastard, you swine, you dare write Thanda Gosht? Is there no limit to your defiance of our religion? Have you heard what they say? All you write about are relationships of the flesh between men and women, is there anything besides red light areas in your stories?

“Dozakhnama” is the best novel I have read so far. If you are looking for an interesting conversation between two well- known personalities of literature then “Dozakhnama” would be a great choice to put on time. Look, mian, this is Dakuki. – Who else do you have in your bag, mian? – See for yourself, do you recognize who this is? – Mirza sahib, huzoor. – And this? – Jahanpanah Bahadur Shah. – This? Kallu leaped up. ‘Manto Bhai … you … you … you have become a puppet too?’ Pulling out wooden puppets one after another from his bag, the dastango arranged them around the precincts of the mosque. In astonishment, I discovered that they were all characters from my novel Dozakhnama. The painted puppets glittered in the light. They had not been soiled by the heat and dust of history. Allow Manto to bid you farewell now, my reader, my companion. Khuda hafiz.