Chaiwali – the woman who changed her fate by breaking taboo 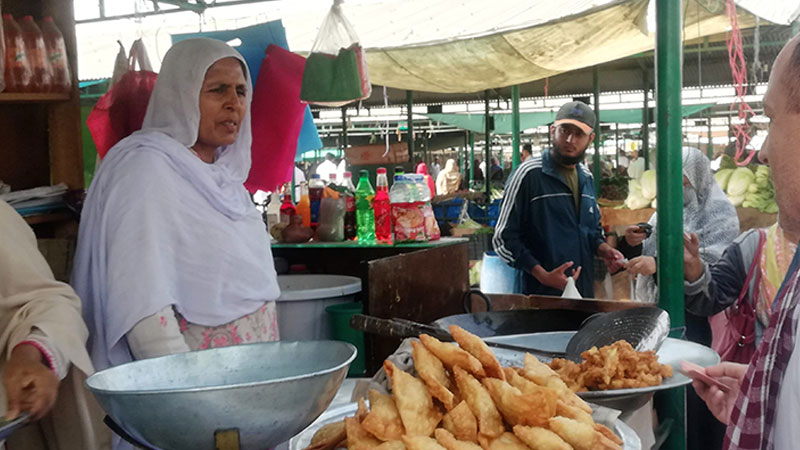 When Shehnaz Bibi lost her husband, she was struggling to feed her children and family. She didn’t have to anything to feed her kids at home. “I didn’t want to put my children burden on someone else, so I decided to do work and adopt an occupation which is dominateed by men.

Shahnaz started a tea stall in the federal capital’s Sunday Market (Itwar Bazaar) at Peshawar Morr and her life has taken a turn for the better.

At the beginning, it was difficult for her to it. But with the passage of time, she learned the skills of management and dealing with the customers and market administration and colleagues, she explained.

Answering to a question, Shehnaz said that shopkeepers and customers behaviour has changed and even now they are encouraging her for her work.

Shagufta Bibi (not her real name) – daughter of Shehnaz Bibi – also support her in their tea stall. “My mother is ideal and role model for me. She worked day and night for us to and fulfilled every wishes and requirements we are until now,” said proud daughter.

Shagufta who also lost her husband is also working with her mother to provide better life for her kids and siblings.

“We have five brothers and sisters and I’m elder among them. My husband also passed away few years ago, and now I work with my mother at the tea stall to educate my son” Shagufta said.

Pakistan has held the second-to-last spot on the Global Gender Gap Index for five years in a row (2012-17). Though women constitute 49% of Pakistan’s population, they constitute only 24% of the labour force. The International Labour Organization’s (ILO) data indicates that Labour Force Participation Rate (LFPR) for men (82.5%) is more than three times higher than women (24.8%).

The gender gap in LFPR is one of the world’s highest, making Pakistan comparable with Arab states and countries of North Africa. Even when women want to participate in the labour force, they are unable to find employment. There is a noticeable gender gap in the unemployment rate.

Shehnaz Bibi is also former Lady councilor from Union Council Dhok Hassu of Rawalpindi. She was elected as lady councilor on PMLN-N ticket in 2015.

According to Shehnaz, her purpose of joining politics was to facilitate and help the deserving people of her area but she is disappointed with the political system and said, the locals of her union council supported her to resolve their problem after winning election, but after being elected as lady councilor the Chairman of her union council did facilitated her in resolving the problems of her union council. “In our political system no one listen to lady, even if she is elected member. I meet government officials, party leadership and elected bodies regarding the problems of her UC females but no one has taken their problems seriously”, she maintained.

To a question regarding plan to contest election next time, she said she has no plan to contest election again in future. Voters and people of your constituency demands works and addresses their problems while the government officials, bureaucrats, and party leadership do not listen people problems after getting the rule and finally the local leader like her feels shame while facing her people. Shehnaz Bibi’s son Shoaib Ahmed is also running a grocery shop in Sunday Market (Itwar Bazar). He said, he was only two-year-old when his father left him, he does not remember his father.

“My mother never let us felt like an orphan. What we are today is only because of our mother”, Shoaib maintained.