Sad, indeed, very sad. Once again, Houbara Bustards were used in soft diplomacy by the Pakistani Foreign Office. The Royal King of Bahrain, with his uncles and cousins, has been granted a permit to hunt Houbara Bustard, a precious bird declared endangered by the International Union for the Conservation of Nature (IUCN). 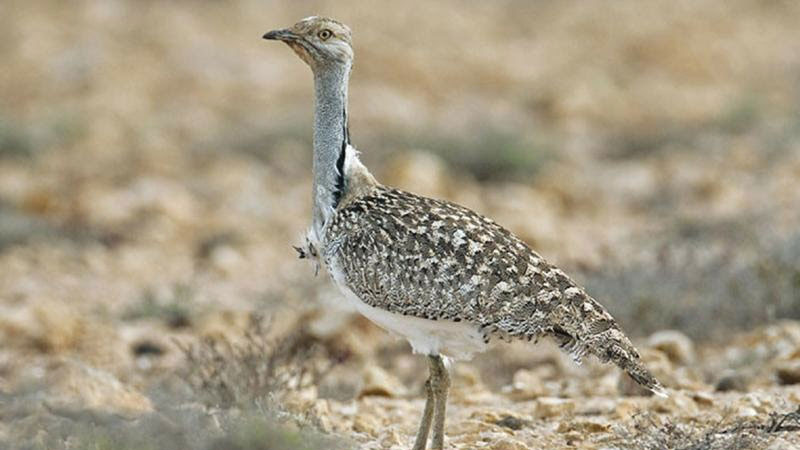 While one ranks hunting as a game, but in fact, it is a brutal act that ultimately ends at the extinction of precious fauna. Humans will have to pay the price. Birds are nothing but beauty. 85 per cent of their species are habituated in tropical Africa and the remaining 15 per cent in the rest of the world. Some species of birds migrate miles to avoid severe winter and are posed to risk as they are hunted. In return, they cannot fly back to their native destination. With the onset of the winter season, the royals reach Pakistan intending to hunt houbara, a luxury that never ends and would cause the extinction of species. Wealthy Arabs pay a huge sum for the season and violate even whatever their license does not list those ill acts.

During the winter season, quite a big number of aquatic bird species migrate to the diversified locations, particularly water bodies (lakes) of Pakistan, most of them in Sindh. Houbara bustard, on the other hand, is a terrestrial migratory bird. It finds refuge in plain lands of Sindh, Southern Punjab and Balochistan.

According to estimates, around 30,000 to 40,000 houbara bustards migrate to Pakistan every year and due to overhunting, these innocent migrants never travel back to the destination they came from. Arabs and some local lords may be truly blamed for this dis-credit, however, to them, it is a status symbol.

Once a thriving species, the houbara bustard population has drastically fallen in recent years and the IUCN has placed it on its “red list” of threatened species. Its current global population is estimated at between 50,000 to 100,000 birds and the alarming speed with which they are hunted, they are likely to become extinct.

They’re a shy, rare breed; the size of a chicken. Hunting them is officially banned in Pakistan. But the ban does not hold when Arab royals begin their Houbara bustard hunting trips. Money can buy them almost everything. Arab princes and their wealthy friends, with the help of Pakistan Wildlife, mange to hunt Houbara bustards both as a sport and because the meat is considered a luxury

These birds, though not native to Pakistan migrate miles central Asia to Pakistan during the winter season and provide the Pakistani elite with a chance to engage in “soft diplomacy” with royal princes, and in a way, Pakistan is a secretive Houbara bustard hunting industry that serves multiple purposes.

Hunting Houbara has become a popular game and despite legal restrictions, illegal hunters, particularly coming from Gulf states, hunt it with their trained birds of prey. For locals, the winter season is a source of earning and a chance to establish contacts.

It is reported that, despite the hunting ban, the government issues between 25 and 35 special permits annually to wealthy sheikhs, allowing them to hunt the bird. The hunting parties are given a limit of 100 birds in a maximum 10-day period but often exceed their quota. One would never forget the leaking of an official report in 2014, that a Saudi prince had killed more than 2,000 birds in a 21-day hunting safari.

Our officials, time and again, impose a “temporary moratorium” every winter but there is a clear violation. Which is why in August 2015, the Supreme Court ordered a blanket ban on hunting Houbara bustards, officials issued “partridge hunting” licenses to Arab royals instead.

The hunting of houbara bustard is officially banned but it used as foreign policy tool and government allows influential nationals of the Arabian Gulf states to hunt the bird for a price tag of US$100,000

The dirty role of game warden must not be ignored. They are deaf to what you tell them and act so dormant as if nothing had gone. Once, news along with pictorial proof goes viral, they too come on the surface; making dummy management for eyewash.

The native people speak volumes of problems created by wealthy Arabs. In the name of security, farmers are kept at bay for weeks and the district management has its fangs to use and keep the masses shut till the business is over.

It is important to note that the reproductive potential of Houbaras is not impressive. The female Houbara normally has two clutches a year, although in some cases, it is three. A single clutch can contain between two and four eggs. The number of eggs also depends on the habitat as well as the weather conditions. The female Houbara makes a shallow hole or scrapes in the sandy ground to lay her eggs. When sitting on her eggs, her camouflage makes her almost invisible to her surroundings.

Surprisingly, there has been habitat destruction. Therefore, the bird does not find a suitable atmosphere to breed and continue their generation. Hence, habitat destruction has also a contribution to make this creature as endangered species.

The global population of Houbara Bustards, as estimated by IUCN, during 2015 was between 78,960 and 97,000, and the principal threat is from hunting. If hunting pressure is not reduced, the species could soon become extinct. Pakistan must not act like “hunter’s paradise” and endangered species must be given the due legitimate shelter to save the precious wildlife.