Lawmakers erupt into protest over convening of NA session ‘in haste’ 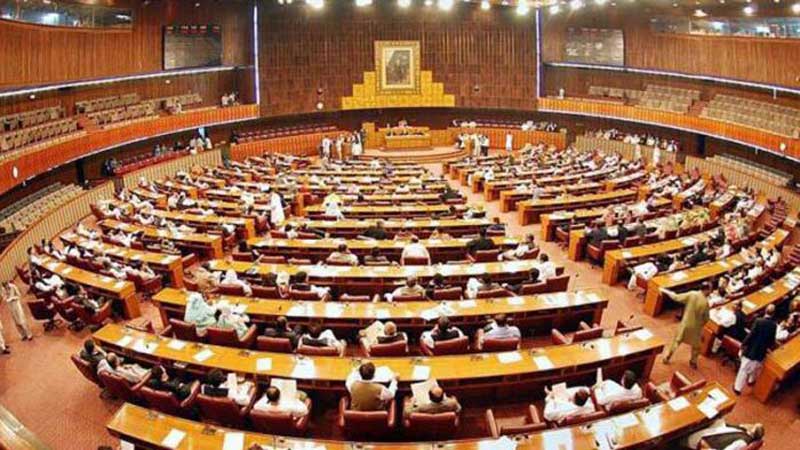 Lawmakers in the Lower House of Parliament on Wednesday erupted into a protest over the convening of the session ‘in haste’.

“Many members have been unable to reach Islamabad from their constituencies,” PPP MNA Syed Naveed Qamar said, as he questioned the logic behind the decision.

Former speaker Ayaz Sadiq asked the deputy speaker to defer all the questions asked by the members who are not present in the House.

Former prime minister Raja Pervez Ashraf also protested the convening of the session at such a short notice. “The members are sitting at Karachi and Multan airports. People are unable to come from Balochistan. The session has been convened on a less-than-24-hour notice,” he said. “The members are asking you to defer the questions whereas no written replies have been given to most of the questions. This is a joke,” he declared.

Ashraf went on to criticise what he termed ‘the height of irresponsibility’ on the part of the government. “The government has increased petroleum prices. We register our protest. This House is not truly representing the people. We want a debate on the price-hike,” he demanded.

PML-N parliamentary leader in NA Khawaja Asif said that Prime Minister Imran Khan had promised that he would himself come to the house to give replies to the questions. “The PM has not come to the assembly for the last whole quarter starting from October,” he pointed out, adding, “The session was scheduled to start from January 10, but the government has suddenly summoned the sitting.” He called on the government ‘to maintain sanctity of the rules’.

Communications Minister Murad Saeed said the government has already introduced an amendment to the rules to allow ‘PM Question Hour’. “The issue is still being debated,” he said.

Saeed assured the members of the Lower House that the ‘difficult time’ has passed and that the new year will bring prosperity. “The government is launching Ehsas programme on January 8,” he said, calling on all members to participate in the programme.

PPP MNA Shazia Marri said the ‘out of mind’ government wants to run parliament in a haphazard way, ‘just as it is running the country’. According to Marri, the members were informed at 5pm on Tuesday through media about the parliament sessions to be held the very next day.

Meanwhile, the opposition MNAs termed excessive gas load shedding in the country a failure of the PTI government. Not only the opposition but Deputy Speaker Qasim Suri also asked Federal Minister for Energy Omar Ayub Khan to ensure availability of gas in Quetta.

Responding to a calling attention notice regarding unprecedented load shedding of natural gas, Omar Ayub Khan blamed the previous governments of PML-N and PPP for the issue. He claimed that both the previous government could not focus on the production and exploration of gas. “Since formation of the incumbent government, about eight blocks have been awarded for exploration,” he said, and assured the House that about 18 more blocks will be given for production and exploration of gas. The minister also held the Sindh government responsible for gas load shedding, which according to him could not allow SSGCL to lay a gas pipeline which would have at least helped in ensuring gas facility to the province.

In another calling-attention notice, the National Assembly was informed that the government has enhanced budget for merged districts comprising erstwhile FATA from Rs 58 billion to Rs 162 billion.

Minister of State for SAFRON Shehryar Afridi said Rs 62 billion have been allocated to the Khyber Pakhtunkhwa government in lieu of ‘Recurrent and Development Budget’. He said the federal government has approved Rs 1.1 billion under Prime Minister’s National Health Program for poor families in erstwhile FATA. He said Khyber Pakhtunkhwa government has also earmarked Rs 11 billion for the merged districts, adding that a five-year income tax and sales tax exemption has been granted to the tribal areas.