“Thus, if I could not accept Christianity either as a perfect, or the greatest religion, neither was I then convinced of Hinduism being such. Hindu defects were pressingly visible to me. If untouchability could be a part of Hinduism, it could but be a rotten part or an excrescence. I could not understand the raison d’tre of a multitude of sects and castes. What was the meaning of saying the Vedas were the inspired Word of God? If they were inspired, why not also the Bible and Koran?” (Gandhi: An Autobiography, 137). 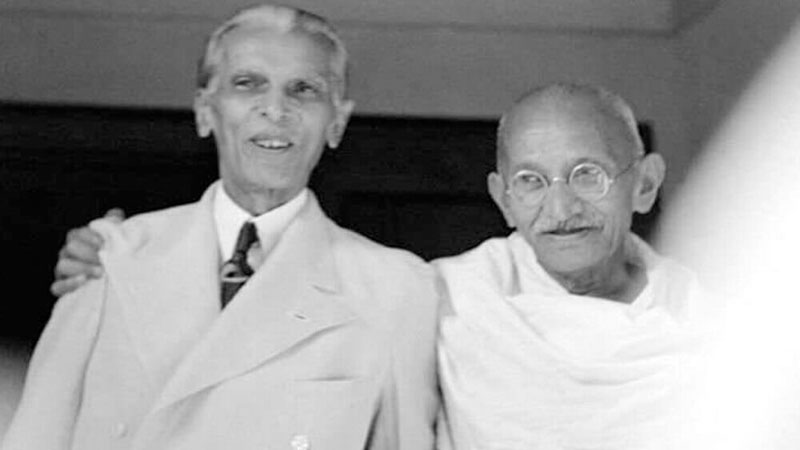 Historically, the notion of “Akhand Bharat” refers to a distinctive model of the hegemony of political forces, but not religious forces for democratic India. Moreover, it observed the preservation of the rights of minorities, tiny communities and support for the certain political process. In pre-partition India, the INC used the slogan of “Akhand Bharat” for the salvation of “India” and “Indians.” But history proves it was to subjugate the “Muslims,” the political activities of AIML and the demand of the partition of India.

Gandhi practised his political struggle under the strong will of firm ideologies. As “Swaraj,” the self-rule could be the primary part of a truly secular and democratic society. Swaraj is based on the existence of unity in traditional India because without the national integration, the largest “democracy,” India, cannot claim to be a secular state. The true political deeds and socio-religious needs entirely depend on the actual supremacy of “self-rule” because it determines the public will. But unfortunately, contemporary India is allegedly claiming a secular or democratic state. It is emerging as a fundamental state supporting “Hindutva.”

Moreover, Gandhi’s “Satyagraha,” purely reflects his intention of the reformation and purification of soul and spirit. Satyagraha refers to the recognition of good and the rejection of evil in the human soul. Gandhi used it as a tool, not to humiliate others, but to consider the inaccuracies of his adversaries for betterment and self-accountability. He believed in “all good and positive” in a soul. This demonstrates his positive gesture towards the formation of a nonviolent society with co-existence. He was a great apostle of “Ahimsa” to avoid impairment. He believed non-violence should be ingrained, not by actions, but with words and behaviours. Even, the failure of his ideology “Ahimsa” resulted in his murder committed by the RSS on January 30, 1948, in Delhi.

Practically, the robust concept of “Ahimsa” also effectively prevailed in India after partition, and because of effective ideologies of Gandhi, India was labelled the “secular state.”

“In his lifetime, Mahatma (a great soul) Gandhi was venerated as a moral teacher, a reformer who sought an India, as free from caste as from materialism…in Asia particularly he has been regarded as a great influence for peace whose teaching had a message not only for India…but for the world.” (Chambers Biographical Dictionary).

In 1919, M K Gandhi emerged as “Mahatma” because of his incipient influence in the INC. Steadily, he also raised voice to reform the Hindu caste system. No doubt, he was in favour of the caste system and considered it useful, but its rigid practises were against the norms of modern democracy. Moreover, he also wished to abolish the untouchability and Hindu-Muslim unity through the practice of Satyagraha. In short, he strived for the practice of “the culture of the heart or the building of character,” particularly in the students or the youth of the nation.

But, steadily, a certain Hindu fundamental class emerged and became influential, which gave a sense of uncertainty to minorities, particularly Muslims, while they are the largest minority of India.

The current Modi regime is the dense combination of the BJP, the RSS and the excessive admirer of Hindutva doctrine; devised by V D Savarkar in 1923. This antagonistic doctrine based on the way of life established on the spiritual and cultural codes developed in India. Its central idea is the promotion of Hinduism. Modi’s policies are tending the purification in India by annoying the Muslim majority by questioning their loyalty and affiliation. Historically, “Indian Citizenship Act 2019” is its worst example. Modi seemingly following the policy of President Donald Trump, who banned the entry of the people of various Muslim countries in the US for security reasons.

India claimed herself a secular country, not a Hindu country, so the Hindutva ideology is entirely against the existence of India. “The Citizenship (Amendment) Bill, 2019,” is not a citizenship bill but a detention bill, particularly for Indian Muslims. This bill is providing the refuge to the “Hindu, Sikh, Buddhist, Jain, Parsi or Christian community from Afghanistan, Bangladesh or Pakistan,” but not Muslims. In the current international scenario, positive relations with neighbouring countries is the need of time. But these actions prove India’s counter legislation against Muslim states round it. Such actions will eventually provoke the sentiments of two hundred million Muslims in India; leading to the sympathies of the Muslim population, shifting towards neighbouring Muslim countries, which can be harmful to the Indian nationalism.

Both Muslims and Hindus are protesting against the said Act. Now, students are an essential part of protests. According to the reports, students of around 60 colleges and universities are found in the struggle. The protest has spread across India. Dozens of protestors have died or injured while hundreds are detained in prisons or detention centres. The Assam state is a dominant point of the demonstration where around two million people are on the road. Both Hindus and Muslims are in protest in Assam. It shares a border with Bangladesh, where the issue is ethnical, not religious. Natives don’t want the migration of the Bengali Hindus into Assam from Bangladesh because it can disturb the demography.

These historical protests pretend that the Indian masses belong to all communities are on one page and oppose the undemocratic agenda of BJP’s Modi. The Muslim minority has to prove their affiliation with India for nationality and other minorities are scared that it may be their turn next. Indians are now looking at the democratic people rather than the rigid BJP regime. This is the denial of the notion of Hindutva by Indians, which is the pivotal point of the whole movement. Moreover, a large population is living below the poverty line or lead a nomadic life or are slums dwellers and don’t have enough sources, approaches and documentation to prove themselves as Indian.

The protest reflects that minorities don’t feel safe. In such a scenario, how can the Indian government claim to provide refuge and security to the minorities of the neighbouring countries? Hindus are already in majority, Sikhs already have a Khalistan Movement in Punjab while Buddhists, Jains, Parsis and Christians are tiny communities. So, the Bill postulates that its objective is only to discriminate against the Muslim community, the largest minority of India, and is practised in every regime of the BJP. The Babri mosque issue, Kashmir’s legislation and this citizenship act are the most awful examples.

BJP leader, Himanta Biswa Sarma, in a TV show, tried to connect the Bill historically with the ideologies of Gandhi and Nehru about the Partition of India, which is historically wrong. However, he must remember that India has ever been dividing on religious dogmas; the 1905 partition of Bengal, the Kashmir issue and the partition of Punjab in 1947 were results of religious scrimmages, particularly between Muslims and non-Muslims.

The UN labelled this act “fundamentally discriminatory in nature.”

Indian High Judiciary has also condemned it, but Hidutva’s followers, in spite of nationwide protests, are still persuading their aim of establishing “India as a Hindu State.” This Act is also contrary to Articles 14, 19 and 21 of the Indian Constitution. These articles provide the right of equality before the law, right of freedom, right to peacefully assemble and move freely “to reside and settle in any part of the territory of India” as well as personal liberty and protection in India. Furthermore, this Act also conflicts with Articles 1 and 2 of the UN Human Rights Declaration of 1948.

The students’ interest in the protest is alarming for the Indian government because history testifies that whatever movement the students have been a part of, must prosper. Pakistan Movement is its splendid example. The BJP regime should revisit the bill and try to engage the demonstrators for the peace and prosperity of the nation. India should be for every Indian, not only for the majority.

Gandhi’s ideologies should not only be the part of literature but should be practised in India because he is the founding father of the world’s largest democracy and a historically secular state. M K Gandhi was the follower of the non-violence, but the BJP regime is promoting violence by prompting the minorities through its policies, legislation, statements and actions. Modi as a powerful “prince” is stimulating the violence while Gandhi urged that “an armed man naturally relies upon his arms,” but “a man who is intentionally unarmed relies upon the unseen force called God.” Gandhi’s gesture is enough for the BJP to understand the contemporary situation because non-violent India is more beneficial for peaceful South Asia.