The 30-year-old didn’t hide herself in a corner after the failure of her first marriage rather revealed the reasons behind her divorce. Annie tied knot with Noureed Awan in 2012 and just after a few weeks of her marriage, she got divorced. She claimed that the former Model and Actress Sataesh Khan was responsible for her divorce.

Two years after her divorce, she got married with Saad Ahmed Khan on December 26, 2014. She is happy with him and also blessed with a beautiful daughter but the society doesn’t seem to be happy. Her recent Instagram post tells the whole story. She had been bullied for being married again and she reveals it there.

“So I’m writing this post with tears in my eyes because I am sick and tired of the abuse I get on social media for my second marriage,” the rock-star wrote in her post.

She raised a very crucial question: “YES I married AGAIN! Why do people write ” how many times you gonna get married” “kitni dafa shadi karo gi” “maneater” “vulgar woman” “wahiyaat aurat” What sin have I committed?”

“Our religion permits us to marry again after being divorced, our beautiful Hazrat Khadijah was married 3 times, her third marriage was to Prophet Muhammad PBUH.” She said.

“What bullshit Pakistani culture we have where divorcee women are scandalised and stigmatised in our society. They become “black sheep” or “damaged goods”.” She threw light on a very dark side of this society.

Not only men but women were also among those who bullied the rock star, as stated by her. Here is the complete note: 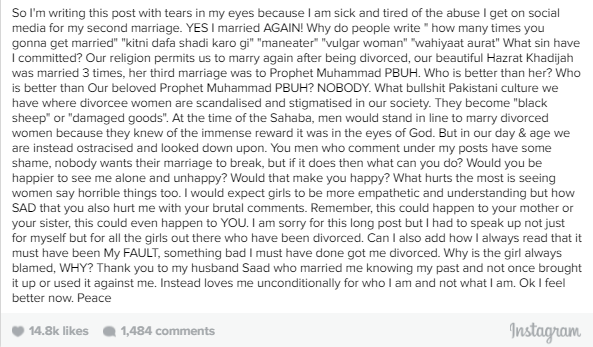 She has described in detail in her post that she wants peace in her life and no more haters. If her husband has no issue with her past then who are we to question her character? Even when Islam allows her second marriage?