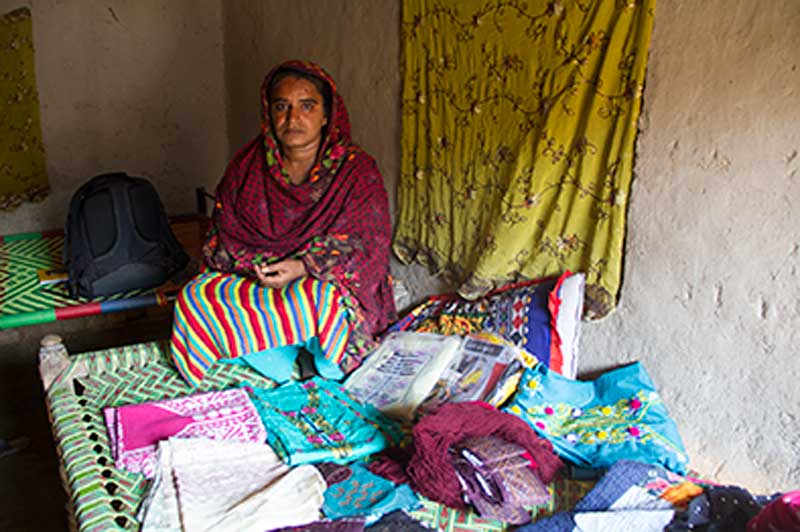 A single unpaved road connects the village of Jan Muhammad Laghari to the nearest town of Miro Khan in District Qambar Shahdadkot, Sindh. The area is fertile. Maize fields stretch for miles on either side of the road and fish ponds dotting the landscape shimmer under the harsh sun. But life is hard for those who live of these lands. There are no hospitals and few functioning schools, and most people are landless peasants who lack the means to travel to Miro Khan to access the few government services available there.

Growing up in this remote village, Sameera was among the lucky few who were able to complete primary schooling. A local landlord had offered a few rooms to Raza Mohammad Jamali, a government appointed school teacher who held classes here. Each day girls and boys of various ages sat together practicing basic arithmetic and learnt to read and write in Sindhi and Urdu.

Master Jamali, Sameera recalls, was a dedicated teacher who travelled to the village each day, ensuring that all the students in his class completed primary schooling. But the arrangement only lasted for a few years. Jamali was appointed to another school and the teachers sent to take his place often did not show up.

Sixteen years later, Sameera now a mother of five, worried for her children’s future. Without a functional school, a whole generation of children in the village were being denied an education. “When children don’t go to school, they play in the streets all day and pick up bad habits. They fight with each other and involve their mothers. The entire community suffers,” she says.

Sameera says some people could afford to send their children to schools in Miro Khan but most could not pay for transportation. And even for those who had the means, sending girls outside the village to study was unimaginable. Three years ago, the women in Jan Muhammad Laghari formed community organisations as part of the European Union (EU) funded SUCCESS project implemented by Sindh Rural Support Organisation (SRSO) a member of the Rural Support Programmes Network (RSPN).

The EU funded SUCCESS project is based on the RSP’s model for participatory development built on the idea that even the poorest and most marginalised people have the ability to pull themselves out of poverty if they organise themselves into their own institutions. Once they are organised they can better manage their own limited resources and demand access to government resources and services.

As the women in Sameera’s village came together to form community, village and local level organisations, they identified the lack of a functioning school as their biggest issue. Sameera as the leader of the Local Support Organisation (LSO) in her area decided to call the assistant commissioner (AC). “I told him that the government appointed teachers do not show up and the abandoned school building is collapsing,” Sameera narrates. The assistant commissioner promised to visit the village.

The following week, the assistant commissioner arrived in the village with an entourage of government officials. Sameera was overjoyed. This was the first time in years that a government official had visited their village. “I could not believe that he had come because of my phone call. I felt so important,” she beams as she recalls.

The assistant commissioner ordered the local education department to appoint a teacher to the village school. Sameera requested the department to ask her old teacher Master Jamali if he would like to return to the village. So sixteen years after he had left his position at Goth Jan Mohammad Leghari the old teacher returned to teach his students’ children. It was a proud moment for both Sameera and Master Jamali who was now nearly sixty years old. Sameera chuckles, “The Master would joke that I had dragged him back to this godforsaken village.”

Master Jamali began classes at the once abandoned school building which quickly filled up with students. Today, 135 students are enrolled at the school, 72 of whom are girls. Eventually, the old Master retired earlier this year and another teacher took his place but with the members of the community organisation overseeing the functioning of the school, classes take place regularly.

Early last year, the members with support from the teacher wrote a letter to the education department asking for a new school building. The request was approved and construction began. Classes are now taking place in the newly constructed building which includes separate classrooms for boys and girls. Sameera says she feels indescribable joy when she sees groups of children walking towards the school each morning. “I am proud of what the women in my community have been able to achieve. Even the men respect us more and ask us to help them get things done,” she says with a smile.

A few kilometers away, in Union Council Silra, a suburban part of Shahdadkot, Parveen and other members of her community organisation managed to convince their local government to provide them with handpumps.

Parveen recalls spending her entire day worrying about water. Her husband worked as a wage labourer and like many others in the nieghbourhood, they could not afford to install a handpump in their house. On days when they had some cash, they would buy a few liters of water from a man who would bring water to the nieghbourhood on a donkey cart. On other days, Parveen and her children would stand in line to fill containers from a tap at a local mosque. “Water is everything. When you don’t have water, you can’t cook food, wash your clothes or go to the bathroom,” she says.

When the women in Silra formed a community organisation, they identified the lack of water supply as their biggest issue. They decided to visit the Chairman of the Union Council and ask for his support. “I was so nervous. I had never been to a government office before. The chairman is an important man and I worried that he would not pay attention to a group of poor women,” Parveen recalls.

But to her surprise, UC Chairman Abdul Jabbar Noor Ahmed was respectful and welcoming. “He even offered us soft drinks,” she quips. When Parveen told the chairman about the water shortages in the area to which the Chairman agreed and hand pumps were installed in the village.

With running water available, Parveen was able to get a bathroom constructed in her home. “Now I know how things get done and I plan on getting solar panels installed in our nieghbourhood,” she says.

Achieving things as a community has instilled a new sense of hope among the women in Silra. Since forming community organisations in 2017, they have been able to get dozens of women registered with NADRA, organise vaccination drives and pool resources to start small businesses. “We were just housewives once, thinking about ourselves and our families but now we think like a community,” she says.