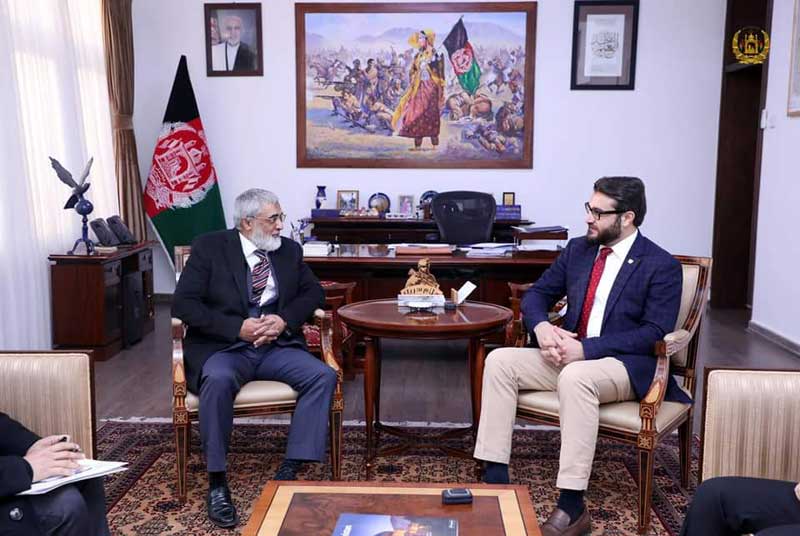 Pakistan closed its consular office in Kabul last month, citing “security reasons” after the Foreign Office said its embassy staff members had been “obstructed on the road and the embassy vehicles were also hit by motorcycles while going towards the embassy.”

On its Afghan Foreign Ministry had claimed that the ISI had “summoned” Ambassador Atif Mashal and “mistreated” him, the charges denied by Pakistan.

Afghan officials in Kabul said the Pakistani ambassador met Mohib on Monday and both sides emphasized to expand relations.

Mohib said Afghanistan is ready to cooperate with Pakistan in all fields and expect the same from neighbours, according to Mohib’s office. The Afghan NSA said the two countries should not work for today but also for the future as neighbours cannot be separated from each other, said a statement issued by Kabir Haqmal, spokesman for the NSA. The Afghan adviser said people in both countries need good relations. Pakistani ambassador assured that he will work for the improvement in relations and understanding. The Pakistani embassy officials evaded comments when approached for their response about the meeting. Pakistan had stopped visa operations in Kabul on Nov.3 and still closed. However, the embassy processes visa applications for medical emergencies/patients during the closure of consular services.

Afghanistan said on Friday it has shut down its consulate in Peshawar over the removal of the Afghan flag from a market in the city. In September the Afghan government closed its consulate in Peshawar after the police removed the Afghan national flag from a marketplace. The controversy started after the Supreme Court of Pakistan ruled that a Pakistani citizen Shaukat Kashmiri is the owner of the Afghan Market, instructing the authorities to vacate the building and hand it over to Kashmiri.

On its part, the Afghan embassy in Islamabad insists that Afghanistan owns the area and it was purchased before the birth of Pakistan. The plot belonged to Afghan national bank, according the embassy. The closure of the Afghan consulate and Pakistan’s consular section in Kabul created lots of problems for the people in both countries. Thousands of Afghans are forced to go to Jalalabad and other major cities to get Pakistani visas. Similarly visa applicants in Peshawar are coming to Islamabad to get visas.

Afghan students, seeking admissions in Pakistan on self-finance basis, suffer the most as they face lots of problems to get Pakistani visas. Several students have told Daily Times they have got admissions in Pakistani educational institutions but cannot get students visas in Kabul. They say Pakistani consulates in Afghanistan do not issue students visa. Sources say meetings of all groups under the Afghanistan, Pakistan Action Plan for Peace and Solidarity (APAPPS) framework, which were scheduled to be held in Kabul in December, has been postponed and is likely to be held in January. The last APAPPS meeting was held in Islamabad in June.