The Art of Hal Bevan-Petman

The Mohatta Palace Museum lights up for the forgotten artist, Hal Bevan-Petman. The rare collection of artworks was generously lent for the exhibit by several senior families who had had the opportunity of their grandparents, parents, siblings and other family members to have sat for a portrait by the British artist who had adopted Pakistan as his home. The exhibition was curated by Nasreen Askari, co-founder and director of the Mohatta Palace Museum. It was co-curated by Romano Karim Yusuf, an avid classic cars enthusiast and art researcher. 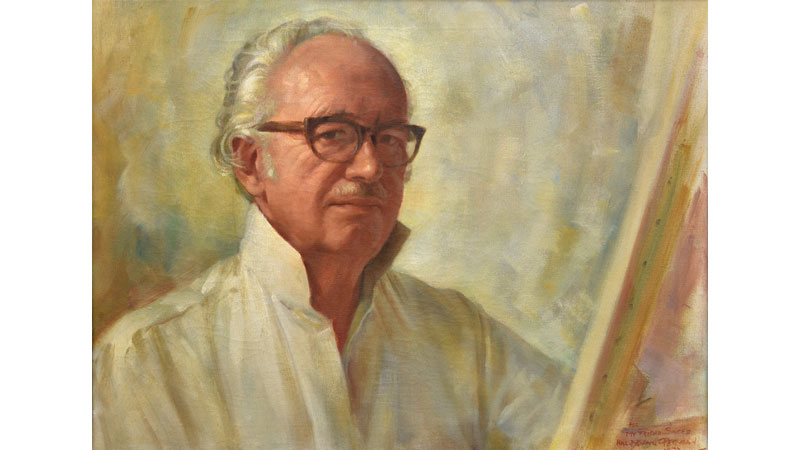 Henry Charles ‘Hal’ Bevan-Petman was born in England on October 28, 1894. His parents, Bertram Amor Bevan-Petman (1870-1931) and Maria Minnie Bevan Petman (1869-1942), moved to the subcontinent and had several businesses there. Amongst some of which were mines in the Balochistan region. Research shows he was the third generation of his family who had resided in India, which was then under British rule. With an inheritance left in the newly formed state of Pakistan in 1947, both Petman and his brother stayed back in the country they had grown to love and what they called home.

He is known to have one daughter, Minnie Frances Duncan, by his first wife Frances Slough (an artist’s model). Sadly, the marriage ended up in a divorce only a few years later. Based on her correspondence with Romano, Hal’s grand-daughter, Susan Rowe, is currently writing a book on her grandfather.

Hal and his third wife, Berylle Dyer, whom he met, and married in Lahore some years before partition, settled down to a life residing in Rawalpindi Club, with the hot summers spent in Murree and Bhurban. She was very supportive of his work. Two of them became a part of the fabric of Pakistani society. Much of his family’s history and circumstances were buried as neither libraries nor art colleges in Pakistan held any information about him in print. Research in Pakistan has been compiled by Romano. Later, a supportive friend financed his documentary.

Petman had graduated with a fine arts degree from the Slade School of Art in 1917. A roaring 1920s saw the young artists’ work being featured in The Illustrated London News, The Sketch and The Bystander. The drawings at the time would have been considered quite risqué in a prudish post-Edwardian era and can now be found as prints online. The painted “models” came to be referred popularly as ‘The Petman Girls.” Reflective of his trademark are elongated necks with the depth given in particular to the eyes with a certain “doe-eyed” look in all his models, which were soon to become his signature style, widely recognised and attributed. Subsequently, his landscapes and portraits got noticed and the subject matter turned into distinguished notable personalities and socialites.

Pakistan saw the 50s, 60s and 70s when Petman’s popularity was on a consistent high as his clientele ranged from the elite class who now vied for that family portrait to be done by him. This included in the list, the Nawab of Bahawalpur, who corresponded with Hal regularly and the bill and quotation of which have been documented as the discussion pertained to the charges of the interiors of the Nawab’s Palace.

During his time spent in Pakistan, he painted several notable personalities and/or their spouses, ranging from Mohammad Ali Jinnah, the founder of Pakistan, various subsequent presidents to military commanders. He was commissioned to paint military battle scenes, which now adorn the walls of numerous Pakistani Military Academic Institutions.

As his work in later years was shunned by the local art scene, Petman, as an artist could not get the foothold of being accepted with the younger art crowd. One doesn’t know why this was so, whether it was because he had a niche segment of artistry, which was being lost with the flood of modernism, whether it was the fact that eventually, portraiture in Pakistan stopped being considered a respectable art form or perhaps it was the fact he was British and a reminder of colonial rule; one simply does not know. He was labelled, demeaned and recorded as a “commissioned artist.” However, one begs to differ on that note. Being commissioned or not, it would not have made him any less of an artist. His paintings had reached British royalty where four of his works are displayed in Sandringham House as they were gifted to Queen Elizabeth II by the Government of Pakistan in 1961. These paintings form a part of the Royal Art Collection. 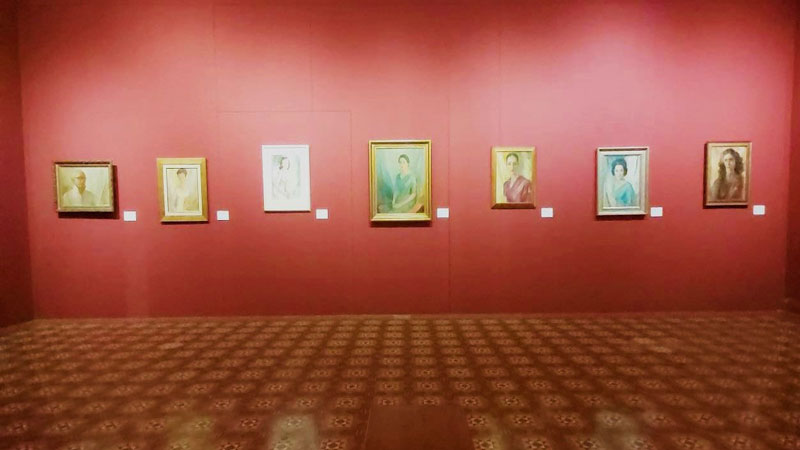 As one walked through the exhibit, the beautiful tiles of the Mohatta Palace rooms gleamed and the well-kept grounds received the guests with a grand welcome. Lights shone bright and the Mohatta Palace which was once the home of Fatima Jinnah, the sister of Mohammad Ali Jinnah, was indeed a beautiful venue to behold.

A seven-year-old Romano remembers a seated gentleman painting away on the grounds of the Rawalpindi Club. “Uncle Hal” as he was fondly called, became a family friend of several of the families he painted. He was conversant in ‘Urdu’ as this was his adopted country of residence

The guests that came in were select and the community that formed that day boasted of a diversified group of families; industrialists, businesspersons, writers, artists and art connoisseurs; a brilliant mix of people. The artworks on display, on loan from the families, evoked much nostalgia which was felt by those who were present for the opening night. 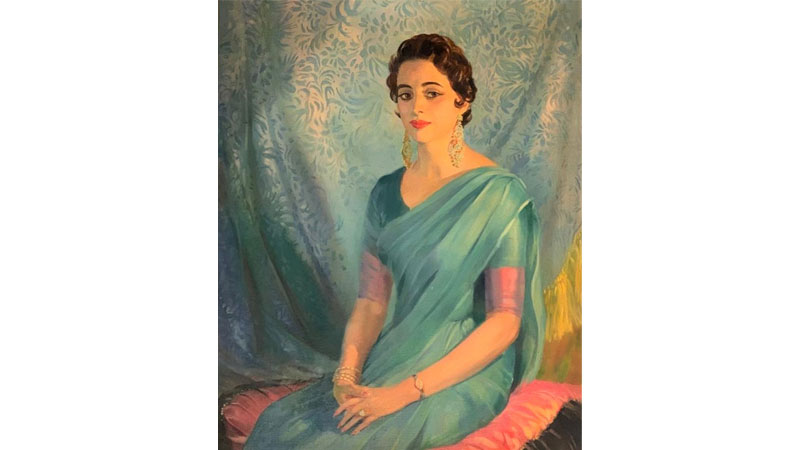 Romano Karim Yusuf had started researching the artist a few decades ago, when he first came across a portrait done by him at the house of a family friend, in Lahore. As he stared at the portrait he noticed the eyes, elongated painted neckline and the strokes which compelled him towards it. The curiosity which turned into a passion has led Romano to almost 30 years of research; trying to connect the dots of what happened to an artist whose art seemed to be hanging on several families’ walls, including several distinguished members of the Pakistan government and army, yet there was nothing written about him on record.

A seven-year-old Romano remembers a seated gentleman painting away on the grounds of the Rawalpindi Club. “Uncle Hal” as he was fondly called, became a family friend of several of the families he painted. He was conversant in ‘Urdu’ as this was his adopted country of residence.

Qaisra Ahmed whom he also painted, recalls her family sending him and his wife gifts every Christmas. Her portrait was commissioned by her father when she was sixteen years old. She remembered how it took them several sessions to complete the portrait and how as a teenager she found it difficult to sit still. Uncle Hal would then converse with her and would make her laugh, as he painted his beautiful subject.

The ‘sitting’ back in those days could not have been easy. No photographic facilities being used or methods save for actually being seated for three days; it also required them to sit for 3-4 hours at a stretch. Each expression captured and preserved would be an essence of the character as one looked at the seated subject whose personality was captured by an expression; a fleeting glance, giving an inkling perhaps of their innermost thoughts.

Each portrait gave a story, just that flourish of some drama and one could sense the nature of the woman looking at you as she was captured in time. One wondered did the families of the models choose him, or was it the other way around? 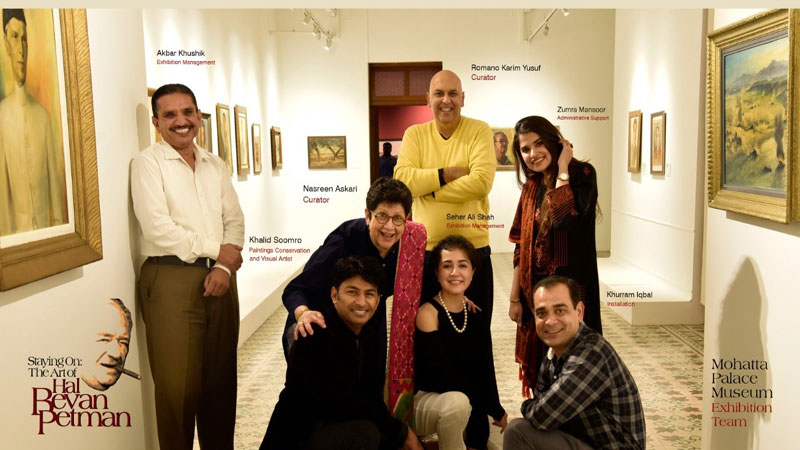 The third room of the exhibit had a viewing of a documentary, starting from the history of the artist as well as interviews of ladies who had sat for their portraits from the ’50s till the late 70s. What a great collection of not only artworks but also information that had been missing about the artist.

Certainly, exhibits of this nature are a great addition for the Mohatta Palace Museum portfolio of events; a truly engaging show and refreshing new addition to the Pakistani art scene.

As I gazed at the portrait of the elegant Mrs Bashir Saigol, I wondered at this precious heirloom which now resided with one of her children. It dawned on me that Romano and the Mohatta Palace team had brought to the rest of Pakistanis a small piece of history and an aspect of culture; a wonderful walk into the lives of the people who had been part of an almost forgotten history, when portraiture was done in the classical style of a traditional oil painting, once considered and respected as an art form.