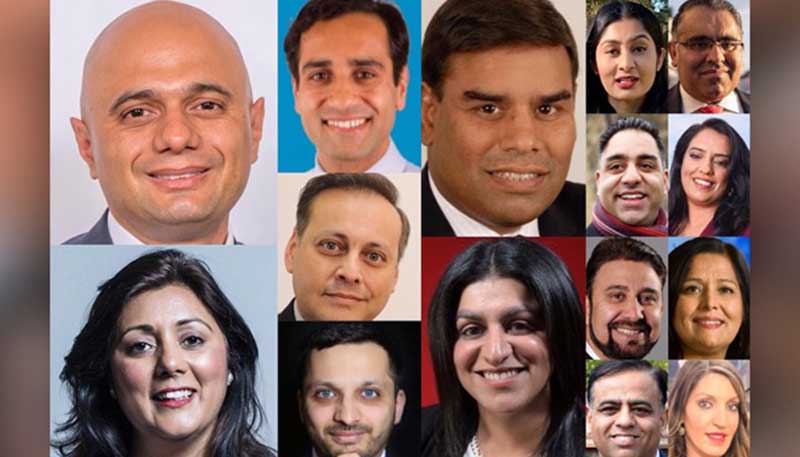 Fifteen British-Pakistanis have been elected as the members of parliament (MPs) in the UK general election held on Thursday, the record number of Pakistani-origin candidates elected in the history of the UK.

The Conservative Party also known as Tories has clinched a historic general election victory, winning 364 seats, including five by British Pakistan, securing a clear majority to bring back Boris Jonson as the Prime Minister of the country. The main opposition –

Labour Party – won 203 seat, including 10 by the British-Pakistanis.

Area-wise, 6 candidates of Pakistani origin have been elected from the Midlands area of the UK. Those elected include Labour’s Khalid Mahmood from Perry Bar Birmingham (elected 6 times) , Shabana Mahmood from Ladywood Birmingham (elected 4 times), Tahir Ali from Hall Green Birmingham and Zara Sultana from Coventry South. Similarly, current Chancellor of Exchequer Sajid Javid as a Tory candidate has retained his Bromsgrove seat, a town near Birmingham. Conservative’s British born Pakistani Saqib Bhatti has won the seat of Meridian near Birmingham. The 34-year-old has the distinction of becoming the youngest and first Muslim president in the 205 history of the Greater Birmingham Chamber of Commerce (GBCC).

In London, Labour Party’s Dr Rosena Allin-Khan retained her tooting constituency of London. This seat was previously held by current Mayor of London Sadiq Khan since 2015. From Bedford, Labour’s Muhammad Yasin has been re-elected as an MP, while Muhammad Afzal Khan was also re-elected with a huge majority from the Manchester Gorton constituency, a safe Labour seat. Yasmin Qurashi of Labour managed to hold her Bolton South East Seat which she has held since 2010.

From Bradford East and Bradford West, Labour’s Imran Hussain and Naz Shah were re-elected as MPs. Imran Ahmed Khan, a Conservative Party candidate whose family belongs to Nowshera district in KP, was elected as an MP from the Wakefield constituency, a seat held by the Labour Party for 87 years since 1932. Khan is the only Tory elected MP of Pakistan origin from the Yorkshire and North of the UK .Tories MPs Nusrat Ghani and Rehman Chishti were also able to hold their East Success and Gillingham seats – both are Conservative safe seats.

However, Labour’s Faisal Rasheed lost his Warrington South seat, a town near Manchester. Rasheed was elected as an MP in 2017 elections, however this time he could not win, the only incumbent MP of Pakistani origin who could not win his seat.

Jemima Khan’s brother Zac Goldsmith lost his Richmond Park seat. Richmond Park is one of the rich and posh areas of London. Zac was defeated by the Liberal Democrats candidate Sarah Jones Olney by a majority of more than 8,000 votes.