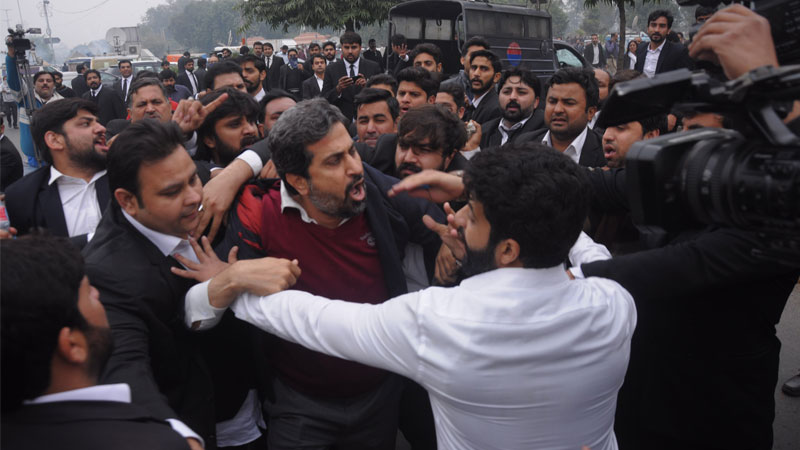 The Punjab government on Wednesday claimed that the Pakistan Muslim League-Nawaz (PML-N) was behind a ‘conspiracy‘ to create lawlessness in the province by using lawyers in attack on a key hospital in Lahore.

Addressing a news conference following the violence at the Punjab Institute of Cardiology, Information Minister Fayyazul Hassan Chohan, flanked by Punjab Law Minister Raja Basharat and Health Minister Dr Yasmeen Rashid, said PML-N activists were involved in creating chaos in the city. He said a known PML-N activist was present among those lawyers who attacked him outside the PIC, adding that the mentioned political worker can be spotted in several photos with Maryam Nawaz and Hamza Shehbaz. A list of PML-N workers involved in the attack has been shared on social media, he added.

“This was a conspiracy to create lawlessness in Punjab under the umbrella of the lawyer community,” Chohan said. He also paid tribute to lawyers including Aitzaz Ahsan and Ali Zafar “who accepted on TV that the lawyers should have respected my role as an arbitrator and allowed for things to be settled.” “This is the mark of a true guardian of the law,” he said, expressing hope that the lawyer community will continue to keep its distance from the ‘black sheep’ and protect its reputation.

Law Minister Raja Basharat announced the government’s decision to fully prosecute all those involved in the violent protest at the PIC. “I assure you all, the government will see to it that no concessions are made,” he said. “The government cannot allow anyone to take the law into their own hands. Those who tried to, will be held accountable.”

He said that in this regard, Chief Minister Usman Buzdar has instructed that the lawyers who were involved and others who have been identified in video footage of the protests ‘will all be prosecuted’. “He has clearly stated that no one who took the law into his hands will be spared and legal action of the strictest kind will be taken against them,” he added. “There is a need to end the high-handed culture which has begun to take flight,” he said.

The minister, reiterating the government’s stance, said that while doctors and lawyers are both respected members of society, they can never be allowed to take the law into their hands. He said a two-tier investigation has been launched into the incident. Part of the investigation will focus on whether the police’s negligence in enforcing the law had a role to play.

Basharat said that the situation had been simmering since November “and the appropriate circles were not taken into confidence or apprised of the developments”. A separate investigation into this will take place, he said.

The minister condemned the mistreatment of Chohan and Rashid as they tried to defuse the situation at the protest venue. “Their presence at the hospital was evidence of the fact that the government tried their utmost to not remain detached from the situation,” he said, adding, “Had they not been present, we could have witnessed a far worse outcome.”

The law minister asked lawyers to show restraint. “If they are able to show contrition for their wrongdoing, their honour will not be diminished.”

Asking doctors too to exercise restraint, he urged them to call off their decision to boycott hospital emergency wards. “Those who come seeking treatment are at no fault. For innocent citizens to bear the cost of someone’s high-handedness will be a great injustice,” he added, and also revealed that 39 people have been arrested in relation to the attack by protesting lawyers.

Separately, Special Assistant to Prime Minister on Information and Broadcasting Firdous Ashiq Awan likened the lawyers’ attack to that of Gullu Butt, who was one of the main vandals in 2014 protests.

She said the perpetrators of the attack will be badly punished, adding that the ‘black sheep among lawyers will be exposed’.