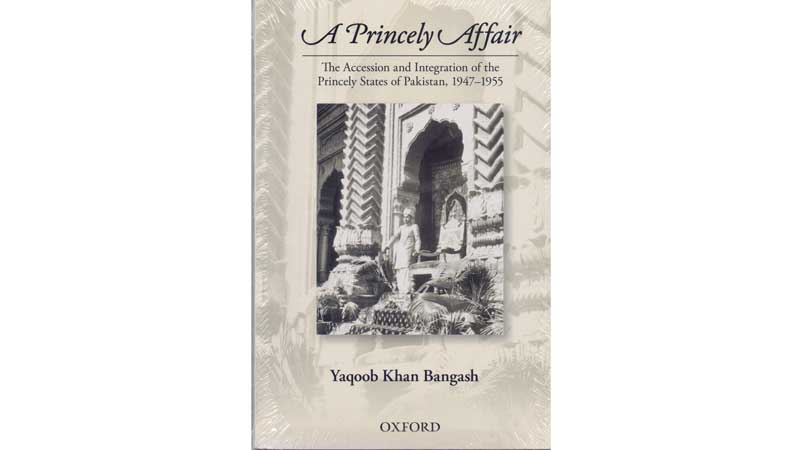 A Princely Affair has encapsulated the warp and woof of the princely states and their nature of relationship with British India and its successor dominion.

The History of the princely States of Pakistan has always been an unexplored road for the students of history, let alone for those who scribe history. Dr. Bangash has produced a ground breaking work on the accession of the Princely states with the Dominion of Pakistan. He has – in this unprecedented stride – gleaned sources which have not been used hitherto to produce the magnum opus.

In addition to the genesis of the princely states and the pre-Partition milieu, it has also juxtaposed the idiosyncrasies of the princely states of India with that of Pakistan. The dichotomy between the nature of the states have been clearly pointed out – there always existed a stark contrast between both. The state of Bahawalpur, claimed her lineage from the Abbasside Caliphate. The States of Baluchistan and the Frontier did not emulate the Mughal grandeur. Contrary to the nature of the Indian states – which had been earmarked as antique, successor and warrior states – the States of Pakistan were completely a different case.

Post third June plan, India jockeyed to integrate the fragmented princely states to the Indian Dominion. However, Pakistan maintained a laissez faire attitude towards the accession of the states. The reason behind this dormant attitude is that the lodestars of Pakistan enmeshed themselves in ameliorating administrative, structural and refugee conundrums.

The first state to accede to Pakistan was Junagadh in the extremity of Gujrat. The book has produced an account of the Politics of the Kathiawar region which elucidates the tryst of Junagadh with her peripheries and the ultimate occupation of it by the Indian dominion. Furthermore, the Khasi hill states and Dujana’s endeavour to accede to Pakistan also became a fiasco due to geographical contiguity with India and the passiveness towards the affairs of the Princely states.

Post June 3 plan, India jockeyed to integrate the fragmented princely states to the Indian Dominion. However, Pakistan maintained a laissez faire attitude towards the accession of the states. The reason behind this dormant attitude is that the lodestars of Pakistan enmeshed themselves in ameliorating administrative, structural and refugee conundrums

“In 1976, by the 26th amendment in the Indian Constitution, Indra Gandhi effaced the dogma of privy purses as old and redundant. However, Pakistan supplanted the privy purses with the maintenance allowance which shows a palpable relation with the princes hitherto”

The relationship between the Indian Political Department with the Princes continued after the partition. The continuum of the bureaucratic representation of the centre in the princely states was retained by the Dominion of Pakistan. However, with the passage of time, the urge to appoint natives followed by the demand of democratic reforms augmented the process of Integration to the de novo dominion.

Kalat – an erratic case study for the integration process – went through vicissitudes till it reached an instrument of accession with Pakistan after Kharan and Sardar of Makran decided to accede to Pakistan, whilst the Khan himself was confounded. Initially, Jinnah himself dealt with the Khan, but soon it was dealt with the bureaucratic legerdemain. The state of Kalat had an uncanny relationship with the predecessor – the British India.

The Durbar of 1877 and Khan’s predilection for the British proved to be the turning point between the twain. Khan elicited a separate banner for himself – like that of other princely states – and the British bedecked him with the Knight Grand Commander, the most exalted Order of the star of India. And, of course! some gun salutes.

This Gubernatorial practice – after integration – worked in the Indian Dominion. However, In the Dominion of Pakistan, the government did not adopt a homogenous policy regarding states and differed from state to state – the Government introduced reforms in the states of Khairpur and Bahawalpur forthwith. In a result, the first elections based on universal suffrage were conducted in Khairpur. On the other hand, the government was reluctant to introduce reforms in the Princely States of the Frontier. This gave totalitarian control to the rulers.

The book has also highlighted the metamorphosis of the princely subjects into citizens of the state. This issue, inter alia, has scarcely been taken up in the modern course of history. The educational reforms introduced in the states improved the literacy rate in the states. It has also given us an account of the provenance of the challenges faced by Pakistan in Baluchistan.

The writer is a teacher based in Lahore. He has done his masters in Islamic History and can be reached at asadiampakistan@gmail.com