Johannesburg and Cape Town — a taste of South Africa 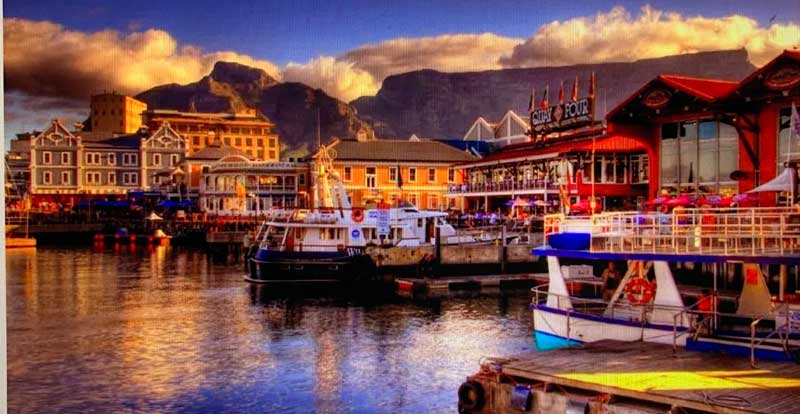 I found myself in South Africa a few years after Apartheid ended. Prior to the visit, I had been combing through news coverage of the country. Carjackings, sometimes in the driveway, were pervasive, as were hold ups and muggings. Houses were routinely broken into.

The Hilton Sandton had broken glass on top of the fences surrounding the property. A big shopping mall was just a short walk away but I decided staying inside the fortress was the much better option.

For the next couple of days, I would take a taxi to the client’s offices in Megawatt Park, participate in the meetings and then head back to the hotel. On the third day a client offered to take me and three others to a uniquely South African restaurant in the Greater Johannesburg area, in a place called Muldersdrift. It lay on the road to Pretoria, the national capital.

The drive took us through countryside and I began to wonder if we might encounter the Big 5 – lion, leopard, elephant, rhinoceros and Cape buffalo. We didn’t. They probably lived in the deep jungle.

The driver exited onto a side road and drove past a big sign which read Carnivore. The name put me off since I doubted that the meat would be halal. It was part of the Kenyan chain. Dinner that night would have to consist of a couple of side dishes (assuming they had some) and bread.

In the center, charcoal grilled game and domestic meats was being skewered on Masaai swords and cooked to perfection over an open fire. You could choose from venison, crocodile, beef and pork. We were taken to our table and told that the food would be served in waves.

The first trolley arrived with meat of all colors and sizes. I was delighted to spot fish and vegetables on the skewers and that’s what kept me from starving that evening.

The trolleys kept on coming every 15 minutes. I was full after a second helping and two of the three in our group filled up after the third. The fourth kept on going. Then he was warned by the others that he would not live to see the sunrise if he kept on going at that rate. He took the hint, smiled and stopped indulging his palate.

For the next couple of days, I would take a taxi to the client’s offices in Megawatt Park, participate in the meetings and then head back to the hotel. On the third day a client offered to take me and three others to a uniquely South African restaurant in the Greater Johannesburg area, in a place called Muldersdrift

On the fourth day I took a two hour flight to Cape Town with a client. We chatted about the unique culture and diverse history of the country. At some point the discussion turned to the topic of illegal immigration. He said the immigration police are posted at the major roadways but the best agent for controlling illegal crossings was the African lion. I said you lost me there. He said many people try to sneak in through the jungle but that’s where the lions gets them. That sounded too gruesome to be true.

“To get some background, you should check out the film, ‘The Ghost and The Darkness.’ And after you have seen the film, go and visit the Field Museum in Chicago.”

After the meetings in Cape Town, he took me to the Albert and Victoria Waterfront. It was dotted with restaurants and boats and reminded me of Fisherman’s Wharf in San Francisco. The iconic Table Top Mountain loomed in the distance.

The next day I was supposed to do a safari through Kroger National Park but circumstances changed, requiring me to fly home the next day.

At the airport, just as I was about to board, the airline upgraded me to first class. That 10-hour flight on South African Airways remains the best in my 42 years of flying. The purser made my bed, gave me pajamas to change into for the red-eye to Heathrow, and served extraordinary food. That’s how life was supposed to be lived at 36,000 ft. in the air.

A few months later I was in Perth in Western Australia. The breeze from the Indian Ocean took me back to the days of my youth in Karachi. A colleague drove me to a park atop a hill which afforded stellar views of the city. Then he took me to a restaurant. The bar tender turned out to be South African. I spoke about my short visit to that country. He said things have changed quite a bit since the end of Apartheid.

He recalled the many techniques for subduing crowds that the South African police in those days had at their disposal including a multi-barreled shot gun. He jokingly said it was called the Crowd Pleasure. He added, they also were trained in the martial arts.

Once a passenger got drunk on a long flight from Jo’Berg and turned into a nuisance for other passengers. When he got up to use the restroom, the purser delivered a sharp blow to the carotid artery in his neck. The man was rendered unconscious, taken back to his seat, and buckled up. About a half hour before landing be woke up and did not remember what had happened. The attendant, he said, was a former police officer like him. I wondered if he was the officer.

When I got home, I saw the “Ghost and Darkness” movie. It was about two man eaters in Kenya who were preying on railroad workers that had been brought in from India. They were hunted down by an American hunter. The following year I happened to be in Chicago and checked them out at the Field Museum. Stuffed up, the two lionesses looked small and harmless.

Years passed. A political thriller, “To Catch a Fire,” came out showing how life under apartheid created insufferable conditions which led to a country-wide revolt. The film was a testimony of the cruelty of man to man.

South Africa fascinates endlessly. When the next opportunity arises, I will begin the journey at home by re-watching Zulu, the all-time classic, and learning a few words of Afrikaans, an amalgam of Dutch-Malay-Zulu-Xhosa-English. When I arrive in Johannesburg, I will check out the Apartheid Museum, possibly catch a test match, fly to Cape Town and go the Waterfront and to the top of Table Mountain, and leave enough time for going to see the Big 5 in the wilds of Kroger National Park. And when it comes to food, I will head to sample the venison biryani at Carnivore.

The writer can be reached at [email protected]. He Tweets at @AhmadFaruqui