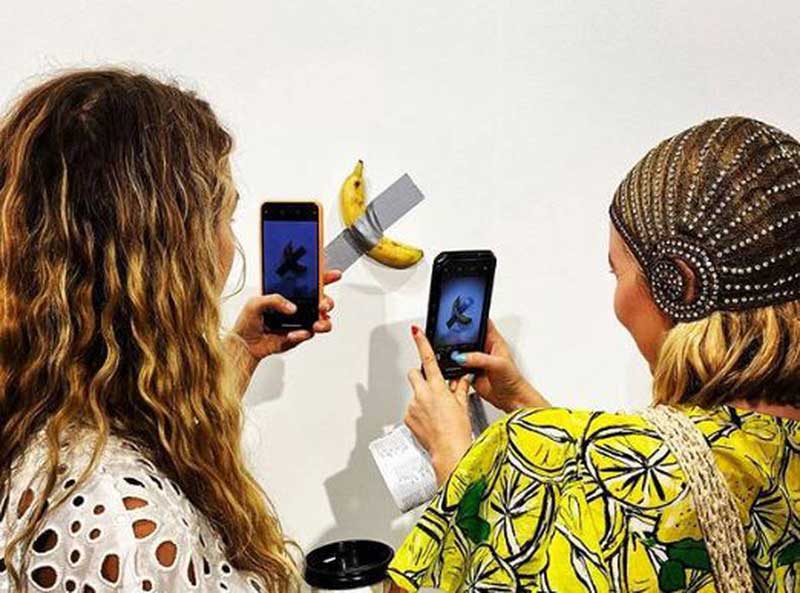 Leave it to Maurizio Cattelan. The first flight of VIP collectors had barely arrived at Art Basel Miami Beach, the art fair that some call the “Running of the Billionaires,” and the satirical Italian artist had already won the battle for Instagram.

All he needed was a banana and some duct tape. In a gesture straight out of the Duchamp playbook, Cattelan emerged from productive hibernation with his first sculpture created for an art fair in 15 years. The piece, titled “Comedian,” was the endpoint in a creative process that saw him cycling through renditions of the fruit in resin and bronze, before settling on the real thing.

Now more than ever at this fair, art dealers ship in their choicest inventory; Cattelan’s competition included Picasso, Basquiat and Georg Baselitz. Still, minutes after the gun went off for a VIP preview Wednesday morning collectors were already making a beeline for the Galerie Perrotin booth and Cattelan’s banana, offered in a limited edition of three with one artist’s proof, at a cost of $120,000 apiece.

Few settings seem better suited to absurdist gesture than Miami Beach, a place where humans stroll around wearing high heels and bikinis, where there is always room for another “V” before the name of a boldface guest at a VIP event, and where even the trademark palm trees look like fright wigs on sticks.

A lot can be said for the improvements that have elevated the cultural tone of this resort town. Once a depopulated de Chirico landscape of decaying art deco structures backlighted by Technicolor skies, the city has finally lived up to its own overheated hype.

New museums have opened. Established ones have matured. In the 17 years since Art Basel Miami Beach was inaugurated as a kind of pre-Christmas break for the private aviation set, the fair itself has settled in and become more staid, its opening hours less frenetically like a scene out of “Supermarket Sweep.”

“Back at the beginning, there was this idea of billionaires stampeding, like Black Friday at Macy’s, chasing after million-dollar items,” said Andy Hall, 68, an English hedge fund mogul once described as “the most successful oil trader” of his generation. “It was as if dealers were doing you a special favour by inviting you to see the item earlier.”

“All the galleries now send you PDFs, and for three or four days before the fair your inbox is swamped by emails from all the usual suspects peddling their wares,” Hall added.

Few settings seem better suited to absurdist gesture than Miami Beach, a place where humans stroll around wearing high heels and bikinis, where there is always room for another ‘V’ before the name of a boldface guest at a VIP event and where even the trademark palm trees look like fright wigs on sticks

It is, after all, a trade fair. Yet unlike most auto or boat shows, this one inspires a spate of commercial satellites and a frenzy of tie-ins, with liquor brands, real estate groups, app developers and fashion labels all piggybacking on the ephemeral concentration of HNWIs, or high-net-worth individuals.

Even before the fair opened, there were “disruptions” and “activations” – to use the dubious rhetoric of the culturally complacent – going on throughout the city and parties everywhere.

One, held by Snapchat and Gucci, celebrated a new tech gizmo and Harmony Korine, the film director; another, a Fendi handbag that smells (albeit of a fragrance created by Maison Francis Kurkdjian, the Parisian perfumers); a third, sponsored by the National Basketball Association, gathered vintage kicks, throwback jerseys and all sorts of sports-related art that speak to the enduring influence that basketball has had on contemporary art.

At a party held Tuesday in a 4,100-square foot space in downtown Miami for Socialista, a pre-revolutionary Havana-themed club run by a 29-year-old scion of the Cipriani clan, mambo played and hand-rolled cigars were distributed to guests. “My generation needs parties where you can talk to people, where the music is not so invasive,” Maggio Cipriani said.

Maybe so. You could not have proved it by Dior Men’s fall 2020 show Tuesday night. The clamorous event was staged in a vast warehouse opposite the new Rubell Museum, 100,000 square feet of linked industrial structures in Allapattah, a working-class neighborhood filled with modest housing, auto repair shops and light industry.

As recently as 2002, when Art Basel Miami Beach was inaugurated, this neighborhood, bound by Interstate 95 to the east, was considered desolate and sketchy, the kind of place where, legend had it, mobsters were dispatched before their bodies were chopped in half and ditched in the Everglades for alligators to do their work.

Now, Allapattah (the word is derived from the Seminole Indian term for alligator) is being burnished as the next Miami arts district, with as its anchor the stupendous collection of contemporary art amassed over decades by Mera Rubell and her husband Don, whose brother Steve was a founder of Studio 54.

“I was thinking about references from Christian Dior, 1955 to 1963, and a lot of the sketches were of Miami and Florida in this early age of the Jet Set,” said Kim Jones, the creative director of Dior Men. “It was an incredibly glamorous time.”

For this collection Jones collaborated on graphics with Shawn Stussy, the surfer, skateboarder and streetwear entrepreneur, and drew on the branding savvy that makes him one of fashion’s top guns for hire. Whether or not a market exists for python Dior short-shorts, there is little question that the bags and sweaters and bucket hats scrawled with Stussy’s neo-graffiti Dior should keep the lights on at LVMH, its parent company, for quite a while.

And someone has got to pay for extravaganzas like the one in Allapattah, for which roughly 2,000 invited locals turned up in their tropical glad rags, joined by a raft of jet-lagged fashion journalists flown in at corporate expense. These types are typically characterized as friends of the brand, though this is perhaps meant in the sense of a friend to whom you say, “Your money is on the dresser.”

There was shapewear magnate Kim Kardashian and her sister Kourtney, as well as Kate Moss, Bella Hadid, Luka Sabbat, Playboi Carti, Pusha T and David Beckham, the soccer god who would seem to have exceeded his reasonable use-by date as a commercial commodity.

There was Honey Dijon, the globe-trotting DJ, and, as a surprise performer at the after-party, Orville Peck, the gay Canadian country singer whose rise must be a result of the photogenic Lone Ranger mask he affects and not his vocal skills. 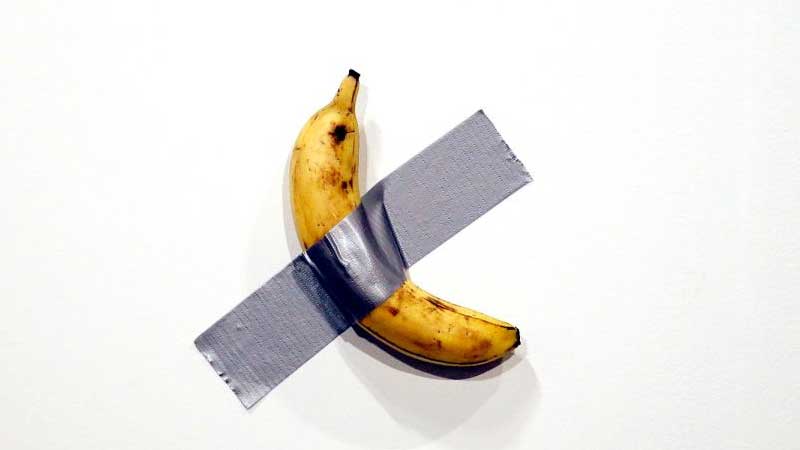 Instagram strikes once again. “We left immediately after the show,” said Michael Shvo, a real estate investor, referring to the Dior hullabaloo. “People don’t care if things are fun anymore. They care how it photographs.”

This truth is well understood by Shvo. In 2019, he and two investment partners purchased Miami’s beloved Raleigh Hotel – scene of a thousand fashion shoots – from Tommy Hilfiger for $103 million. They then snapped up two adjacent properties in order to create a new mixed-residential and hotel development to be set behind 3 acres of lush oceanfront gardens.

With Art Basel Miami Beach as his deadline, Shvo commanded the creation of the Raleigh Gardens in just under a month. This unlikely sanctuary, set in a flood plain and open this week to the public, has bamboo groves and koi ponds and sinuous gravel paths ornamented with sculptural bronze animalia by French artist Francois-Xavier Lalanne and his wife Claude.

Set alongside or tucked into the greenery by Raymond Jungles, the landscape designer, with the help of Peter Marino, the architect, are life-size sheep, two tortoises, an elk, a ram, a frog, a human-size owl, a rabbit, a gorilla and – down a hidden path – a fully-dressed bed with a canopy of bronze monkeys.

“It’s a magical space,” Jungles said Wednesday as dusk approached and softened the tropical light filtering through the palm fronds. It did, this reporter noted, seem like a setting for making a certain kind of magic. “Yeah, but there are cameras everywhere,” he said.

Indeed, it is the tiny camera lens that, more than anything, has forever altered the forum for art, said Matthew Higgs, director of the White Columns gallery in New York, and an annual exhibitor at the New Art Dealers Alliance, a satellite fair that is a favourite among savvy insiders.

“Digital media, social media and the rise of the fairs changed the market narrative,” Higgs said. “The art world in the late 20th century was still conditioned or determined by a gallery as the primary place of encounter. In the fashion world, things are now live-screened contemporaneously and sold immediately and there is an idea that you don’t need to see these things in person.”

Still, Higgs said, no experience beats experiencing art for yourself, in person, in analogue space. And that belief was borne out by the buzzy atmosphere that prevailed in the main hall at the Miami Convention Centre during Wednesday’s VIP showing.

The big shark collectors – each guided by a personal remora, or art adviser – stalked works like an $8.5 million Calder mobile (Helly Nahmad Gallery), a $1 million oil on lead by Günther Förg (Galerie Max Hetzler) and a $5 million landscape by Georgia O’Keeffe (Menconi and Schoelkopf). One forlorn couple stood in front of a set of Julie Mehretu monotypes (White Cube) they had missed buying by seconds for the relatively bargain price of $40,000 apiece.

“Sure, there are those who come with a list,” said Angela Westwater, the seasoned gallery owner, referring to showy “wall power” works by brand-name artists that are favoured by hedge fund investors. “Mark Grotjahn is on the list obviously, and Christopher Wool and Rashid Johnson,” Westwater said of three artists whose work has recently set auction records and remains in hot demand.

“Bruce Nauman is not a trophy name,” Westwater added, referring to the multimedia artist that her gallery, Sperone Westwater, represents and whom many consider the greatest American artist alive. “There are imbalances there, shall we say? Maybe it’s your moment and maybe it’s not. If you’ve been doing this long enough, you learn that it always cycles around over time.”