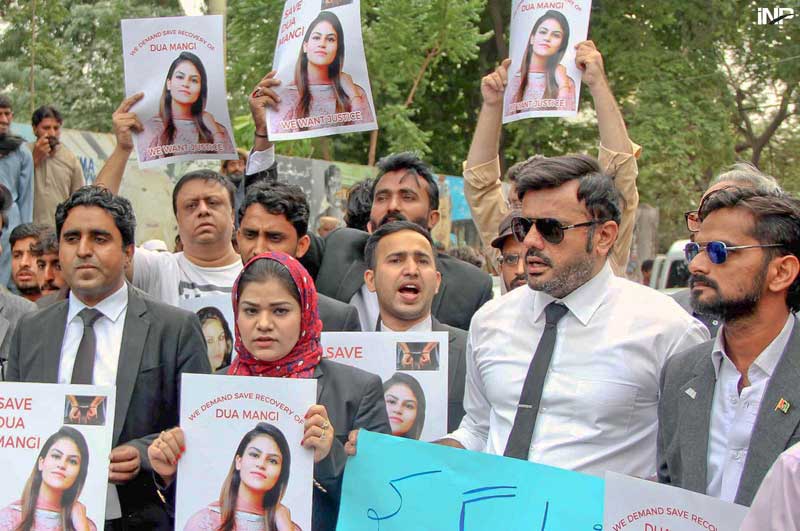 The police have released their first official statement regarding Dua Mangi abduction case, stating that they have taken around a dozen suspects into their custody.

Spokesperson Sindh Police said in a statement that the detainees were being investigated in connection with the kidnapping of Dua. “The Citizens-Police Liaison Committee (CPLC) is assisting the police in this regard while an investigation team headed by DIG South has been formed”, he added.

The police requested the public to provide any information regarding the case to Madadgar 15 helpline.

Earlier, the audacious gang of kidnappers, claiming to hold 20-year-old female student Dua Nisar Mangi hostage, had demanded ransom from her family for her release, police sources revealed to the media on Wednesday.

Dua’s family members received suspicious phone calls on the internet from suspected kidnappers, and subsequently informed the police about it.

After that information, police have widen the scope of investigations into the case, and have been examining previous kidnapping for ransom cases to trace any evidence for the suspects. Many previous unresolved cases are also being investigated. The case has shrouded in mystery as no whereabouts of the abducted girl could be traced yet and the concerned officials are still clueless about the suspects in

However, an investigation team tasked to probe the shocking kidnapping of Dua has claimed to achieve some progress in the case after finding a car that resembles the car in which she was taken away at gunpoint.

Senior Superintendent of Police (SSP) East Naveed Kamal told the media that the car has been found from Karachi’s Shahrah-e-Faisal.

Later, the investigation team rushed to Shahrah-e-Faisal for inspection of the car and the surrounding area, and found nobody to claim its ownership. Police have decided to perform forensic examination of the car.

Officer Kamal further told the media that suspects might have left the car at the place after kidnapping Dua. According to earlier report, the perpetrators took off with Dua in a grey Honda Civic, the model of which was around four years old.

Police have also investigated the cell phone data of both the victims and geo-fencing of the site will also be carried out. Police also obtained eight different CCTV footages of the incident and have obtained statement of a rickshaw driver, who is claimed to have seen the incident.

The CCTV footage shows Dua and Haris walking down the street minutes before the incident. In the other footage, the kidnappers are seen taking the abductee with them. Dua was kidnapped at gunpoint from Karachi’s DHA Bukhari Commercial Area and her friend Haris was shot multiple times when both were strolling along the road after Dua had attended one of her friend’s birthday party.

Later, Sindh Chief Minister Syed Murad Ali Shah and Sindh Inspector General of Police (IGP) Dr Kaleem Aman took notice of the incident, and ordered immediate inquiry into the alleged kidnapping. Investigation officers have been ordered to use all means to trace the culprits and recover the girl safely. They have also assured the families of the two victims of their full support and cooperation.

Soon after the incident, multiple posts went viral on the social media, spreading shocking wave and panic amongst neighbourhoods of the region.

An FIR was registered at Darakshan Police Station against unidentified men, under Sections 324 [attempted murder] and 365 [kidnapping or abducting with intent secretly and wrongfully to confine person] of the Pakistan Penal Code, on behalf of the injured man’s father.

The FIR stated that Haris, the friend of the abducted girl, told their family that he was going out to meet his friends.

The injured boy was rushed to a nearby hospital for medical attention, whereas the girl was whisked away by armed kidnappers. Haris, wounded in the incident, was initially taken to the National Medical Centre but later moved to the Aga Khan University Hospital. He, still in consciousness, immediately contacted his father and informed them about the incident.

It is the second major kidnapping incident of a girl in the DHA. Earlier, another young girl was kidnapped in the same manner in May this year and was later released after her family paid a handsome ransom to the kidnappers. Agencies