Dengue 2019: The challenge and the response

It is through the relentless efforts of a dedicated, multi-disciplinary team that dengue outbreak of 2019 in Pakistan has winded down quickly, much earlier than the usual estimates – and it is not just due to change of weather. As I write these lines, the number of cases from Islamabad – where highest figure was reported this year – has come down by 90%, which means we have saved 20,000 people from becoming dengue patient. Sitting at the tail end of the epidemic, it is important that we reflect on this enormous challenge, the way we responded and the lessons we have learned for future.

This year, Pakistan saw the maximum number of dengue cases in its history. As of November 16, about 49,500 cases have been reported, way bigger than the previous highest tally of 25,000 in 2017. But Pakistan is not alone. Other countries with similar climate and socio-demographic factors have also had a much bigger share this year. Philippines for example, reported 322,693 cases compared to the 149,849 cases during 2018. Bangladesh had 10,148 dengue cases in 2018, which have climbed up to 81,839 cases this year. This escalation is due to a combined effect of factors like climate change, evolution of the virus, crowded homes due to growing population, rapid urbanization, the usual dengue cycle in which cases increase every 3-5 years, and increase in travel.

The second part of the dengue challenge came from the twin cities of Islamabad and Rawalpindi. Although cases were being reported from other parts as well, maximum numbers belonged to these two cities during September and October. Why? Because the predisposing factors like population growth, rapid yet unplanned urbanization, and increase in slum populations with inadequate hygiene and sanitation had a confluence here during the past decades. The results of 2017 census show that out of all provinces and regions, Islamabad has had the maximum annualized growth of about 5%, as its population increased from 0.8 million to over 2 million. Being the city with maximum number of slums, its unplanned and overcrowded semi-urban settlements like Tarlai and Sohan provided a favorable environment for spread of the mosquito-borne virus.

The third part of the challenge was the fragmented health system in Islamabad that has been there for decades. Traditionally, this system has comprised of two parallel streams: one for urban Islamabad under CDA, while the other for rural areas managed by the ICT administration. None of these has had a properly designed primary healthcare system; a critical requirement when it comes to managing disease outbreaks like dengue. Moreover, minimal collaboration existed between health system and other operations like sanitation and environment safety that have a direct implication for health. After assuming the responsibility for healthcare in Islamabad since November 2019 (Healthcare under CDA/MCI still with Ministry of Interior), the Ministry of National Health Services, Regulations and Coordination (NHSR&C) is developing and implementing the ICT model health care system. The response to the dengue outbreak was informed by this model.

A comprehensive response to an outbreak usually has three streams. These include the outbreak response, vector control, and health services.

In terms of the outbreak response, the NHSR&C immediately established an Emergency Operations Cell (EOC) for dengue at the National Institute of Health (NIH) Islamabad. The cell coordinated with all provinces, collected data, issued advisories and disseminated situation report every day, making it available in the public domain. The NIH provided technical assistance and laboratory support to provinces for ascertaining the circulating serotypes in different geographical zones. A 24/7dengue helpline was established for any queries, complaints and suggestions. To identify all cases from twin cities, an enhanced surveillance system was created, which included private sector and other non-reporting sites, in addition to the government hospital reporting the cases being attended there. That meant a huge increase in reported cases from twin cities resulting in major critique of our work however it was important to know the full extent of outbreak to launch an effective response. 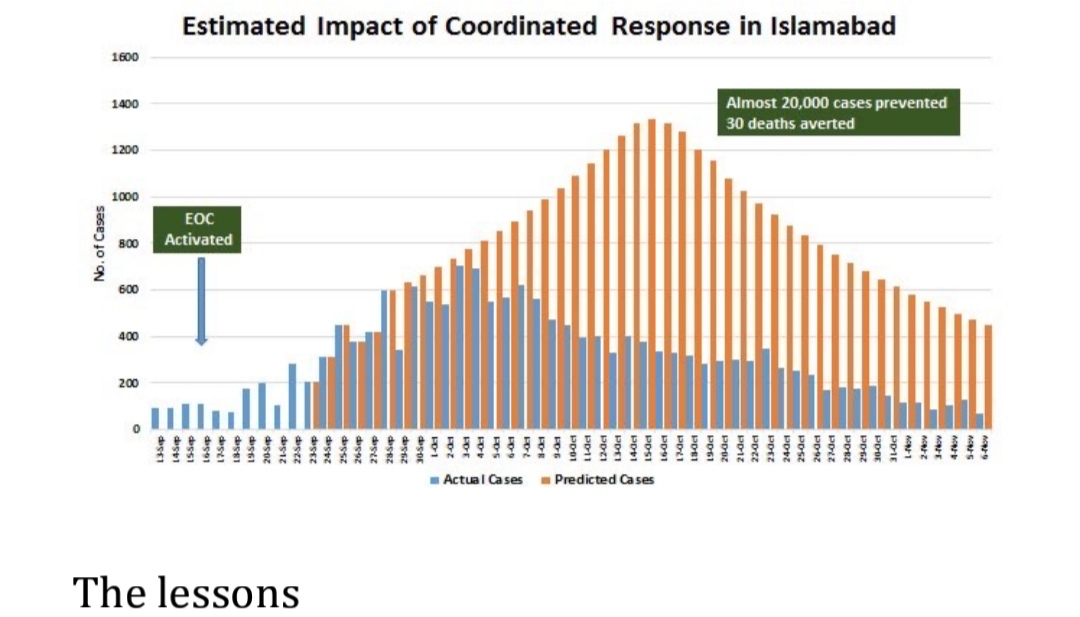 An integrated approach was adopted for vector control. The Search and Destroy teams of health department carried out sustained sweeping activities in all affected areas. Initially there were six such teams, but as the outbreak amplified, the number of response teams also increased reaching up to 93 during the peak days. A response team included three members: one health staff educating the family, while two others looking for potential larva sites and destroying them along with doing indoor residual spray, in the potentially infected houses. This was supplemented with vehicle mounted fog machines to carry out daily morning and evening fogging in areas that reported new cases in significant numbers. As part of the drive against dengue, the sanitation department of the Metropolitan Corporation Islamabad (MCI) removed around 50-60 tons of solid waste every day from rural Islamabad, even though these areas did not fall in their purview. This was in addition to the 500 tons waste removed from urban Islamabad- areas with high number of dengue cases received priority- for which they are mandated.

For dengue patients, dedicated beds were allocated both in public and private hospitals of Islamabad and the quality of clinical services was vigorously monitored. The observed case fatality rate therefore, stayed below 0.2% i.e. well within the limits of <1% targeted by the WHO. All new cases were immediately identified from public and private hospitals through active surveillance and systematically linked to immediate community-and household-level response. Dengue counters and wards were established in public and private hospitals, with focal persons assigned to ensure best clinical services to the patients. Provinces also managed their dengue cases well with Punjab and Khyber Pakhtunkhwa providing free treatment to all patients. Owing to their weather condition, Sindh started having cases a bit later than the other provinces, but with 13458 cases till day, has actually surpassed the other provinces and regions.

Although each element of our response was important, two of them are highly significant.

First is the establishment of a high level, dedicated team comprised of experts from various fields that met every morning from mid-September onwards, including over the weekends. I personally chaired daily early morning meetings of this high level multidisciplinary response team comprised of entomologists, epidemiologists, clinicians, public health experts, and environment and sanitation professionals to assess the situation and respond in real time. Colleagues from Rawalpindi also traveled every morning to attend this meeting where we discussed the Rawalpindi data and made strategic decisions in real time. Out of the 33 dengue outbreaks that Pakistan has witnessed so far, this was the first outbreak that saw such a consistent effort at the highest level and its profound effect on performance of the staff from top to bottom. I also spent time with our hardworking frontline colleagues to appreciate and support them.

Second was a critical decision about the diagnostic approach for Islamabad. This year, an active surveillance system was adopted for Islamabad, which uses NS1 test that captures dengue cases with greater precision, compared to other diagnostic approaches that have less accuracy. Higher numbers captured especially during the earlier phase, allow for rapid response not only to the dengue patient but also the adjoining community, reducing the chances of further infections. It was this diagnostic approach, coupled with efficient clinical care and rapid response at the community and household level, that we were able to avert about 20,000 cases and 30 deaths (see figure) in Islamabad. This figure shows the number of probable cases (predicted) that would occur if a rapid response was not generated, versus the real number of cases (actual) that have been reported during the current outbreak in Islamabad.

First lesson is that diseases like dengue are multifactorial and response to their outbreaks has to be multi-sectoral. Health departments can cater to patients but the responsibility of preventing people from disease mainly lies with other departments. Addressing the rapid population growth, unplanned urbanization, poor sanitation conditions and environmental management is essential as they provide favorable conditions to the dengue mosquito. Above all, it is the households and communities that need to take care of their health, hygiene and water storage practices to avoid the dengue infection.

Secondly, we witnessed that germs do not respect geographical boundaries and a central coordination mechanism is essential to curb the disease outbreaks. The present burst of dengue clearly showed that post devolution, the coordination for communicable disease surveillance and response has not shaped up like a coherent system. An appropriate preparedness did not exist despite the successive alerts issued by NIH during March, May and July for a potential dengue outbreak this year. In this backdrop, the central coordination mechanism worked well this time and needs to continue to prevent interprovincial and international transmissions.

Moreover, it is very important that principles of science are adhered to and reality is not denied. Politically speaking, the adoption of active surveillance through NS1 seemed less prudent: political pundits could twist this high number of cases from a city like Islamabad in different ways. But our epidemiologists and public health experts were convinced that active surveillance would enable us to capture maximum cases in quick time, allowing the diagnosis and treatment of patients and case response in their community. We stuck to this scientific approach and it paid off. Hearing about our effective strategy this year in ICT, other countries facing a dengue epidemic like ours have started contacting us to share details of our approach and its implementation.

Last and the most important lesson is the realization that we can do this. Throughout this phase, we have applied local wisdom and local resources to deal with this epidemic. The quick curtailment of an epidemic that once looked ominous brings a sense of fulfillment and pride. At the same time, we understand that complacence is not an option. That is why, the Ministry of NHSR&C has already embarked on a policy decision to develop a well-designed national programme for vector-borne diseases. InshaAllah, the implementation of this programme will comprehensively address dengue and other similar diseases in future.