‘The Irishman’ — a privilege to witness so many stars together

* Martin Scorsese's first film for Netflix,'The Irishman' brings us back to the 1970s and '80s with Robert De Niro, Al Pacino, Joe Pesci and Harvey Keitel 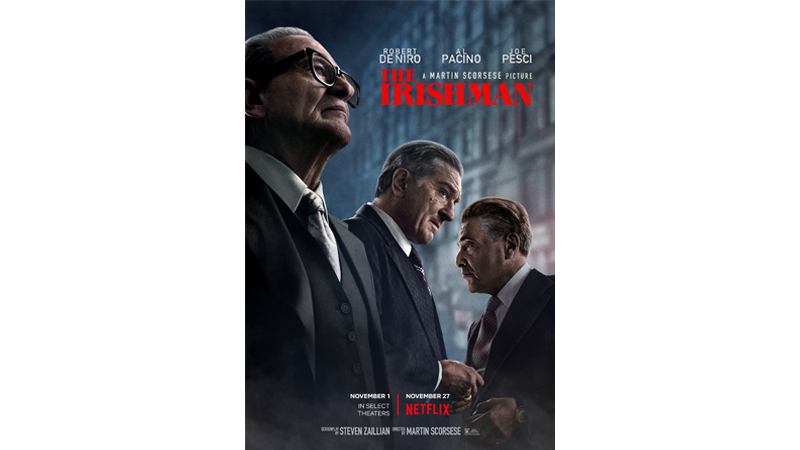 ‘The Irishman’ is based on the book I Heard You Paint Houses by investigator and writer Charles Brandt. The plot revolves around World War II veteran and then the truck driver turned criminal Frank Sheeranand his camaraderie with influential people like Russell Bufalino and Teamster Union boss Jimmy Hoffa. Frank narrates the story for audience in nursing home in his wheel chair and recounts his time as Mafia hitman. First forty minutes are slow but exciting, Frank is introduced as WWII veteran who is stuck while driving food delivery truck and eventually happens to meet mob boss Russell Bufalino. Under his mentorship Frank becomes ruthless action man. Later Frank is introduced to Jimmy Hoffa, and their relationship grows. During this period Frank is suspected by his daughter Peggy, who somehow is aware of her father’s involvement in murders and their relations struggle till the end. Peggy was attached to Hoffa more than Frank and Russell. In 1975 when Hoffa disappeared, Peggy believed that it was her father behind the disappearance of Hoffa and at the end Frank was waiting for her daughter to visit him at nursing home. Sheeran told Brandt on his deathbed in 2003, that he was actually behind the disappearance of Hoffa and killing him with two gunshots. Sheeran confessed that he Hoffa’s body was burned to ash at nearby crematorium, which explains why his remains have nerve turned up. In the book Sheeran said, “When Jimmy saw that the house was empty, that nobody came out of any of the rooms to greet him, he knew right away what it was, he reached for the knob and Jimmy Hoffa got shot twice at a decent range”

‘The Irishman’ is based on the book I Heard You Paint Houses by investigator and writer Charles Brandt. The plot revolves around World War II veteran and truck driver turned criminal Frank Sheeran and his camaraderie with influential people like Russell Bufalino and Teamster Union boss Jimmy Hoffa

The political messages are oblique, but the core message of Scorsese is about corruption of American life and the impossibility of combating- if only because the alleged watchdogs, up to and including Presidents, are, in turn, so easily corrupted-comes through loud and clear. It’s hardly an original message but Scorsese (like Godfather’s director Francis Ford Coppola before him) dissects these dynamics with exquisite precision.

The Irishman is magisterial mob epic in which Scorsese has brought back the lost charm of gangster movies the movie is executed in the same manner as Goodfellas (1990) and the cinematography of The Departed (2006), though cinematography of The Departed was done by Michael Balhaus, whereas Rodrigo Prieto has done The Irishman, but the style remains same. Prieto constructed personalize tools that captured infrared map of the actor’s faces, because actors were playing the elder character than their actual age, and the scenes that didn’t require digital “Three Headed Monster” were switched to 35mm film. Prieto and Scorsese stuck to simple frontal frames and plain pans. The Production comprised 9 cameras, 309 scenes, 117 locations and 108 shooting days. It is most expensive film of Scorsese career. The CGI de-aging looks fine but still the aging actors struggle to revive their potential. In one scene where Frank Sheeran roughs up a corner grocer for shoving his daughter that scene was very hard to watch as De Niro struggle as much with his own lack of mobility to carry off the fight scene realistically.

I will not speak of the direction of Martin Scorsese; his style remains rigorous, and his formula of combining comedy, violence, brotherhood, drama continues to work; fact is he continues to make excellent movies even though he is 76 year old. Robert De Niro gives best performance in his older age, but Al Pacino was electrifying and fluent enough to use the word ‘fuck’ as he had uttered in his times, his usual shoutyself shines and better when he tones it down and let expressions speak itself. Joe Pesci is real deal; he was different, sharp-witted and sensible unlike his desperado performances in Goodfellas, Casino and Raging Bull: if you are looking for violent Joe Pesci as he was in Goodfellas, you’ll be disappointed, but he remains intimidating Pesci. With these guys on screen you see true power of art.

First two hours of film went like a breeze, third hour was little slow and dragging. But kudos to Scorsese for bringing the living legends together. It will most likely be the last of its kind and last collaboration of these legends with Scorsese, because it was widely reported that Joe Pesci was asked around 50 times to appear in this film after his retirement. It is possibly last Pesci film.

‘The Irishman’ is saddening farewell for most of these legends. Feel privilege to witness these stars together.