The ‘red in colour’ March could easily fall capitalist’s prey

The recent student’s solidarity March for the “restoration of student unions”, remained one of the heated debates on social media. However, the mainstream media, once again, pledged it’s loyalty to the ruling elite with a complete media blackout of the event. Likewise, the public response was typically horrific—attired in the traditional and conservative hatred, through stereotypes and character assassination of the protesters. 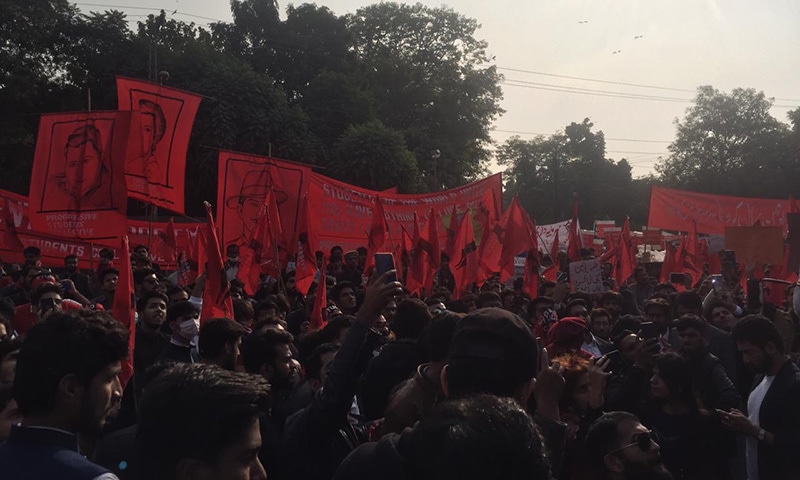 Nevertheless, the movement was first of its kind in the recent history of Pakistan that has managed to mobilise a reasonable number of students countrywide.

Historically, the ruling elite has remained triumphant to depict a notorious picture of such student bodies. During dictator’s era of the 1980s, weapon culture, drugs and violence were introduced into these Unions—as a prerequisite policy— subsequently, led to the ban of these unions.

Resultantly, the ruling elite had gotten rid of a potential pressure group, henceforth, the unions or student politics became a dreadful activity on the campuses and elsewhere.

Additionally, after decades another Dictator emerged on the realm to introduce de-facto type of student organizations, more the offshoot of mainstream political parties then student’s representatives. Such student organisation further divided the student on linguistic and regional ground, and on the basis of their mainstream political affiliations. Now, that students were systematically politicised while, subverting their political consciousness, they were channeled towards different corporate blocks, party vote banks and other misdirected activities, portraying, what student politics could mean. On the other hand, Ideology and critical thinking: a prerequisite condition for “political innovations” to deal with emerging issues were deluded from the student’s academic, social and political life.

Consequently, in the public sphere, the youth was discouraged to indulge themselves in such politics, through the notions of career-building, academic professionalism and intellectual channeling. The incarnation of this very glass-ceiling into the student’s life was equally distractive to already subverted genuine student-voices. However, the capitalist’s version of democracy has always remained sympathetic towards such fragile student organisations to gather popular support, meanwhile, labeling the genuine-voices as an act of high-treason.

Turning back to the recent student March, it’s obvious, a change in the society is about to burst out in one form or another, but which shape it is going to adopt is not clear. An extra-ordinary, version of ideologues, with leftist ideals while remaining part of basic capitalist structures are really behind this Marches. Albeit, it has managed to precipitate one of most active agents (youth) of the society, but lacking the basic ideological schooling: that capitalist structure is one, which subdues ideology, with the huge magnitude of the matter. surprisingly, undermining the tiger of materialism, such fragile ideologues are most liable to become the running deer: “she thinks she could run-escape, but the tiger knows better, he will hunt her down”.

Moreover, the same chunks of the youth bugle who were previously providing the fuel for Aurat March—the liberal version of feminism—- making the issue more about sexes than anything. In a partial feudal society, the robust third wave of feminism didn’t win any rights for the women living in most parts of the patriarchal society. Consequently, adding more notoriety to the actual feminist-voices. Likewise, the same actor s are behind the recent Student March, with a post-modern liberal mindset.

In a net shell, the liberal ruling elite is really trying to bridge ‘ideological-left with the material right’. On the contrary, even after decades of struggle, exploitation and suppression, today the genuine student-voice is once again at the juncture; where it is most obvious to fall prey.

Additionally, indeed going for a radical change, in the capitalist notion, wouldn’t work for the perpetual well-being of the students, in spite of a more delicate process with structural transformation, and without ignoring the material conditions of the society is an urgent demand. Although the recent Student March is the beginning of a change, the outcome is yet not certain.

The writer is a student of Master’s in International relations from international Islamic University, Islamabad