Children of a lesser God

The Sunday of 15 March 2015 descended upon the inhabitants of Youhanabad like a perpetual misery. This misery that has descended upon them is like termite and it’s eating them inside out. In last four years, these inhabitants of Youhanabad became hollow vessels, hollow vessels that are filled inside with sorrow. The sanctuary of God was filled with people of God on March 15, 2015. 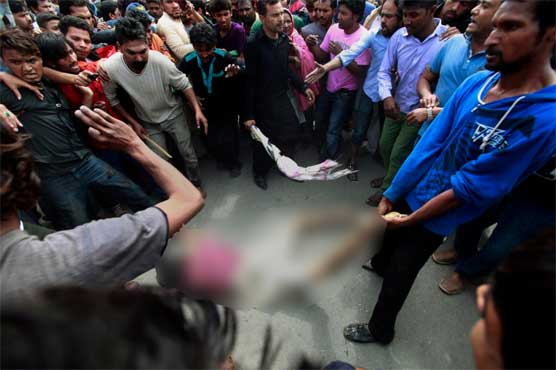 Some people settled in the sanctuary of God for redemption and some just turned to the temple on that day as a routine while some came just to be close to God. The acre of God was laced with not only spiritual tranquilization but also with the certainty of wellbeing. In the middle of the sermon, the blare of collision startled everyone. Before people of God could even comprehend the situation the window panes shattered with a loud bang and that was enough for everyone to know that they were in danger.

Suddenly everyone started looking for their loved ones. The taste of blood and metal ragged in the air foretelling the tale of martyr hood, prophesying the loss of loved ones. In between panic and fright, the back doors of the church were unlatched and the elder of the church led everyone outside while the pastor stayed inside ensuring the safety of everyone.

In the rage of chaos, some people of God lost control that day. Riots were led and in those riots, violent people accumulated. This riot caused havoc and somehow they thought they had captured terrorists. The one who had captured the terrorist is still anonymous and no one knows who led this whole riot but as a result of this riot, the men who were portrayed to be terrorists were lynched. This lynching and uncontrollable riots are a pattern that has been encoded within our systems. It’s a way of fighting the evil in Pakistan. This whole scenario was the magma and the volcano was yet to erupt. The people of God as a demand for justice came on streets they started protesting for justice and for the culprits of their loved ones. For 2-3 days it continued. The media kept reporting that police are not able to control the riots and in the end, rangers were called to control them. On 22 March the police began to arrest the people of God.

Somehow the police that wasn’t able to control them were now fully capable of raiding homes of people of God. The raid usually began after midnight. People of God even became familiar with the raging knock of the policemen. The streets became vacant. All one could hear at that time in the streets of Youhanabad were sirens and the cries of the families who have lost their loved ones. In this living graveyard, the weeping echoed at night and the sirens reverberated in the day time.

The police captured God knows how many men because police don’t have a record of them. If the family claims the police took their loved one the police simply don’t record them. And who knows what they would have done with the ones who aren’t present in the record. The ones who are present in the record, have been suffering for the last 4.5 years. Months after they were captured their families had no clue where they were. They kept mourning for their living dead.

After the twin blast, the people of Youhanabad were never portrayed as victims. We took that away from them or maybe they snatched that away but they are still the victim here. The men of Youhanabad are still behind the bars, and they are suffering every day. And their families are being and have been tormented for the last 4.5 years. These families and their untold stories scream for justice. The men who died as martyr cry for justice. The families who lost their loved ones beg every day for justice.