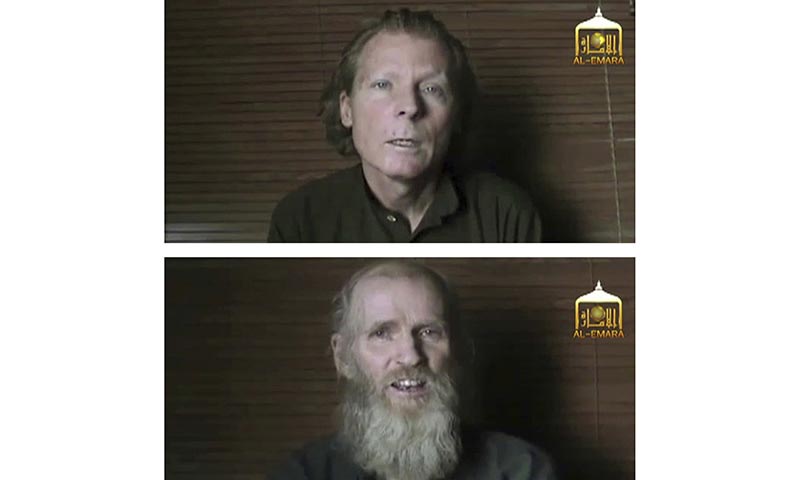 Hours after three Taliban prisoners landed in Qatar, the Taliban handed over two foreign hostages to the American officials in southern Zabul province on Tuesday under a swap deal that is seen as major step towards the resumption of the stalled peace process.

Taliban prisoners were flown out of Afghanistan to Qatar on Monday after they were released from the Bagram jail, according to Taliban officials.

Afghan President Ashraf Ghani announced last week to release Anas Haqqani and two other leaders from the Bagram prison under a prisoner swap deal that he hoped will help in the peace process.

The Taliban and the US Secretary of State welcomed the prisoner swap agreement in statement issued Tuesday evening.

He said in a statement that these actions are a step forward in good-will and confidence building measures that can aid the peace process. He thanked the Emir of Qatar, his Minister of Foreign Affairs and other officials who exerted efforts in this process from the onset and provided all necessary facilities.

US Secretary of State Mike Pompeo confirmed the release of the two professors in a statement. “Today, the United States welcomes the release of Professors Kevin King and Timothy Weeks. Both men were successfully recovered this morning, are in the care of the U.S. military, and will soon be reunited with their loved ones,” he said in a statement.

“The Taliban have indicated that the release of the two professors is intended as a goodwill gesture, which the United States welcomes. Additionally, we welcome the Taliban’s impending release of 10 Afghan prisoners, and the Afghan government’s release of 3 Taliban prisoners,” Pompeo said.

He viewed these developments as hopeful signs that the Afghan war, a terrible and costly conflict that has lasted 40 years, may soon conclude through a political settlement.

Meanwhile, Prime Minister Imran Khan has welcomed release of the US and Australian professors Kevin King and Timothy Weeks in Afghanistan.

“We appreciate steps taken by all involved to make it possible,” Khan tweeted on Tuesday.

He said as part of the international community working to bring peace and end the suffering of the Afghan people, Pakistan has fully supported and facilitated this release.

He said Pakistan is supporting initiatives for a negotiated political settlement of the Afghan conflict. He said Pakistan hopes this step will boost the confidence of all the parties to re-engage in the peace process.

He tweeted that the U.S. officials reiterated their support for President Ghani’s decision and committed to work closely together to respond to any possible Taliban violence in the event the group don’t respond in good faith.

“Both sides agreed that a ceasefire and/or a reduction in violence was a necessary pre-condition for kick-starting the intra-Afghan negotiations to reach a political settlement,” he said. Seddiqi said both the Secretary and Ambassador O’Brien praised the performance of the Afghan security forces including their ongoing efforts in eliminating Daesh safe havens in Nangharar, and reaffirmed continued American support to these forces so that Afghanistan can never again be used as a platform for international terrorism.