The Struggle for Pakistan — tumultuous but eventful

* 'History in Pakistan has been reduced to a jumble of clichés,' the author writes 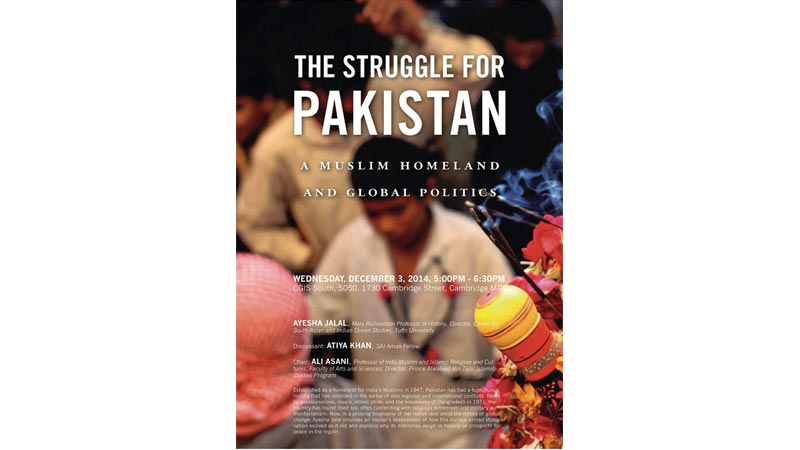 Ayesha Jalal is a Mary Richardson Professor of History at Tufts University. She is also the author of The Partisans of Allah – Jihad in South Asia and a number of other most erudite scholarly pieces on South Asia in general and Pakistan in particular.

This book is mostly recommended for those who want to have an impartial insight and interpretation of the tumultuous but eventful history of Pakistan.

“History in Pakistan has been reduced to a jumble of clichés. Pakistanis receive their schooling in ideology that aims to reinforce the belief in constructed national myths” writes Ayesha Jalal in the prologue of the book.

“The Pakistan that came about is not the Pakistan that M.A Jinnah wanted all along” claims the author “rather he wanted something more.” Mr Jinnah wanted equitable, if not equal, share of power for Muslims at all India level. The Pakistan that came about was twice rejected out of the hand by the founding father as “a truncated, moth-eaten and mutilated Pakistan”, first in 1944 and then during 1945-46 elections. “It was Congress that imposed its will on the AIML” the author contends. At the ending tail of the British rule, it was put in plain words: either accept the Pakistan that was on offer: comprised of divided Bengal and Punjab provinces or to abandon the demand completely and join in the Indian Union. A wide spectrum of evidence and historical records from the British sources and post-independence archives has been provided in the book to support the argument.

A staunch anti-colonial nationalist who devoted his life for winning the freedom from the British, Jinnah in 1916 had hailed the All-India- Muslim league as a “powerful factor for the birth of United India.” “As late as 1937, he was more interested in forging a political alliance with the Congress Party at the all-India level than striking dubious deals with the Muslim politicians in the Muslim-majority provinces.” Ayesha writes in chapter one of the book “From Minority to Nation”.

Pakistan is a country that was born amidst pools of blood and tragic violence. Pakistan at its very inception was envisaged to last no longer than a mere six months, either to vanish from the map of the earth or to rejoin the Indian union. Among a myriad of other challenges faced by the incipient state the most pressing was of the resources needed to defend the new country.

Moving forward Jalal writes, “Before the die was cast in 1947, the British Joint Chiefs of Staff had questioned the wisdom of carving out a state from the northwestern and northeastern parts of subcontinent that would have to pay the same amount for its defence as undivided India with far fewer economic resources at its disposal.”With 17.5% of the financial assets and 30% of the defence forces of the undivided India Pakistan was ill-equipped to meet its defence costs. Ayesha Jalal explains our tilt towards the western-powers in the Cold-War politics and clasping America’s hand in the war against the Soviet Union more as “out of sheer need” to defend ourselves against a regional rivalry with India on Kashmir and an Afghanistan, denying the Durand line, than any other factor.

In her analysis, Jalal moves towards deductive reasoning when she cites the issues of national security and sovereignty as the key reasons to have attenuated elected institutions in the strength.

In one of his most wicked prophecy the last British viceroy, Lord Mountbatten put it in a blunt metaphor: “administratively it was the difference between putting up a permanent building and a hut or a tent. As far as Pakistan is considered we are putting up a tent. We can do no more.” The author deplores that although Pakistan survived against all the odds, but still failed to be replaced with a permanent building, instead it transformed into a breeding ground for the non-elected institutions to come and call the shots.

While elaborating on the dismemberment of Pakistan in 1971 and the establishment of Bangladesh, Ayesha Jalal writes as far as the mistakes are concerned, certainly we have made a lot during the course of our history. We need to revisit them to inform our present and future of their consequences. “The word Pakistan is an acronym in which P stands for Punjab, A for Afghan (north-west-frontier-province), k for Kashmir, S for Sindh and Tan for Balochistan.” The author writes “there is no mention of Bengal province at all.”This explicitly describes the Center’s commitment to its largest province.

The author views that the 1971 debacle cannot be entirely blamed on foreign factors without taking our own shortcomings into account.

In late 1960 Zulfiqar-Ali-Butto visited Dacca and declared the Bengali demands for provincial autonomy as “in the best interests of Pakistan” and criticized the bureaucrats for calling the Bengalis “kala Admi” or literally the black men. Bhutto said all six points of Mujeeb-u-Rehman were acceptable to him except two. In chapter six, “The Rise And Fall Of Populism” the author writes, “picking up the pieces of a dismembered and demoralized country was a monumental task that fell on the eager shoulders of Zulfiqar Ali Bhutto, a self styled populist who had already anticipated criticism of his role in the breakup of Pakistan.”Soon after military action in East Pakistan, Bhutto wrote about the six points of Bengali demand,” There was little to distinguish a loose federation, confederation and near-independence.”

“Even though the idea of Bengali nation was imbued with new cultural and linguistic meaning since 1952, the scope and form of the state that could embody the idea remained open to negotiation until March 25, 1971” interprets Jalal.

In chapter seven “Martial Rule In Islamic Garb” the author articulates,” As the hot and sultry night of July 4 made way for the dew-soaked dawn of July 5, 1977, early morning risers in Pakistan heard on the 6:00 a.m. radio bulletin that the armed forces had taken over the country’s administration and placed the top political leadership under ‘temporary protective custody'”.

While elaborating her own interest in studying history Ayesha writes in the preface of the book, “The swift transformation of Pakistan in the name of Islamic ideology defined by an unpopular military dictator propelled me toward studying history both as a methodology and as a discipline.”

In chapter nine “A Geostrategic Riddle” Ayesha portrays a picturesque view of the coup d’état imposed by General Musharaf in the following words: ” On October 12, 1999after the announcement of Musharaf’s dismissal as chief of the army staff on national television, the screens went black, the martial music erupted against the backdrop of soldiers marching in patriotic earnestness.” Ayesha opines that the takeover had followed the script for the state of martial rule pioneered by General Ayub Khan, and fine tuned by General Yahya Khan and Zia ulHaq.

While summing up, in the epilogue of the book, Ayesha Jalal takes satisfaction with a great deal of cautious optimism regarding the future prospects of Pakistan. She writes, “For all its litany of woes, Pakistan is not going to disappear from the map of the world in a hurry. Although there are innumerable challenges, internal and external, the situation has not altogether gone off the rails. Power equations have changed, and Pakistan’s state of martial rule is no longer in a position to exercise power without some combination of political parties to legitimize the arrangement.”

The author believes that a great deal depends on just how well the politicians have learned from past oversights and whether they can strengthen the democratic institutions and improve their own room to manoeuvre on both domestic and foreign fronts.

In the prologue Ayesha Jalalquotes one of Pakistan’s most acclaimed Urdu poets, Faiz Ahmad Faiz:

“Speak, for your lips are free

Speak; your tongue is still yours,

Your upright body is yours.

See how in the blacksmith’s shop

The flames are hot, the iron is red,

Mouths of locks have begun to open,

Each chain’s skirt has spread wide.

Speak, this little time is plenty

Before the death of body and tongue:

Speak, for truth is still alive_

Speak; say whatever is to be said”

The writer can be reached at salalameen@gmail.com