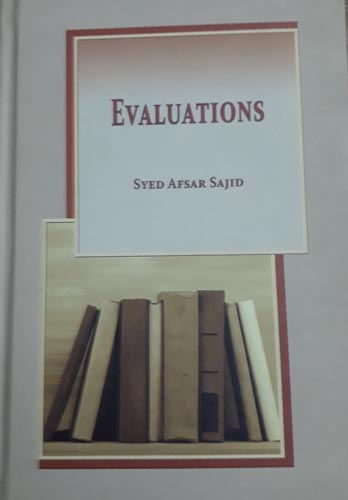 A book titled Evaluations is the third collection of book reviews after Perceptions and Appraisals as a natural corollary to these anthologies by Syed Afsar Sajid.

Ejaz Rahim, a renowned name in literature has written the prologue to this book. The purpose of writing this book is simple; to promote the cause of books and culture, literature and arts. Ejaz Rahim emphasizes on the fact that newspapers base their readability more on scandals, murders, political turmoil, explosions, collisions etc. and less on Arts, Literature. Syed Afsar Sajid’s book therefore is a lamp of public education as it offers information on the contents, gist of readable books. Eighty seven reviews published from time to time have been selected for this book.

The first part of the book selects great poets Iqbal and Faiz in one section. Both deserved separate sections, their ideologies being different, one with a larger canvass and unlimited variety of topics inducing awakening of the Muslims of the East and the other enhancing the cause of socialism, the only common factor being poetry but of divergent natures. The other commonality is that both hailed from Sialkot (Page 19). Two books on Iqbal, the first by Atiya Begum and the second titled ‘Revisioning Iqbal as a poet and Muslim Thinker’ by Gita Dharampal-Frick, Ali Usman Qasmi and Katia Rostetter have been reviewed. Regarding the first book the author from Bombay known as a musicologist and waven is linked with Shibli Naumani and Iqbal for her intellectual camaraderie. Apart from the book carrying Urdu and Persian poems it contains eleven letters written to her. The blunder is that the hand writing of some poetry and letters is not that of Iqbal, Informs the author.

The book Revisioning Iqbal as a Poet & Muslim Political Thinker is a collection of revised version of papers presented by historians, linguists and scholars of Iqbal studies at an interdisciplinary international conference at University of Heidelberg on November 9, 2007. They have focused on comparative analysis of two poems by Iqbal and Goethe, Muslim Spain as a leitmotif in Iqbal’s poetry, images of Iqbal and Tagore in Germany, Iqbal’s dialogue with the West and so on

The book Revisioning Iqbal as a Poet & Muslim Political Thinker is a collection of revised version of papers presented by historians, linguists and scholars of Iqbal studies at an interdisciplinary international conference at University of Heidelberg on November 9, 2007. They have focused on comparative analysis of two poems by Iqbal and Goethe, Muslim Spain as a leitmotif in Iqbal’s poetry, images of Iqbal and Tagore in Germany, Iqbal’s dialogue with the West and so on. Iqbal’s book ‘Iqbal Rediscovered’ is based on Khurram Ali Shafique’s two books covering Iqbal’s inception (till 1904) and creative (1905-1913) days. These two books are the first two among sic voluminous books on Iqbal’s biography by Iqbal Academy. The reviewer is sceptical about some of the contents and leaves it to the end-user to decide upon the receptivity of the stuff presented (page 08). The last sub-section of the book under review presents two books ‘Iqbal-Saheb-e-Afkaar-e-Javedan’ by Kh. Hameed Yazdani and ‘Kashf-e-Zaat Ki Aarzoo Ka Sha’air’ by Tariq Habib. It is emphasized that universality of Iqbal’s creative might and message is stated to lie in his triangular response and perhaps the first fully articulated response from the Islamic world, to modernity. The means used are his poetry and prose writings presenting basic philosophic insights.

Syed Afsar Sajid contributes a full essay titled ‘The Faiz Saga’ and two book reviews; ‘Daybreak – Writings on Faiz’ by Yasmeen Hameed and ‘Faiz Ahmad Faiz – Chand Nai Daryafetain’ by Ishfaq Bukhari. The latter is the sixth book of Lyallpur Kahani series authored by this noted critic; a painstaking research on Faiz’s private and public life in the backdrop of his link with Lyallpur. In 1951 when as a sequel to his involvement in Rawalpindi Conspiracy Case, Faiz had to be lodged at Lyallpur District Jail for some time when his nephew Prof. Saeed Ahmad used to facilitate his link with his family and outside world.

A voluminous section 2 titled ‘Books on philosophy, metaphysics, history and personal history’ comprises reviews on many books in this field. Subjects such as partition of the subcontinent, metaphysical approaches to religion, modernistic approaches in religion, philosophy and literature etc. have been touched upon. Books on the most popular forms of literature; prose and poetry have been reviewed in sections 3 and 4 respectively. Included are Prof. Ira Hussain’s book on Samuel Beckett, F. Scott Fitzgerald’s book ‘The Great Catsby’, ‘The Valley of Fear’ by Arthur Canon Doyle, ‘The Romance of the Missing Couple – An Epic’ by Nadeem Khan Eudophyze (his creation Sherlock Homes), Muhammad Aslam Butt’s book on Kafka, Babsi Sidwa’s book ‘jungle Walla Sahib’ and some English Translations of selected Urdu short stories. Very interesting inclusion is that of Odyssey by Homer. Afsar Sajid selects poetry of Yasmeen Hameed, Akhtar Raza Kazmi, Syed Nawab Haider Naqvi, Jawaz Jafri, Abbas Tabish (Kulliyaat-e-Murtaza Barlas), Khursheed Rizvi, for his reviews. Interesting sections are titled ‘Composite Reviews including Books of Literary Criticism and Culture and Pakistani English Literature.

Books on book reviews such as ‘Evaluations’ are successful in establishing the fact that so much exists in creative endeavours pertaining to art and literature and reviews offers the readers the books they select from this short listing for detailed study.