The ‘Azadi March’ has entered a complex stage. Some political analysts are claiming that Maulana Fazlur Rehman’s stance and strength is lessening, but some others consider it a part of hisstrategy.Being an astute politician, Maulana must have calculated all his options. The only thing that can be stated with certainty regarding Maulana’s personality is that he is an expert of political maneuvering, and therefore, he keeps his cards secret to be utilised at an appropriate time. 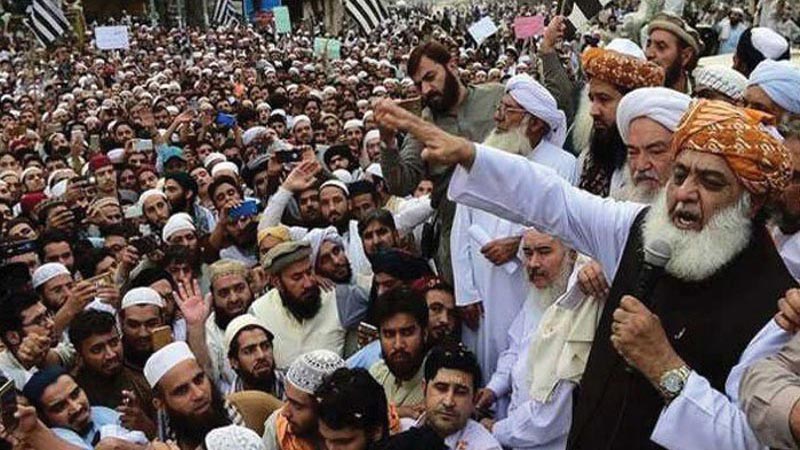 Being famous for politics of compromise and diplomacy, Maulana’s diehard stance regarding Imran Khan’s government and his resignation has a history. It is linked with the culture of political engineering. In Pakistani politics, newly engineered political parties undermine the already established political parties. To substantiate this fact,the PakistanPeople’s Party (PPP) was undermined by the Pakistan Muslim League-Nawaz (PML-N) and Muttahida Qaumi Movement at the centre and province, respectively. The Pakistan Tehreek-e-Insaf (PTI), at the central and provincial level, countered the PML-N.

In the never-endinggame of political manipulations, Maulana and his political party have been affected since the rise ofMr Khan in the politics of Pakistan. Consequently,in winning electoral seats, Maulana’s party was shrunk from the centre to province, and then to some districts.

In such a state of affairs when his political party was shrinking, he was left with two options. One was to remain silent and bear the brunt, and the second was to challenge the perpetrator. Maulana opted for the second option.

Before staging a sit-in in Islamabad, Maulana ardently mobilisedhis people by organising fifteen million marches. He also worked to convince the leaders of other opposition parties. Now the major political parties, the PPP and the PML-N, have alienated themselves from the ongoing sit-in in Islamabad.

Coming back to the current situation of the Jamiat UIema-e-Islam-Fazl(JUI-F)’s Azadi March, the ongoing sit-in is being entitled as a trap and climax of stagnation for Maulana. Convincing his people to stay for more time in Islamabad would reward Maulana with more gains. Maulana mightface failure in his mission to get Prime Minister Khan’s resignation, but he has made some gains.

One, Maulana hasbeen able to attract religious, secular, liberal and nationalist political leaders to his cause. Even thedeparture of the PPP and the PML-Nfrom the protest is not because of the flaws of Maulana but their own political compulsions. They still morally support Maulana.

Two, Maulana popularised himself by launching an ‘anti-establishment’ pad. Ostensibly, Maulana claims that he is not interested to engage in a tussle with the state institutions. At the same time, he is propagating that the institutions should work in their own jurisdiction.

The popularisation of the agenda of strengthening democracy indirectly works in the interest of Maulana and all those who believe in democracy, democratic norms and popular support

Three, although the main opposition leader is Shehbaz Sharif,it is Maulana who hasgiven a tough time to the prime minister. The underestimated Maulana now acts as a genuine opposition leader. Apart from inculcating political awareness in common masses, his political activismwould surely benefit him in the context of political gains in future.

Four, Maulana has popularised the narrative of civil supremacy. The principle of installing democratic norms in true spirit is beneficial for all democrats, including Maulana. In this context, Maulana has disclosed his demands by emphasising ‘respect for ballot’ and ‘holding of fresh elections without the involvement of army’. The prime minister’s resignation isthe ostensible demand of Maulana’s Azadi March, buthe actually aspired to point out the deeply rooted flaws prevalent in the system. He has become successful in highlighting those flaws.

Five, Maulana’s narration of a ‘new social contract’ has generated another discourse. The statement indirectly meant that the constitution is framed to assign a specific working relationship between individuals, individual with state (institutions), and institutions with institutions. In broader perspective, all these documents are signed to facilitate citizens of a polity. The already prevailingsocial contact-if it couldn’t facilitate individuals by fulfilling their needs-should be renewed.

Six, the rise of Mr Khan in the politics of Pakistan has deeply affected JUI-F’s politics. The PTI and the Balochistan Awami Party (BAP) diminished the electoral strength of the JUI-F. The PTI affected the JUI-F both in Khyber Pakhtunkhwa and Balochistan, whereasthe BAP affected JUI-F only in Balochistan. Giving tough time to Mr Khan will automatically go in favour of Maulana and his political party in the next elections.

Seven, the time factor is hugely important in politics and political management. Choosing to have a protest at this time manifests Maulana’s political clear-sightedness. He launchedthe Azadi March when Mr Khan’s political promises have transformed into U-turns. People are suffering because of inflation, unemployment and heavy burden of taxes. And the managerial talent of government is still confused in directing the economic policy.

In a nutshell, the popularisation of the agenda of strengthening democracy indirectly works in the interest of Maulana and all those who believe in democracy, democratic norms and popular support. In case Maulana ends the Azadi March without taking the resignation of Prime Minister Khan, he would still not lose. Under the guise of this demand, Maulana has revealed his innate demand for the institutionalisation of democracy and civil supremacy. It is, therefore, not a fallacy to state that Maulana has gained much and has nothing to lose. When one has nothing to lose one can’t be defeated. The same is the case with Maulana.

The writer is a researcher and columnist