A new trend, which is now starting to blossom into a rich subculture, has been taking root in Pakistan for the past few years. Vaping, as it is commonly known, appeals to mostly bourgeois and upper-class youth. However, its appeal has been lately increasing in all age groups. New shops in plazas around the city are continuously springing up to cater to the growing demand for e-cigarettes. In swanky cafes and restaurants, trendy youth can be seen inhaling from electronic devices and filling the room with fruity scents upon exhaling. They are also quick to clarify the mistaken and less tech-savvy people that it is not smoke, but vapour. Even many police personnel are still ignorant of e-cigarettes; confusing them with shishas and mistaking e-cigarette shops for shisha cafes and lounges. The latest generation of e-cigs, especially from leading companies like Juul, has been likened to the iPhone of cigarettes. They are sleek, modern looking and shaped like a USB device, built to appeal to the tech-savvy younger masses. According to a lung specialist, Dr Javed Khan, the rising popularity of vaping means that roughly five per cent of the country’s teenagers have switched to e-cigarettes. However, it is yet to reach critical mass. The prices of these devices, which can range from Rs 2,000 to Rs 20,000, keep them out of the reach of many smokers in Pakistan. 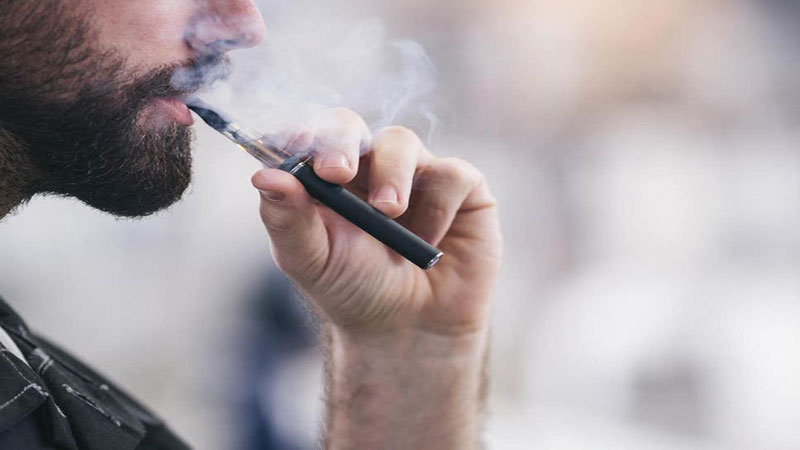 E-cigarettes, as the devices themselves are known, heat a liquid contained in pods and sold separately, flavoured with anything from cucumber to bubble gum and usually containing nicotine, into vapour-hence “vaping”- which is inhaled. They replicate the effect of smoking both chemically (nicotine) as well as the physical and behavioural hand-to-mouth aspect without burning tobacco. E-cigarette use has grown rapidly in the developed world since 2007. The technology has been pushed by producers, and also by some governments including in Europe as a safer alternative to tobacco-and as a way to kick the habit. E-cigarettes allow the inhalation of almost the same amount of nicotine without the harmful tar and carbon monoxide produced by burning tobacco. Tar is an assortment of about 7,000 chemicals with at least 69 directly linked to various cancers.

Many people have switched to e-cigarettes due to health reasons and have seen benefits. Mohammad Talha, 25, made the switch from actual cigarettes to e-cigarettes about 2 years ago. While speaking in an interview with Dawn, he explained, “Although I had been smoking 10-15 cigarettes a day for five years, the switch was easy. In the beginning, you get the occasional urge to smoke a cigarette, but eventually, you don’t miss it at all.”

Talha has seen an improvement in his health. He said that his senses of taste and smell had improved.

In recent years, however, there has been a growing regulatory backlash against the vaping industry. While vaping has helped multitudes move away from conventional cigarettes to a supposedly safer alternative, some medical professionals worry about the lack of availability of long-term usage data for many chemicals present in vaping products, like diacetyl and also propylene glycol, which may be a respiratory irritant. Moreover, there is no standardisation. For example, some brands have a much higher nicotine level with their cocktail of chemicals.

Critics also argue that the vaping culture, with its attractive fruity smells, slick marketing campaigns and rich social media presence is forged in a way to entice non-smokers and has led to a teen vaping epidemic, thus making them addicted to nicotine at a young age. Nicotine, an addictive substance also present in actual cigarettes, can rewire the developing adolescents’ brains making them more susceptible to addiction later in life. Furthermore, studies like the 2017 Truth Initiative survey and a 2015 Stanford study have shown that a lot of them are not aware of e-cigarettes containing nicotine in the first place.

While vaping has helped multitudes move away from conventional cigarettes to a supposedly safer alternative, some medical professionals worry about the lack of availability of long-term usage data for many chemicals present

Recently, India became the sixth country in the world to ban e-cigarettes, the latest evidence of a global backlash against a technology touted as safer than regular smoking. However, the move was seen as hypocritical as conventional smoking and tobacco remain legal. The bans though are mainly a reaction to the outbreak of a mysterious vaping related lung illness sweeping the US, that has resulted in about 1600 cases with 34 deaths. But the exact reason of the outbreak remains uncertain and 90 per cent of the cases were linked to marijuana (THC) containing e-cigarettes with products obtained from informal sources like the black market or illicit dealers seen as the real culprit.

Recently, there have been calls to ban e-cigarettes in Pakistan too. The Pakistan Medical Association wants the government to ban e-cigarettes. “There should be a ban on the sale of e-cigarettes. More young people are using e-cigarettes now,” said PMA Secretary-General Dr Qaiser Sajjad. “We don’t have any data on it,” he remarked. “We don’t even know about any diseases caused by it.” Lung specialist Prof Dr Javed Khan also joined the chorus; calling for the ban. He added, “E-cigarettes are not completely risk-free but when compared to smoking, evidence shows they carry just a fraction of the harm.”

Like in the case of India, such warnings and bans seem hypocritical. Similar warnings have hardly ever been witnessed when it comes to the rampant consumption of actual cigarettes and tobacco. Tobacco consumption in Pakistan is very high, even among children, with an alarming 20 million estimated child smokers. With 160,000 tobacco-related deaths each year and oral cancer being the most prevalent among Pakistan men in all of South Asia, the tobacco industry still faces minimal taxes and levies and little regulations. Shopkeepers openly sell cigarettes to children in school uniforms, with no one to stop them. Therefore, talks of a ban on e-cigarettes seem disingenuous and counter-intuitive at best.

In Pakistan, the e-cigarette market remains unregulated, which means that the quality of the e-liquids on the market have not been checked by a public health body. Regulation of e-liquids seems especially important in light of the recent deaths in the US. There needs to be a standardisation of the basic chemical composition and manufacture process of the pods and limits on the amount of nicotine. More research needs to be done on the psychological and physical effects of e-cigarette smoking, with better regulations and enforcement to protect vulnerable populations because vaping, for better or for worse does seem like the future of smoking.