Exploring the ‘oldest city in the world’

* Although the city is known for its ghats, temples and music, there are many other famous places in Varanasi that must be seen and experienced on your trip 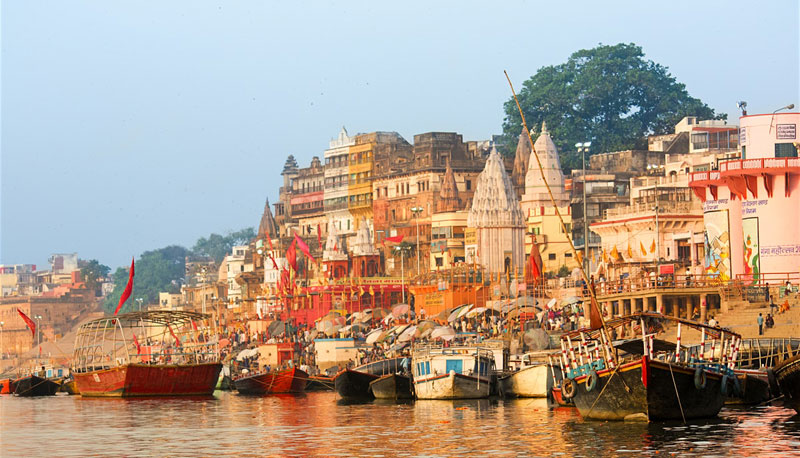 Varanasi’s claim to being the oldest city in the world may still be undecided, but there is no doubt whatsoever that this city is known to every Hindu in the world as a place they must visit at least once in their lives.

The colossal temples & ghats and the other popular places to visit in Varanasi attract millions of tourists year after year. Not only is it a popular destination among the Indian travellers, foreigners love it too.

Although the city is known for its ghats, temples and music, there are many other famous places in Varanasi that must be seen and experienced on your trip.

A dip in the Ganga here is supposed to cleanse one of all their sins of omission and commission, even in their past lives. This holiest of cities is always bustling with the millions of visitors who come out of faith or mere curiosity. Let us discuss the top things to do in Varanasi.

SARNATH — located 13 km northeast of Varanasi, Sarnath is among the famous Buddhist pilgrimages in India. It is a popular place to visit around Varanasi for those seeking peace and solitude after jostling their way through the frazzled ghats and gullies of Kashi. After achieving enlightenment at Bodhgaya, the Buddha came to Sarnath seeking his former companions and thus gave his first sermon here.

Popular sightseeing places in Sarnath include the Dhamekh Stupa & Monastery Ruins, the Archaeological Museum, the Chaukhandi Stupa, the Ashoka Pillar, the Mulagandha Kuti Vihar, and the Chinese & Thai Temple and Monastery.

GANGA AARTI — Ganga’s purification powers influence the Hindu belief system, ascribing a Godly status to the river. Claim your place early at the Dashashwamedh Ghat or get close on a boat. See the cleaning of the brass lamps in preparation for the Aarti, a Hindu custom of lighting a lamp in worship, to the river. This 45-minute ceremony happens every evening amidst Vedic chants and the prayers of all the pilgrims. An unforgettable experience and one of the best things to do, you’ll agree.

DEER PARK — the deer park at Varanasi is at the place where Buddha taught his first sermon and proclaimed his Dharma and created the original Sangha; all of which are held especially sacred by Buddhists. This deer park was first established by a Jataka King of Varanasi in 528 BC, according to the Chinese Monk Huien Tsang. This heavenly park has deer roaming it freely and a huge variety of birds.

MALVIYA BRIDGE — this double decker bridge was inaugurated in 1887 and is one of the major bridges across the river Ganges in Varanasi. Carrying rail track on its lower deck and a road which carries India’s Grand Trunk Road across the river, this bridge stretches 1048 meters and was originally called the Dufferin Bridge, to be re-named in 1948. Enjoying the panoramic views of the river and the city from here is among the top things to do.

CHUNAR FORT — the Chunar Fort (also known as Chandrakanta Chunargarh and Charanadri) is located in Mirzapur district of Uttar Pradesh, in India. Along with Chunar town, situated below the fort, the two are historic places with common history and legends. It is located 23 kilometres (14 mi) south west of Varanasi. The southeastern part of the fort is on the rocky bank of the Ganges River. The fort’s history spans from 56 BC and then between Afghan decedent Sher Shah Suri’s (1532) rule, the Mughal Empire rule (Humayun, Akbar and many others including Nawab of Awadh) up to 1772, and finally the British Raj up to 1947 till India gained independence. Chunar railway station is on the Mughalsarai-Kanpur section of Howrah-Delhi main line. The fort later came under the control of Sher Shah, Humayun, Akbar and the British East India Company.

GODOWLIA MARKET — the biggest and the busiest market in town, Godowlia is among the popular tourist places in Varanasi. Godowlia Market is the oldest and most loved market for its variety of goods and its privilege to offer wholesale to retail goods. The archaic and dilapidated buildings posing a threat to innovation are the recognition of the market. The market is nearly 3kms from Varanasi Cantt Railway Station and could be reached within 10 minutes by rickshaw. Godowlia Market is Located in Maheshpur, Godowlia is the Central Business District (CBD) of Varanasi. It sells everything from daily household items to glass bangles and trinkets. The smell of camphor that wafts out of every second shop in this market will surely get you drunk on the divine. So, make sure you do not skip this place at all.

GANGES RIVER — the holy Ganges River supplies Varanasi with a spiritual charm with Rowing boat rides during the dawn is perhaps one of the best things to do in Varanasi. The ride along Ganges River is few of the experiences of Varanasi you shall cherish for a lifetime. It takes one through different Ghats and former palaces situated close to the banks of Ganges, giving a panoramic view of this River and the region. The waters of Ganges River are sacred. The divine river offers salvation to everyone who bathes in the water. Pilgrims from all over in the world no matter their age take a dip in the water to absolve their sins and attain moksha, liberation from the cycle of birth and death. Bathing happens here seen since the crack of dawn. People chant prayers to appease the River Goddess.

DASHASHWAMEDH GHAT — Varanasi has more than 84 Ghats with stairs leading to the waters. Dashashwamedh Ghat, associated with two Hindu mythologies is one of the best places to explore. The Dashashwamedh Ghat along the River Ganga in Varanasi is the most charming sight in the holy city. Some of the other major Ghats include the Assi Ghat, Mata Anandamai Ghat, Manikarnika Ghat, Munshi Ghat, Raj Ghat, Scindia Ghat, etc. Tulsi Ghat is believed to make people get rid of leprosy and is highly revered by all. Strolling along the Ghats at sunset hours is an unrivalled experience. Exploring the Ghats is one of the best things to do in Varanasi. These are bathing Ghats, praying Ghats and cremation sites for Hindus from all over the world.

A dip in the Ganga here is supposed to cleanse one of all their sins of omission and commission, even in their past lives. This holiest of cities is always bustling with millions of visitors who come out of faith or mere curiosity. Let us discuss the top things to do in Varanasi

ALAMGIR MOSQUE — the Alamgir Mosque was built in the 17th century by Aurangzeb over the ruins of a Hindu temple. The mosque is located at a prominent site above the Panchganga Ghat, which is a funerary ghat facing the Ganges. The mosque has high domes and minarets. Two of its minarets had been damaged; one minaret crashed killing a few people and the other minaret was officially brought down because of stability concerns. Non-Muslims are not allowed to enter the mosque. The mosque has a security cordon of a police force. The mosque is architecturally a blend of Islamic and Hindu architecture, particularly because of the lower part of the walls of the mosque having been built fully with the remains of the Hindu temple.

RAMNAGAR FORT — the Ramnagar Fort, located near the Ganges on its eastern bank and opposite the Tulsi Ghat, was built in the 18th century by Kashi Naresh Raja Balwant Singh with cream-coloured chunar sandstone. The fort is a typical example of the Mughal architecture with carved balconies, open courtyards, and scenic pavilions. At present, the fort is in disrepair. The fort and its museum are the repository of the history of the kings of Benares. Cited as an “eccentric” museum, it contains a rare collection of American vintage cars, bejewelled sedan chairs, an impressive weaponry hall, and a rare astrological clock. In addition, manuscripts, especially religious writings, are housed in the Saraswati Bhawan which is a part of a museum within the fort. Many books illustrated in the Mughal miniature style are also part of the collections. Because of its scenic location on the banks of the Ganges, it is frequently used as an outdoor shooting location for films.

DURGA MANDIR — Durga Mandir also known as Durga Kund Mandir and Durga Temple, is one of the most famous temples in the holy city of Varanasi. This temple has great religious importance in Hinduism and is dedicated to the Maa Durga. Durga Mandir was constructed in 18th century by Bengali Maharani (Bengali Queen). The temple was built in North Indian Nagara style of architecture. The temple is painted red with ochre to match the colours of the central icon of Durga, the goddess of strength and power. Inside the temple, lots of elaborately carved and engraved stones can be found. Durga Mandir is the best place for visitors to amuse themselves with the culture of Hindus.

BANARAS HINDU UNIVERSITY — established in 1916, BHU was the first university established by the nationalist leaders. Mahatma Gandhi delivered his first public address on the occasion of its inauguration. BHU is located on the southern edge of Varanasi, near the banks of the river Ganges. Development of the main campus, spread over 1,300 acres (5.3 km2).The campus layout approximates a semicircle, with intersecting roads laid out along the radii or in arcs. Buildings built in the first half of the 20th century are fine examples of Indo-Gothic architecture.

The campus has over 60 hostels offering residential accommodation for over 12,000 students. On-campus housing is also available to a majority of the full-time faculty.

The main entrance gate and boundary wall was built on the donation made by Maharaja of Balrampur, Maharaja Pateshvari Prashad Singh.

Just So You Know

Varanasi lies along National Highway 2, which connects it to Kolkata, Kanpur, Agra, and Delhi, and is served by Varanasi Junction railway station and Lal Bahadur Shastri International Airport.

Silk weaving is the dominant industry in Varanasi. Muslims are the influential community in this industry with nearly half a million of them working as weavers, dyers, sari finishers, and salespersons.

Art and literature-Varanasi has old culture of fine art and literature. In Varanasi the art lovers and historians such as Rai Krishnadasa, musician Gopal Mishra and numerous others who have kept this city alive to the spiritual aspects of fine arts. People celebrate their numerous festivals in traditional styles of classical and folk culture of Varanasi.

Museums in Varanasi-Varanasi also has great museums the Jantar Mantar, the Archaeological museum, the Bharat Kala Bhavan, and the Ramnagar Fort. These museums are the best places for visitors to get know about the culture of Varanasi.

CANTON ROYALE RESTAURANT — it is one of Varanasi’s best top-end choices, offering a great-value, global hodgepodge, from Mexican and Thai to Chinese and Continental. But really, it’s the Indian that’s excellent, including a wonderful thali.

The writer is a student of City & Regional Planning Department at University of Engineering & Technology, Lahore. She can be reached at afshanmughal120@gmail.com