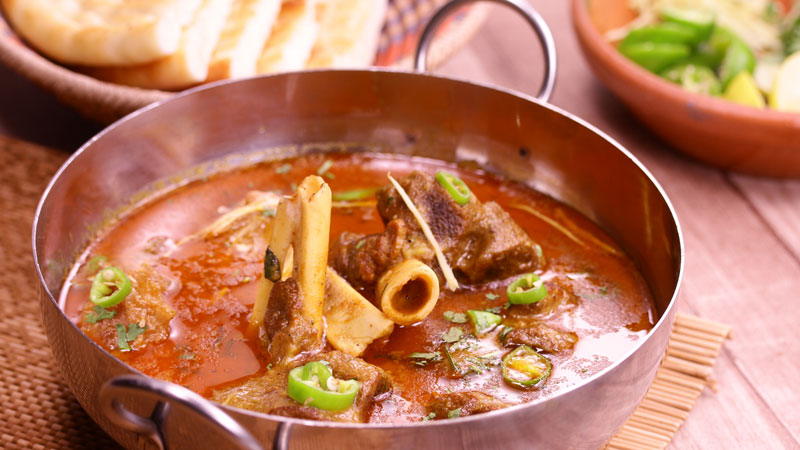 Pakistan is a country where people love their food and dining out is their favourite hobby. Recently, famed vloggers who visited Pakistan for the promotion of tourism also admired the culinary of Pakistan. Pakistani dishes are famous for their aromatic and spicy flavours.

In Pakistan, food also has the influence of large number of families who after independence migrated to Pakistan from Delhi, Lucknow and some other areas of India.

In the last 20 years, many international food chains have opened their outlets in Pakistan. The presence of these food chains have given a lot of options to the people of Pakistan but even their presence failed to dent the love and passion people have for desi food.

As a fan of local food, I am elaborating on the most loved desi food menu of Pakistan.

NIHARI – beef shank (Bong), a special kind of cow’ meat is used for making Nihari. Today Nihari is available at every corner of Pakistan for lunch and dinner. As Nihari has its roots in Delhi, and majority of families who migrated from Delhi have settled in Karachi, that’s why this dish has strong roots in Karachi. Once upon a time, Nihari was only available at specialized outlets in the old area of Karachi and that too in breakfast. In early 60s till late in the decades of 1970s, people used to purchase Nihari in the morning. At the few Nihari shops located in and around Burns Road, the famous and oldest food street of Karachi, a queue of pots was made at the shops selling Nihari. A designated person used to pour nihari out from the big underground cauldron and fill all the pots in a sequence. The cauldron of nihari is unique as more than 50% of the cauldron is underground and a slow stove is always burning under it to keep the broth hot. Cow’s or goats brain is the additional item bought with Nihari to enhance the flavour. Green chillies, ginger and mint leaves are used for garnishing. Although many new outlets are selling nihari in Karachi but still few outlets of past decades are operating in the city. Idrees Nihari shop is one such shop. This shop is operating in Bhora Pir area of Karachi since 1965. A person named Idrees having a family recipe of preparing Nihari opened this shop and today his grandson is continuing the family business. A few other old days’ shops are Malik Nihari at Burns Road, Sabri Nihari and Zahid Nihari. In Karachi’s area known as Dastagir, Javed Nihari is also running for last more than 30 years and today it is regarded as one of the best Niharis of the city. Nihari is liked by people of all ages and social strata and it is expected to rule the nation’s taste buds for decades to come. 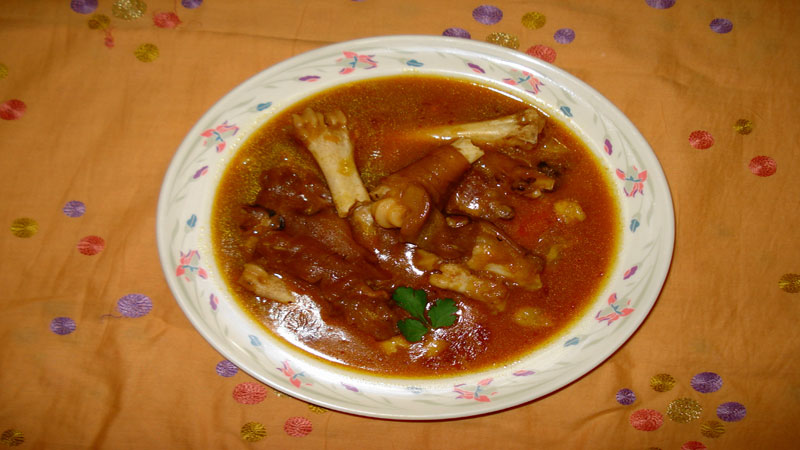 SIRI PAYE – trotters commonly known as Paye is another favourite dish of desi food lovers. Paye of cow and goat are equally loved by people. Trotters cooked with Siri (cheeks tongue) are consumed as breakfast in the city of Lahore and other adjoining areas. In the walled city of Lahore, food lovers after enjoying their plate of Sirri Paye also consume a glass of lassi. Fazal Haq aka Phajja, an outlet in Lahore is the famous Sirri Paye selling shop of Lahore. People rush early morning to eat their Sirri Paye. The consumption of Sirri Paye increases in Winter. In Karachi, people prefer homemade Sirri Paye. My mother used to make cow trotters. She worked hard to wash them and after putting the trotters in big cauldron along with all the spices, she let them cook on low heat for whole night. An interesting fact about cooking Paye is that it is a rare dish in which yogurt or tomatoes are not used for cooking.

KATA KAAT (TAKA TAK) – this is another beloved dish in Pakistan. It is called Kata Kat in Karachi but in Lahore and other parts of country it is known as Taka Tak. Kata kat is prepared using the internal organs of goats. Kidney, liver, heart and brain are the parts used for making this dish. In some places, Kata kat makers also include chops in this combination to enhance the flavour further. Kata Kat fans also do some fusion in this dish like some people only eat brain or some eat Kata Kat made with liver and kidney. Cooking time for Kata Kat is 20-25 minutes.

BIRYANI – in my view, a food related discussion without mentioning Biryani is incomplete. People of Pakistan love Biryani so much that some people think it as Pakistan’s national food. Biryani has various variants that are Zafrani Biryani, Spicy Biryani, Sindhi Biryani, Awadhi biryani, Hyderabadi Biryani and others.

Biryani is the integral part of food served at all functions be it a birthday party, marriage function or any other family get together. Today we have many outlets serving biryani in the country but few decades ago, readymade biryani was not easily available and people have to place order to various Pakwan houses to get biryani.

The first readymade biryani centre was set up by Haji Muhammad Ali in 1969 in Karachi’s Saddar area. He named it Student Biryani to garner attention of students coming out of their schools and colleges in the evening. Haji Muhammad Ali set up a cauldron of his homemade biryani on a push cart in the early days of his business. With time, Student Biryani became the household name and today they are also serving biryani internationally. It is unfortunate, that the quality of Student Biryani has gone down but reality is that they will always remain the pioneers of cooking and selling readymade biryani.

HALEEM – Haleem is prepared by mixing pulses and various spices with meat and cooking it. Later on once the broth is cooked, people do its ghutai that is done using a big round wooden spoon to crush all the pulses. Ghutai of haleem is more difficult than its actual cooking and Haleem’s taste enhances if ghuatai is done well. Haleem is somehow linked with the month of Muharram. During the processions of 9th & 10th Muharram and also during other days of Muharram, people prepare Haleem and not only eat themselves but also distribute it among friends, family members and acquaintances.

Haleem is eaten with spoon but some people prefer to eat it with Naan and the food outlets famous for preparing Haleem offer special discount during the month of Muharram.

Food in Pakistan is not restricted to these items only but I highlighted these dishes with a view that these evergreen cuisines are ruling the nation’s taste buds for decades and will continue to do the same in the years to come.