MIANWALI/MULTAN-Nine members of a family died on Monday morning when an LPG cylinder exploded in an ambulance after it collided with a trailer on Multan-Mianwali Road. 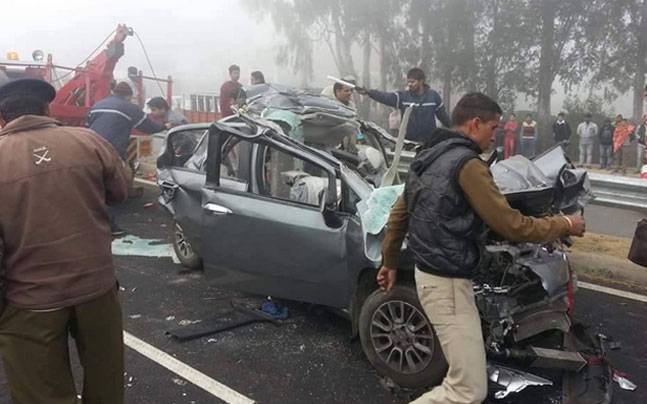 According to police and rescue sources, an ambulance carrying a patient and its family members to Rawalpindi was collided with a trailer near Head Pakka on Multan Road as a result gas exploded in it and it caught fire.

Resultantly all the nine persons in the vehicle dead including two children and four women, rescue officials confirmed.

The rescuers informed that the gas cylinder in the ambulance exploded due to the collision and a fire engulfed the vehicle, which caused the deaths including the driver and the patient.

The dead bodies were transferred to the DHQ Hospital Mianwali, rescue sources said.

The fire gutted the ambulance and burnt the dead bodies beyond recognition as only ambulance driver was identified through his clothes.

The relatives of deceased have reached hospital to take back the bodies after completion of formalities.

The gruesome accident occurred in the jurisdiction of Kandia Police.

The police have registered a case and started further investigation.

According to police and rescuers, a passenger bus overturned near a village called Attar Bhakar in the limits of Saddr police in Jacobabad while two women and child died on the spot. The police after reaching the accident spot transferred the bodies to the hospital.

According to the police the accident took place as a tyre of the bus burst apart.

In Multan, a car was collided with a truck resulted in the death of two persons. Rescue team reached the spot and shifted dead bodies to the hospital after cutting the vehicle. The district officer rescue 1122 said that only two persons were travelling in the vehicle.