Clashes amid efforts for Kurd pullout from Syria border town

AKCAKALE/TURKEY: Kurdish-led fighters and Turkish-backed forces clashed sporadically on Sunday in northeastern Syria amid efforts to work out a Kurdish evacuation from a besieged border town, the first pull-back under the terms of a US-brokered cease-fire. Turkey said one of its soldiers was killed in the day’s violence. 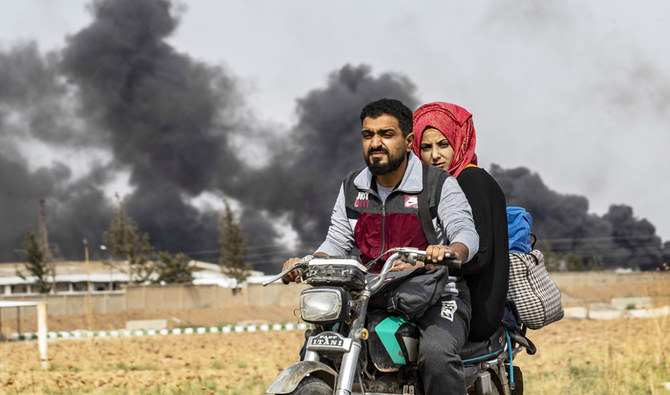 The planned evacuation of Kurdish fighters and civilians from the town of Ras Al-Ain would open the way to a pullout of the fighters from a broader swathe of territory along the border, a senior official in the Kurdish-led forces told the Associated Press.

The official, Redur Khalil, said on Saturday evening that the evacuation could take place on Sunday if there were no new problems.

Turkey’s Defense Ministry said the soldier was killed in a Kurdish attack with anti-tank weapons and small arms fire near the border town of Tal Abyad.

That brought the Turkish military’s death toll to seven soldiers since it launched its offensive against Kurdish-led fighters in northeast Syria on Oct. 9.

Erdogan is meeting Russian President Vladimir Putin in the Russian town of Sochi on Tuesday where he will tell Putin that Ankara does not want either Syrian forces or Kurdish fighters along the border.

The Kurdish-led Syrian Democratic Forces (SDF) said Turkish troops and their allied Syrian fighters have continued their offensives the past 24 hours, forcing its fighters to retaliation.

Meanwhile Turkish President Recep Tayip Erdogan is meeting Russian President Vladimir Putin in the Russian town of Sochi on Tuesday. His spokesman Kalin said he will tell Putin that Ankara does not want either Syrian forces or Kurdish fighters along the border because refugees would not go back to areas under their control.

“We want to create conditions that will be suitable for them to return where they will feel safe.”