* Alankara, also referred to as palta or alankaram, is a concept in subcontinent's classical music which literally means ornament or decoration 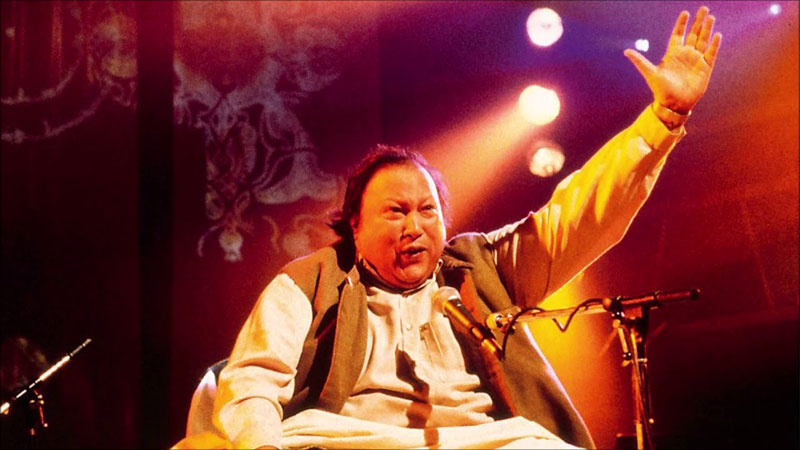 Late vocalist and musician Nusrat Fateh Ali Khan was born on October 13, 1948. His popularity skyrocketed sky high in the 1990s. By then he was an established musician acknowledged and admired globally. He still is a favourite singer of many of his fans. His travels to India, Europe, USA and Japan had developed huge fan following due to his innovations in the traditional Qawwali rendering as inherited from his father and Uncle Ustad Fateh Ali Khan-Ustad Mubarak Ali Khan duo. On the top of the list is his Qawwali ‘Dum Mast Qalandar Must Must’. He had introduced Sargam/Paltas in his rendering. Before proceeding further, let us elaborate the meanings of these terms. Subcontinent’s classical music has seven basic notes called surs (notes). We commonly come across them in their shortened forms as Sa, Re, Ga, Ma, Pa, Dha, and Ni. Sa is the root/base note and the reference point based on which an octave is defined.

Alankara, also referred to as palta or alankaram, is a concept in subcontinent’s classical music and literally means ornament or decoration. The amazing contribution of Ustad Nusrat to music connoisseurs was that a young man from Faisalabad had amalgamated this difficult craft in his renderings of all forms of music he composed to add flavour to his presentations.

The Westerners were mad about the qawwali beat and danced to tabla rhythm. They were in trance of his singing even if they did not understand Urdu/Punjabi lyrics.

One of his achievements was that he served as a Visiting Artist in the Ethnomusicology department at the University of Washington, Seattle, in 1992-93. Over the span of his career, he released many albums and worked on the soundtracks of numerous films on an international level. He worked with Canadian musician Michael Brook on the albums ‘Mustt Mustt’ (1990) and ‘Night Song’ (1996).

Not going through the background of Ustad Nusrat’s training and art of Qawwali rendering, I would rather dwell on his contributions to Cinema. Nusrat Fateh Ali Khan sang for, and performed in several Pakistani and Indian films. Some of the songs he sang for Indian films include ‘Koi Jane Koi Na Jane’, ‘Saya Bhi Saath Jab Chhor Jaye’, and ‘Dulhe Ka Sehra’. He also contributed the song ‘Gurus of Peace’ to the Indian album ‘Vande Mataram’ which was released to celebrate the fiftieth anniversary of India’s independence. That was the time when India had not banned Pakistani artists performing in India on Stage and in films unlike the hate developed by today’s fascist regime and banning artists to travel to India. As a matter of fact, Pakistani visiting artists had overshadowed Indian singers by their powerful performances.

I have written in my book Melody Makers 2 (under publication) that Nusrat Fateh Ali Khan became popular among Indian filmgoers through a copying of one of his many masterful renditions by Viju Shah. It was a dance number Tu Cheez Bari Hai Must Must from the blockbuster Mohra (1994). Nusrat’s catchy tune was lifted but the spiritual lyrics were replaced by commercial lyrics Dum Must Qalandar Must Must. The treatment was a fallacy. Instead of a group of seated Qawaals willing themselves into a state of trance, one got grinding waists and swinging hips. The Indian cinema fans felt jittery about this treatment. The fact of the matter is that Nusrat was first introduced by music composer Khayyam about thirteen years before the release of the movie Mohra in 1994. It was in the film Nakhuda that did not do well on the box office. So, this introduction went unnoticed. It was through the track ‘Haq Haq Ali’ in this Dilip Naik’s movie about the inter-faith relationship between a young man and his mentor. Nusrat rendered the Qawwali along with his relative, Mujahad Ali, and he was credited as Nusrat Ali on the soundtrack. It is reported that even before Nakhuda, Nusrat Fateh Ali Khan had already performed in India, at the music ceremony on the wedding of Rishi Kapoor and Neetu Singh on January 20, 1980. Rishi Kapoor tweeted out the information in response to a fan’s post of a photograph of the occasion. Nakhuda came the following year, but it took Viju Shah’s grand theft for the great singer to get the stature he deserved in India.

The Westerners were mad about the qawwali beat and danced to tabla rhythm. They were in trance of his singing even if they did not understand Urdu/Punjabi lyrics

Shortly before his death, he composed music for three Bollywood films, which includes the film Aur Pyaar Ho Gaya, in which he also sang for “Koi Jaane Koi Na Jaane” onscreen with the lead pair, and “Zindagi Jhoom Kar”. He also composed music for the film Kartoos, where he sang “Ishq Da Rutba” and “Bahaa Na Aansoo”, alongside Udit Narayan. He died very shortly prior to the movie’s release. His final music composition for Bollywood was for the movie, Kachche Dhaage, where he sang the song, “Iss Shaan-e-Karam Ka Kya Kehna”. The movie was released in 1999, two years after his death. It is notable that the two legendary singing sisters of Bollywood, Asha Bhosle and Lata Mangeshkar sang his composed songs during his brief stint in Bollywood. He sang “Saya Bhi Saath Jab Chhor Jaye” for Sunny Deol’s movie Dillagi. The song was released in 1999, two years after Nusrat Fateh Ali Khan’s death. He also sang “Dulhe Ka Sehra” from the Bollywood movie Dharkan which was released in 2000. Composer AR Rahman, who was a big fan of Khan as a tribute, later released an album titled Gurus of Peace, which featured “Allah Hoo” by Khan. Rahman’s 2007 song “Tere Bina” was also composed as a tribute to Khan

Some of his Nusrat Fateh Ali Khan’s most popular albums are ‘Mustt Mustt’, ‘The Day, The Night, The Dawn, The Dusk’, ‘Night Song’, and ‘Sangam’. His fan following has not diminished despite that he left this temporary abode for the Almighty in London, UK on August 16, 1997, twenty two years ago. He was on way to Los Angeles for kidney transplant. He was just 48 years old then. His siblings comprise his brother Farrukh Fateh Ali Khan, wife Naheed Nusrat the daughter of his uncle, Salamat Ali Khan (married in 1979), a daughter Nida.

Khan’s musical legacy is now carried forward by his nephew, Rahat Fateh Ali Khan son of Farrukh Fateh Ali Khan, popularly known as Farkhi. His wife, Naheed Nusrat, died on 13 September 2013 in Credit Valley Hospital in Mississauga, Ontario, Canada. Naheed had moved to Canada after the death of her husband.

Nusrat Fateh Ali Khan shall remain alive for time to come because of his music.