Facilitation centre Muzaffargarh: a role model for other districts 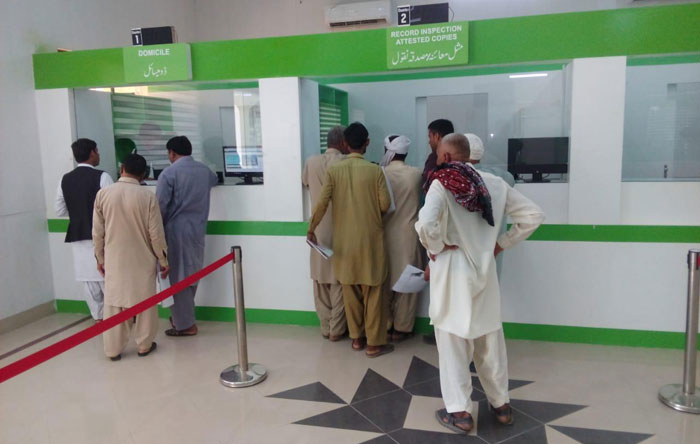 Muzaffargarh that lies between river Chenab and Indus is a rural district with a population of 4.3 million, long needed many civic facilities after it has been badly hit due to floods in 2010. To put the citizens of government at ease, Punjab Youth Workforce Development Project’s and USAID established One Window Facilitation centre in the premises of Muzaffargarh Deputy Commissioner’s office.

All the civic services are being provided under one-roof at this facilitation center. This is the first ever facilitation centre of its kind in any of the 36 districts of Punjab. This centre is the replacement and integration of four governmental services, including issuance of domicile certificate, armed license, route permit, and record copying under one roof, easing Citizens vs. Governmental interphase. All the facilities provided by the district government has come under one roof. However, system of NADRA has yet not been aligned in the said project. There is only one delivery counter where people can collect their required documents on given timelines. The Incharge/Manager’s room is also established, where he/she will ensure the smooth functioning of the centre. Thus, the people of Muzaffargarh can benefit of this multifunctional service and get their said certificate/documents efficiently, timely and in comfortable environment.

Prior to the establishment of this facilitation centre, there were several departments which were authorized to provide each of these facilities individually and citizens following a laborious process have to make rounds of each office on daily basis.

The facilitation centre that was inaugurated by Counsel General USAID Colleen in May 2019 has been providing multifunctional services efficiently in the minimum possible time in a very comfortable environment. At the time of inauguration, an MoU signing took place at the Facilitation Centre between USAID’s PYWD Project and the district government Muzaffargarh for formal handing over of the Facilitation Centre to the District Government, Muzaffargarh.

Qaisar Nadeem, Chief of Party, Punjab Youth Workforce Development (PYWD) said that the facilitation is a role model for the government. This program can be adopted in other districts of Punjab to facilitate the masses. He said that government should work on this policy lines and benefit from its design and working for expansion in other districts of Punjab. He said that if such programs would be initiated at macro level such as with the use of solar panels, its cost would be reduced.

Dr. Ehtesham Anwar, DC Muzaffargarh while talking to Express Tribune said that district government Muzaffargarh has shared this idea with Chief Minister Punjab. We have discussed that with the minimum finances and public private partnership it can be expanded in all over Punjab. DC Muzaffargarh said that he himself being an alumni Hubert Humphery and a beneficiary of USEFP programme, he had witnessed such facilitation centres in the US and such initiatives would be very helpful in Pakistan. He says the USAID did not take time to approve this project which has had embedded benefits for the local.

The model, he says, has been highly appreciated at the government level and considerations are underway the Punjab government will replicate it in other parts of the province. DC said that office of the district government should remain open for the general public so that people can easily approach the government. He said that with this program, people would not have to go out of district for their works as it keeps the citizens at ease and provides 10-12 facilities including acquisition of birth certificate domicile etc under one roof. If it is successful in a small rural district like Muzaffargarh where there is illiteracy and terrain lands, it will be beneficial in other districts also, he added. This program in other districts can save people from the unnecessary hassles and interaction with Deputy Commissioner’s office staff as well as the agents’ media operating there, he added.

Former MNA Jamshed Dasti has said that the facilitation centre is a blessing for the people of Muzaffargarh which has been badly hit due to floods in the past 10 years. He said that citizens don’t have to move from one office to another, they can now put all requests and complaints at one office and can check the status of their applications and complaints by calling on helpline. He said that all the information available at district government is just a call away now.

Civil Society Activist Advocate Esa Ghazi has said that government can initiate this venture with the minimum possible time and budget. It would be more effective if NADRA-related facilities would also be included in such facilitation centres.