* His dancing style of entering the arena with loose arm movement, taking a round and then clasping his hands with finger tips became his logo 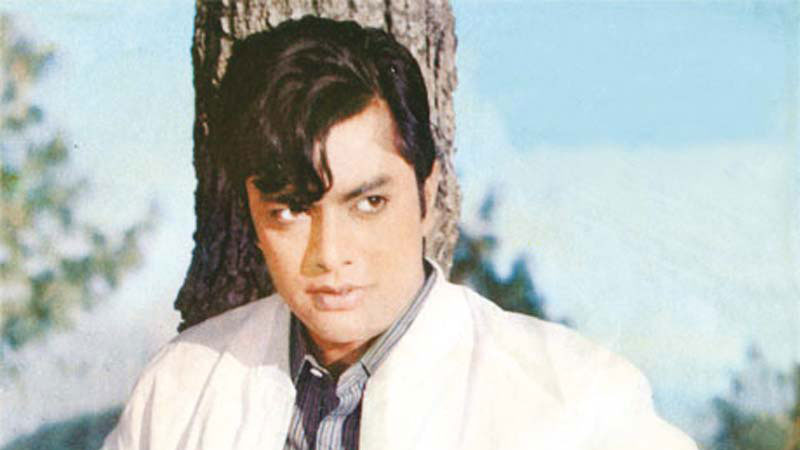 Late actor and producer Waheed Murad was born on October 2, 1938 in Karachi, Pakistan.

He was the famous, actor, producer, director and writer of Pakistani films. Due to his looks and naughtiness on silver screen, he was often referred to as chocolate hero. His smart looks and soft dialogue delivery made him stand out from his contemporaries.

His dancing style of entering the arena with loose arm movement, taking a circle and then clasping his hands with finger tips became his logo. One can watch ‘Three Cheers for Bhabi Hip Hip Hurray’ from the movie ‘Dever Bhabi’ sung by Ahmad Rushdi and other songs filmed on him.

Directed by AL Hamid, this film starred Darpan, Neelo, Husna and Talish. It was a silver jubilee venture. Director SM Yousuf, upon his migration to Pakistan made a film ‘Aulad’ in 1962. Waheed Murad bagged a supporting role in this film. He produced a film ‘Heera Aur Pathar’ in 1964, in which he appeared in a leading role for the first time. The myth goes that initially Darpan was cast in this movie but due to his habit of coming late at the sets, he was dropped. Zeba, the leading heroine and director Parvez Malik advised Waheed Murad to take over as actor. Parvez’s only condition to Zeba was that she would accept to be heroine opposite Waheed Murad in this film. She heartedly agreed. Waheed bagged Nigar Award for this film and the film ran for silver jubilee weeks. He became the leading figure of film industry after a series of commercially successful films during 1964 to 1971. His naughty facial gestures, romanticism and alluring performance style during the filming of the songs made him popular.

Waheed Murad did some flop movies for next three to four years namely ‘Mamta’ in 1964, ‘Saaz Aur Awaz’ in 1865 with Rani, Habib, Ragini and Talish. This was Waheed’s first film opposite Rani. In 1965 too Waheed acted in the film ‘Doctor’ with Bahar, Yasmin, Jafri and Najamul Hassan directed by Shaukat Hashmi. S. M. Yousuf produced a film ‘Honhaar’ with Waheed Murad, Rukhsana, Shakeel, Taranum and Kamal Irani. The success awaited Waheed Murad in the film ‘Armaan’ in 1966.

Wikipedia states “Waheed Murad produced eleven films under his father’s established ‘Film Art’ Production. He was the youngest film producer in the industry at that time. As producer, Waheed Murad was a successful producer. Most of his produced films were either Golden Jubilee or Silver Jubilee films. During the 1960s and early 1970s, he produced films like ‘Insaan Badalta Hai’ (1961) (his first film as producer), Armaan (1966), Ehsaan (1967), Naseeb Apna Apna (1970) and Mastana Mahi (Punjabi film of 1971). However, after ‘Mastana Mahi’ he produced no film except ‘Hero’ which was produced in the 1980s and was released after his death. As director, he had directed as well as produced ‘Ishaara’ (1969) with co-star Deeba. But the film failed to achieve the viewers’ expectations”.

Wikipedia gives the storyline of this Waheed Murad produced and Parvez Malik’s directed film “The film tells of a beautiful but underprivileged girl Najma (Zeba) living in Murree with her aunt (Bibbo) and her two daughters Dolly and Seema. One Morning she is told to escort Seema home as she has returned from a trip. When she arrives, a tearful Seema tells her of an affair she had with a man called Sohail. As a result of the affair she had become pregnant; however she abstained from telling Sohail as he had finally found the job of his dreams and was going away to work. So she had the baby, hid the child from the world and awaited Sohail’s return. But he never came. She entrusts Najma with the responsibility of taking care of the child and keeping her secret. Najma agrees and takes her home, and she leaves the baby with an old peasant in the hills for safekeeping.

Meanwhile, in Karachi, the son of Seth Khan Bahadur (Zahoor Ahmed), Nasir (Waheed Murad), leads a privileged life and is habitual of going to nightclubs and various parties with his friend Shahid (Nirala). One day, after coming home late from a night club, his father catches him red handed and proceeds to scold him. After this he tells Nasir that his late friend’s wife has sent a letter to him proposing marriage for one of her two daughters and Nasir is to leave the next day for Murree. Nasir is reluctant but has no choice so he agrees, however he is given the choice to choose between the two daughters. Nasir takes his friend Shahid along and on the way switches roles with him, thereby exempting himself from marriage.

Upon reaching their destination Shahid and Nasir become acquainted with the family and Shahid, acting as Nasir, immediately takes a liking to Dolly. Nasir(acting as Shahid), however, takes a liking to Najma and the two fall in love.

After a while the Shahid and Nasir are told that Seth Khan Bahadur has been invited to Murree to finalize the marriage. Nasir, the real Nasir, comes to the house disguised as his father and successfully fools everyone. However, his real father arrives and exposes the whole truth.

After his father has told him off, Nasir tells him of Najma and how the two are in love and she is the perfect person to take as a wife rather than Dolly or Seema. His father, seeing how serious he is, joyfully agrees. However, when his father talks to Najma’s aunt, she reacts strangely and says that Najma is not the innocent girl she seems to be. She then calls the old peasant, who Najma left Seema’s baby with, into the room carrying Seema’s baby. Najma’s aunt asks her to put the baby in his mother’s arms. She then puts the baby in Najma’s arms, and Najma, bound by her promise to Seema, says nothing. Nasir is shocked by this ill news and refuses to accept it. He desperately tries to persuade Najma to deny the accusation. Najma, sworn to secrecy tells Nasir to forget her. Nasir is crushed and leaves in anger.

Nasir, returned to Karachi, is overcome with depression and resorts to drinking to forget his sadness. His father worries for him and asks him to marry Seema. In Murree, Seema says no to the marriage but is forced into it by her mother. She ventures to find Najma, who now lives with the old peasant and her nephew. She asks Najma to break her promise, but Najma stands by it and tells her to marry Nasir as it is for the best. Finally Seema agrees.

Meanwhile, in Murree, the nephew of the old peasant tries to force Najma to marry him and in the struggle she apparently kills him. Then she runs away to Karachi with the baby and arrives at Nasir’s house.

Nasir is infuriated at her arrival and is repulsed because she brought the baby as well. Seema however persuades Nasir to give Najma shelter in their house. This allows her to be close to her baby as well.

Meanwhile, Seema’s long gone lover, Sohail returns only to find her married to Nasir. He tries to meet with her but Najma stops him just in time and pleads to him to go back, but doesn’t tell him what has happened as she is bound by her promise. Nasir thinks that Sohail is Najma’s lover when he sees them talking and falls into another misunderstanding.

Sohail however, keeps writing letters to Seema which the household servant gladly takes to Seema every time, hiding them from Nasir. One day however, he is caught red handed. But Nasir is unaware that the letters were meant for Seema and not Najma. He confronts Sohail at his house and questions his relationship with Najma. When Sohail reveals the truth, he is awe struck.

He confronts Najma and asks her what gave her the right to toy with his emotions and weave this web of lies. He also reveals to Seema’s mother who has arrived that Najma had hidden the truth all along and the baby is Seema’s. This way she kept away shame from their household. Seema’s mother expresses her gratitude to Najma, but tells her to leave because in her midst they would always live in shame. Najma, now dejected by Nasir and completely helpless accepts this.

When she leaves, she is found by the old peasants’ nephew who hadn’t died after all. Their chase proceeds to a railway track above a river and both of them fall over. When this news reaches Nasir he is devastated. Meanwhile, amidst all the depression, Seema takes poison and dies as well.

Nasir and his family, along with Shahid, travel to Murree where Nasir drowns in depression and becomes an alcoholic. He spends his time in the valleys of Murree where he hallucinates that Najma is present among the trees. One day when Shahid is out on a stroll he sees Najma on crutches, it turns out that the fall from the rail track didn’t kill her, but broke her legs. Shahid persuades her to come home with him and marry Nasir who is depressed all the time and also tells her about Seema’s death.

Both of them proceed to Nasir’s home, only to find him missing. His father and Seema’s mother welcome her with open arms, but tell her that Nasir has left the house without telling anyone and in his condition, he might do something desperate.

Najma rushes to find him trying to commit suicide on the cliffs. She sings to him and asks him to come back. Nasir sees her and the two embrace. In the climax scene, a beautiful song “Akele na jana” moves one. The brilliant soundtrack composed by Sohail Rana is also behind this film’s success. The soundtrack is perhaps the most memorable one and features the voices of Ahmed Rushdi, Mala, Nasima Shaheen and Khurshid Nurali. Sohail Rana won the prestigious Nigar Award for Best Music Composer in 1966 for composing the soundtrack and Ahmed Rushdi won the Nigar Award for Best Male Singer in 1966 for singing “Akele na jaana”. This song was also rendered by Mala. Waheed Murad was given two Nigar Awards, one as producer and the other as male lead. Mala also sang a sad song “Meri Qismet Bata” admirably well. Rushdi sang club song “Ko Ko Koreena”, “Bataab Ho Udher Tum” and “Jab Pyar May Dou Dil Milte Hain”.