How an art residency program is fueling the creative Saudi spirit 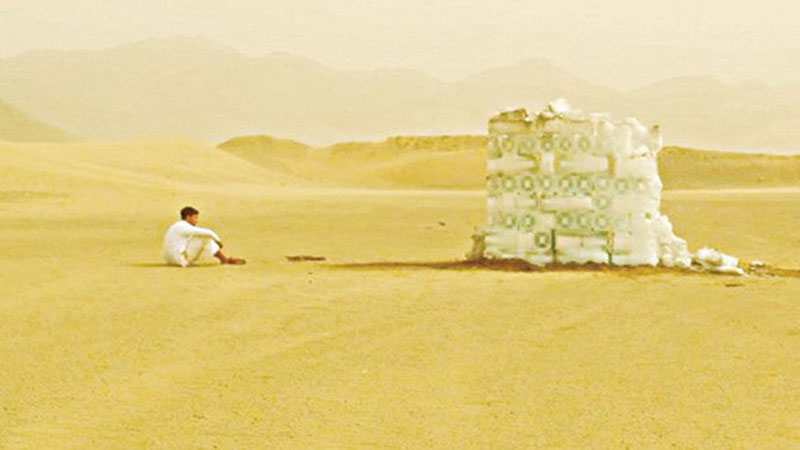 From New York to Paris and from Barcelona to Beirut, Saudi artists are being given a great opportunity to further their knowledge and experience, as well as explore new ideas. Jeddah’s Athr Gallery, a strong supporter of contemporary art, is sending established Saudi artists to cities around the world for inspiration and self-challenge.

The art-residency program, entitled “Out of Place,” began as an open invitation to all Saudi-based artists during Athr’s 10th-anniversary exhibition.

“The title refers to the notion of home and comfort zones, both of which get shaken when artists root themselves in a new city and environment for a residency program,” Alia Fattouh, director of Athr Gallery, told Arab News.

The program began in this autumn and will continue until winter next year. The residencies’ duration varies between three and six months.

The main goal of an art-residency program is to inspire and broaden the horizons of those taking part, by allowing them to experience art and culture in different contexts.

It allows artists to interact with curators, critics and other artists via workshops, seminars, discussions, exhibitions and collaborations. These experiences help artists develop their practice, approach, production, aesthetic and conceptual framework.

Being embedded in a fully developed art scene is critical to the success of a residency experience.

“By being based in these cities — Paris, Berlin, Beirut, New York and Barcelona — the artists have the opportunity to sit down with different art professionals, learn how to present their work and receive constructive feedback about their practice,” said Fattouh.

During the residency, artists and art practitioners are encouraged to visit as many museums and independent spaces as possible, and to be exposed to art in all its forms, be it performance, theater or public art.

Fattouh says the successful residency applicants were picked by a gallery committee based on their portfolio, the depth and originality of their work, the intellectual capital behind their practice, and the execution of an idea. Then they were selected by the residency house in each location.

Athr is keen to increase the number of residencies in order to enhance the local art scene and highlight home-grown talent. “We’re looking into making it an annual program,” Fattouh said. “Stay tuned.” Athr’s mission is to “foster a thriving creative art scene in Saudi Arabia and to nurture artists.”

“The gallery has acted as a bridge between Saudi Arabia and the rest of the world, and is behind the launch of many artists’ careers,” she said.

“So the residencies are only an extension of this work in creating international awareness of Saudi art and vice versa.” Ahaad Alamoudi, a 28-year-old Saudi artist, recently completed a two-month residency with Residency Unlimited in New York.

“It was amazing and added a lot to my experience. I learned a lot on many levels,” said Alamoudi, who is now back in Jeddah. The residency program, which ran between July and August, addressed participants’ needs and demands with its focus on network support, project production assistance and public exposure. “It was nice to be exposed to a new city, discover the art scene there, and meet different types of artists and curators who were part of the residency,” Alamoudi said.

“I had meetings scheduled with different people from the industry, including curators, artists and designers, and collaborated with one of the residents to produce a video artwork.”

She was able to exhibit three of her video works in the New Museum of Contemporary Art as part of a daily screening series. A longer video piece was exhibited in the museum’s weekly cinema event.

Alamoudi, who aims to alter the historical portrayal of the Kingdom through her work, considers the present time an exciting one for Saudi artists.

“There’s a lot of art emerging from Saudi Arabia, and many powerful artists are addressing important, sensitive topics intellectually,” she said.

The changing social landscape in Saudi Arabia is Alamoudi’s primary source of inspiration. In her four-hour video work “I was Told Ice Wouldn’t Melt in Heat,” she addressed the current changes in Saudi Arabia with a male performer who braves the harsh desert weather in a bid to prevent 250 blocks of ice from melting. By the time the video ends, the ice has melted completely. “In this piece, I’m trying to stretch the moment of change out and trying to make sense of it,” she said.

Alamoudi is optimistic about the youth-driven revival of art and culture in Saudi Arabia. “The emerging art scene is powerful, young and very strong. It’s surely the foundation for a stronger future,” she said.

The contemporary art movement in Saudi Arabia is the topic of a book entitled “Changing Saudi Arabia: Art, Culture, and Society in the Kingdom” by Sean Foley, a professor of history at Middle Tennessee State University.

Foley says such artists are “distinguished by their linkage of the ‘global with the local’ and the use of ‘domestic and international resources and opportunities’ to realize significant change at home.” Their ability to create art that is “recognizably Saudi while still adhering to global norms” is the unique characteristic of the Kingdom’s evolving art and culture scene.

This inclusivity and openness is leading to a higher level of cultural dialogue between Saudis themselves, and between the Kingdom and the rest of the world.

Moath Alofi, a prominent Saudi artist who is preparing to begin his three-month residency in Beirut, said Saudi Arabia is a “very good medium for creativity.”

He added that the Kingdom has the potential to be a regional cultural hub for young local and non-local artists to flourish and grow in their career paths in different forms of art.

The upcoming stint with Beirut Art Residency will be the second residency in Alofi’s career.

He intends to make it an educational journey, to pick up new skills and hone his artistic talent. “It’ll give me time to focus on my art,” Alofi said.

“Residency is a new idea in the Saudi art scene. It’s a great chance to learn more. The experience depends on what the artist’s aims are and what the residency’s orientation is.”

He has been an artist, explorer, and culture and heritage researcher for the past five years. His photographic and documentation works focus on urban, architectural, human and cultural transformations. Alofi is inspired by the wide and diverse geography, history and culture of Saudi Arabia.

“There’s so much to discover in this country,” he said.

Both inside and outside the Saudi artistic community, there is a common complaint that limited access to sound artistic education deprives the field of informed criticism. However, Alofi sees this as a blessing in disguise.

“We might have missed an essential part of the journey, which is artistic education, or critical artistic skills, on the personal and social levels. But this (gap) has created a unique genre, which is tough and highly experimental,” he said.