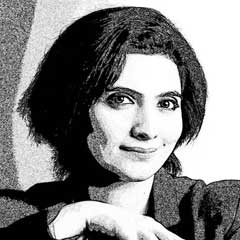 A society with more than half of its population under identity crisis, where women are raised with the mind-sets of getting ready to be someone’s plus one, can only progress as far enough as this thought. Such a mentality hints that a woman has no identity of herself, be it at home or at the state level. She is either represented as someone’s daughter, sister, mother or wife. Although all these are the roles she plays in her lifetime, but they become her identity in our society.

A surprising incident that recently occurred with my husband and I made us realize how inferior and dependent women are made to feel at all levels in the society, no matter how educated and self-dependent they may be. My husband and I had to get our marriage certificate attested by the foreign office, which had been attested two years back as well. For this purpose, they required our Computerised National Identity Cards (CNICs). On showing those, the objection we received was that the attestation cannot be processed until my CNIC has my husband’s name on it, as if I don’t have my own identity. As a matter of fact, the marriage certificate has CNIC details and is a proof itself. Also, both documents are given by National Database and Registration Authority (NADRA), so what possible difference would adding my husband’s name make to my identity that the attestation could not have been processed without it?

Why the need for females to have names of their spouses on their NICs when males are not subjected to the same absurd condition? Do adult women not possess their own identity as men? Aren’t we going back in time instead of progressing and abandoning such unnecessary conditions?

A female is born with equal rights as a male. Human rights are not subjected to gender, whichever it might be. This also includes transgenders, an often forgotten minority, barely taken into consideration when it comes to equality or human rights. Then why such disparity and discrimination between the genders? It’s surprising how the population of women exceeds that of men by a substantial number and yet how little importance, respect, and rights such an influential population is given, even to this date regardless of the educational progression and modernization that has occurred over time.

The rise in awareness of rights by women themselves and the confidence to raise their voices to conduct ‘Aurat March’, ‘Me Too movement’ and speak about justice for the killings and rapes of young girls. However, unless we won’t provide women with their individual identity at constitutional level, to begin with, we cannot expect to empower them at any level of the society

We talk about giving respect to women, providing them with equal rights and empowering them to be educated and independent. On the other hand, when we define ‘respect to women’ by associating their identities with men we actually tie their independence to be dependent on men. We prepare women to be strong and self-made, but when they have to face problems like proving their own identities by linking them with men, even at the state level, so what confidence would they be left with? The fact that no documentation or legal matter at state level can be proceeded unless a woman has her spouse’s name on her identity card, if she is married, crushes the moral down. Whilst men do not even need to provide with their marital status, putting names of their spouses is far aside. Why this discrimination? Why can’t we be given the same benefit as men? What has gender to do with basic rights? The bigotry is evident merely in the fact that a woman becomes a Mrs. after marriage whereas a man remains to be a Mr.

A woman in our society is a victim of identity crisis at her own home and when she goes out of the jurisdiction of her home even then the laws and regulations do not safeguard her. In fact, they make her feel more insecure. Identity conflict can affect a women’s mental as well as her emotional state of mind. It makes her more sensitive towards approval of others’ judgements and prone to retaliate with everyone in order to prove her individuality and independence. Most of the times women rights are linked with feminism and portrayed as the dominance of women, though it is as simple as acknowledgement and encouragement of equal rights of women by the entire society, including men and women both.

A lot is being said and done at all levels regarding women rights, which is to be appreciated. The rise in awareness of rights by women themselves and the confidence to raise their voices to conduct ‘Aurat March’, ‘Me Too movement’ and speak about justice for the killings and rapes of young girls. However, unless we won’t provide women with their individual identity at constitutional level, to begin with, we cannot expect to empower them at any level of the society. They will always remain in the state of complexity regarding their own identities. Since identity crisis is not born or created within, it is grown over a period of time through internal and external factors which are nourished by the society at all levels, be it at home, workplace or at state level.

A film writer & director from Islamabad