Ladies, you can divorce your husbands

Do you know Islam gives the right to divorce women if the husband delegates it in the marriage contract?

Both the mainstream sects of Islam, Sunnis and the Shias recognize the concept of Talak-i-tafweez or delegated divorce. The Muslim husband is free to delegate his power of pronouncing divorce to his wife or any person. He may delegate the power, absolutely or conditionally, temporarily or permanently.

Husband may delegate the right to divorce while contracting marriage as per clause 18 of the Nikahnama. Otherwise, it is the exclusive right of the husband. But if the wife has no such right and she wants the dissolution of marriage then she can file a suit for the “Dissolution of Marriage” on the basis of Khula or seeks divorce both through the intervention of the court.

Likewise, in order to get rid of a toxic marriage, Islam empowers the women and gives them the right to divorce their husbands. Furthermore, it is important because in case of Khula (dissolution of marriage with the intervention of court), the woman has to forgo the Haq Mahr which is her fundamental right. This makes her financially vulnerable.

Moreover, some women succumb to abusive marriages just because of their financial insecurities. In such cases, the 8th clause of Nikkah Nama delegates the right to divorce to women without forgoing the Haq Mahr.

The girls focus on a lot of things at their wedding. The dress. The makeup. The celebrations.

Then after she wears her dress for the one time in her life, removed the makeup she applied a couple of hours ago, and the celebrations die down, she’s officially into a relationship. Still smiley-faced.

She isn’t married because she’s done any of the above things and yet they’re the things that took up all her time and attention. Even vast amounts of money.

She’s married because of a legal document she signed. A document that lays down some terms and conditions she is free to impose in her contract she’s entering with the man who aspires to be her husband. Sadly like with the pop-up windows begging us to read the Terms and Conditions before clicking ‘Next’ on our computers, this document is signed largely unread.

This form of delegated divorce is perhaps the most potent weapon in the hands of a Muslim wife to obtain freedom from a toxic and abusive marriage without the intervention of any court.

Notably, the delegation of power to divorce may be made even in the post-marriage agreements between the husband and the wife. Such an agreement is valid, and such conditions are reasonable and not against Islam or the law.

Importance of Delegation of Divorce

Usually, Muslim majority countries are less developed and therefore, have not much women protection laws and mechanisms. However, Islam has granted the highest forms of protection to the women in all regards. For instance, Haq Mahr is obligatory for men to ensure the financial security of their spouses.

Despite the fact Islam has given ample security and rights to women, our society does not let women enjoy these right. Ironically, the families and the nikkah reciter do not let the bride and groom to review their marriage contract that rests the foundation of their relationship. Moreover, the elders struck off the most sensitive and important clause of the marriage contracts without the consent of the bride. 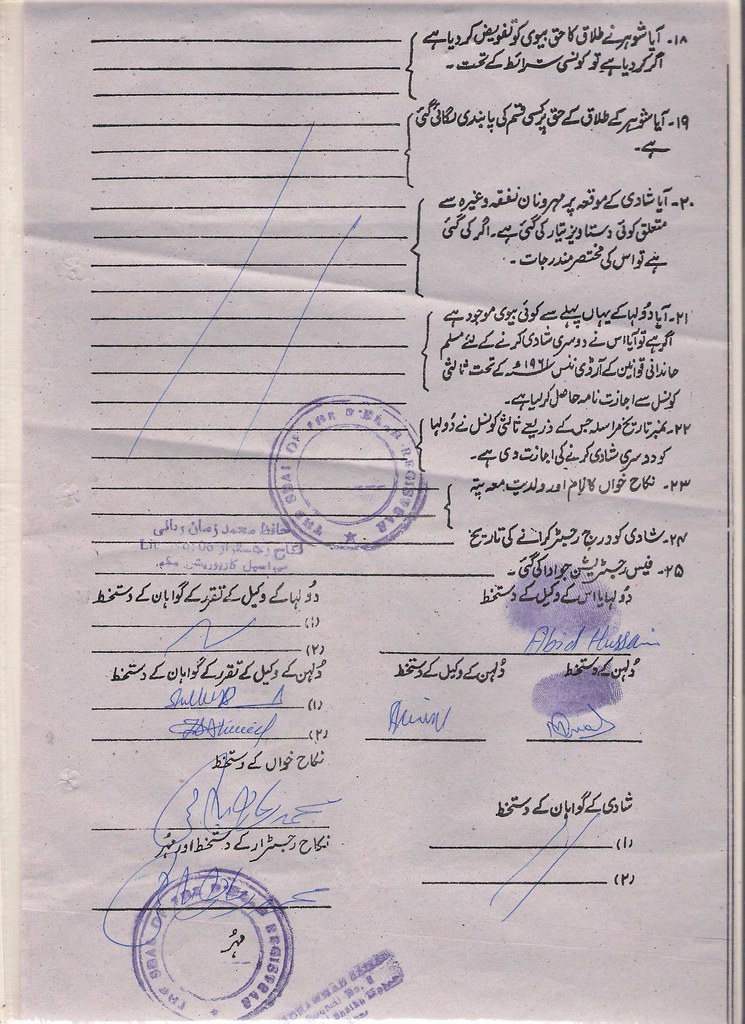 However, if a bride tries to voice her opinion regarding the marriage contract, the families of both sides silence her.

Notably, Pakistani legislatures took worth mentioning initiatives to address the issue. The advocacy campaigns took a number of NGOs on board. According to the recently passed laws, the marriage registrar and the nikkah reciter would be placed behind the bars if he struck off the clause 18, 19 or 20 which are about woman’s security and well-being.

So ladies, if you’re thinking Pakistani girls simply HAVE to hang their heads submissively and accept their rights being slashed out of the document, that’s not true. Know your Rights and fight for them!