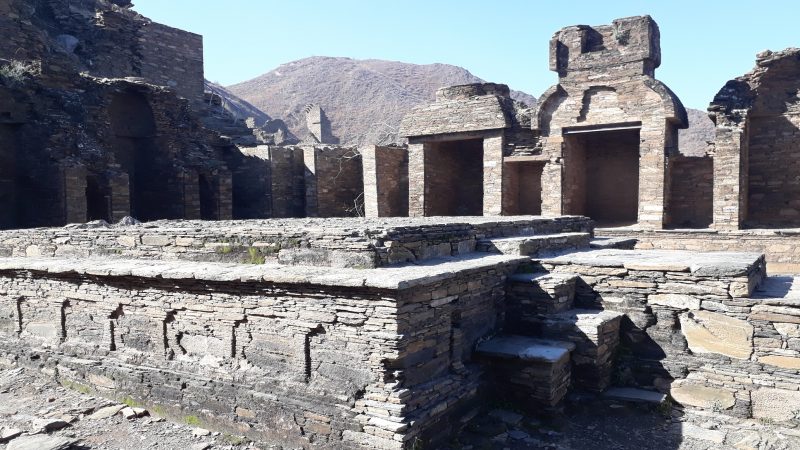 Pakistan is endowed with a large number of ancient sites and historic structures. Indeed, these historic assets are our link with the past.

In an age when globalization is all pervasive, it is Pakistan’s ancient linkage that provide us with a distinct identity. Lest we forget, since this seems to be our best kept secret from the outside world that Pakistan is a treasure house of ancient heritage spanning over scores of centuries.

Pakistan is home to Mehrgarh, Moenjodaro and Harappa, it is the land of the sp3ectacular Gandharan civilization as the seat of Buddhism , the devotional carvings of the Hindu Shahi temples of the Salt Range and Tharparkar, the stately funerary clusters of Makli, Multan and Ucch Sharif, a fusion of local trabeated and imported accurate, representing successive Sultanate dynasties, the heart-expanding chahar-baghs and jewels like edifices of the greatest kingdom of the world, established by the young ruler of Farghana, the Sikhs emulating the Great Moghuls, and the shared legacy of eclectic architecture with its European overtones, a bouquet of the British who colonized this land.

It is not only the ancient sites and historic monuments but equally the historical urban cores, stretched from the peaks of the Khyber in the farthest north to the southern-most edge of the mighty Indus river , Peshawar, Multan, Thatta and Karachi, and scores of other living cities with their historic environments, all valuable in our search for and understanding of our cultural diversity. for Buddhism is concerned, nit had taken root in areas forming Pakistan about some 2300 back under the Mauryan king Ashoka. Buddhism has a long history in the present day history of Pakistan— over time being part ofareas within Bactria, the Indo-Greek Kingdom, the Kushan Empire, ancient India with the Maurya Empire of Ashoka, the Pala Empire, the Punjab region, and Indus River Valley areas which fall under the present day Pakistan.

Talking about the Buddhist heritage alone, there are hundreds of sites scattered across Pakistan. Among them are the Dharmarajika Stupa in Takht-i-Bahi in Khyber Pukhyoonkhwah, the Votive Stupa, Shinggardar Stupa, the Amluk Dara Supa situated in Taxila ( previously known as Takshashila) and an iconic Buddha statue in Swat. During the last about four years, Bamala in Khyber Pukhtoonkhwah has emerged as a major Buddhist heritage site after the remains of a 1700 years old sleeping Buddha statue were discovered there.

The city of Taxila, about 35 kilometers from Islamabad, with its riches of archaeological sites is generally regarded as the first stop by the foreign tourists particularly Buddhists . Most of the Buddhist archaeological sites in Taxila were built between 600 BC and 500 AD and are located around the Taxila Museum. For over a thousand years during the heydays of Gandhara civilization, Taxila has remained a centre for promoting sculpture, architecture and education in Buddhism. Over 50 sites of archeological importance are scattered within a radius of 30 kilometers around Taxila and all of them are based on the life of Lord Buddha.

Some of the most important sites of Taxila are Dharmarajika Stupa, Bhir Mound, Sirkap, Jandial Temple and Julian Monastry. Relics relating to Buddhist heritage in Taxila are displayed in a chronological order at the Taxila Museum which attracts thousands of foreign as well as domestic tourists to explore the Buddhist heritage every year.

It may be interesting for many to note that Lord Buddha was born in Lumbini in Nepal .

Dharmarajika Stupa situated in Taxila was designated a UNESCO World Heritage Site in 1980.

Another Buddhist site of archaeological and historical importance is in Takht-i-Bahi which is located about 170 kilometers from Islamabad in Khyber Pukhtoonkhwah. The site comprises ruins of an ancient Buddhist monastery situated high atop a 152-meter hill. During the Buddhist period of the Gandhara Kindom to which Takht-i-Bahi belongs, some 1000 BC to 7th century, the area that is now Northwest Pakistan and Southwest of Afghanistan contained numbers of such complexes. Takht-i-Bahi was included in the UNESCO World Heritage List in 1980 as the largest Buddhist archaeological site dating back to the Gandhara period. In addition to two stupas, it has many other relics and remains..

Tope Mankiala in Punjab is the Buddhist site where, according to a legend, Lord Buddha had fed seven hungry tiger cubs with his body parts.

At Katas Raj is a famous Buddhist stupa which is sacred to Hindus, Buddhist and Jains.

Around Peshawar city alone, there are over 500 heritage sites and monuments.

Pakistan is an Islamic country but still cultural heritage and historical monuments of all other religions and faiths are duly preserved and protected as such but still its rich heritage makes it as an important pilgrimage site for the followers of Buddhism everywhere. An expert working with the Buddha Circuit Tourism Bikram Pandey is reported to have underscored the need for linking Pakistan to the International Buddha Circuit given its classical Buddhist heritage in abundance.

The Swat Valley has many Buddhist carvings and stupas, and Jehanabad contains a Seated Buddha statue. Kushan era Buddhist stupas and statues in Swat valley, most unfortunately, were demolished by the Talibans and after two attempts by the Taliban, the Jehanabad Buddha’s face was dynamited. Only the Bamiyan Buddhas were larger than the carved giant Buddha statue in Swat near Mangalore which the Talibans had attacked. Extremists militants such as Talibans have destroyed much of Pakistan’s artifacts left over from the Buddhist Gandhara civilization especially in Swat Valley. The taliban had somehow had targeted Gandhara Buddhist relics for destruction though they had no regards and concerned about number of educational institutions, mosques, mazars etc which they had destroyed mercilessly at ruthlessly. After about nine years of its destruction, a group of Italians had helped in repairing the Buddhas at Jehanabad in Swat.

In March 2013, a group of around 20 Buddhist monks from South Korea had undertaken journey to the monastery of Takht-i-Bahi. They had defied all appeals from Seoul to abandon their trip for safety reasons and were duly guarded by Pakistan security forces on their visit to the monastery , built of ochre-coloured stone and nestled on a mountainside.

As briefly stated above, Lord Buddha was born in Lumbini in Nepal, on hearing lot from his friends Bikram Pandey and Sarad Pradhan who had been to Pakistan on the Buddha Circuit Tourism about the country’s Hindu and Buddhist monuments, a senior journalist and Editor of an English weekly published from Bhairahawa, Nepal, Manoranjan Sharma had visited Pakistan in May 2018 and explore the Buddha heritage here.

In an article which he had written afterwards, he had written ” My Nepalese friends were much surprised to see Hindu temples in Pakistan well-preserved, an impression that you do not from news media. My visit itself threw up more surprises. I found Pakistan quite different from what I had perceived it to be. The roads were safe , the security situation much better than what I had expected ;the infrastructure good and the people friendly. But it was the country’s rich culture and heritage—reasons why I had undertaken the visit that become a pilgrimage due to the holy nature of the heritagesites-that had me under its spell.”

Preservation of heritage along with religious tolerance quite obviously is key to restoring the confidence of pilgrim-tourists and religion especially minorities regions are also being preserved and maintained.

The contemporary Buddhist population in Pakistan is around 1492, may be little more or so. Though many foreigners used to visit Pakistan but foreign tourist inflow into the country had fallen sharply after the 2001 terrorist attacks in USA.

The Punjab Government has launched a 55 million dollars project for the conservation, promotion and propagation of major heritage sites including Taxila to boost tourism under the theme of “Tourism for Economic Growth”

The World Bank has omitted 50 million US dollars under the Punjab Cultural and Heritage Tourism project for Pakistan. The remaining 5 million US dollars will be borne by the Punjab Government. The project spanning over a period of five years envisages work on total 8 heritage sites sacred to Buddhists, Hindus, Jains, Sikhs and Muslims including some on UNESCO’s World Heritage List.

According to the experts, the project on completion will help increase the inflow of tourists into Pakistan by also linking the relationship of its heritage and monuments to those in the region.

The Nepalese journalist further opined in his article:” In the recent history of conflict and natural disasters, Pakistan seems to have been cheated of its great potential for tourism. Despite this, Pakistan has been carrying out infrastructure development programmes ceaselessly. It has built wide highways across the country and possesses good road networks to connect people and resources. Construction work is underway for operation of metro trains in major cities. A separate road lane has been designated for operation of metro buses in Islamabad and Lahore.

Director of UNESCO Pakistan Vibeke Jensen also told the visiting Nepalese journalist that the country has immense potential for tourism, Pakistan can achieve economic growth by developing the International Buddhist Circuit through propagation and promotion of its heritage sites to attract tourists, Pakistan also needs to ease up visa restrictions especially on extension of stay, the logistics around travel and stay are good but these can still be further improved through dedicated services for the tourists and pilgrims, such as separate services for foreigners at airports.

The Pakistan Government is paying special attention to promotion of tourism and has taken number of steps including easing visa restrictions for the tourists as well as foreign investors for boosting tourism as well as exports .

The authorities concerned in Islamabad should also plan on priority basis organizing package tours for visitors from China, Japan, Singapore, South Korea and other countries including trips to the Buddhist sites at Takht-i-Bahi, Swat, Peshawar and Taxila.

The writer is Lahore-based Freelance Journalist, Columnist and retired Deputy Controller (News), Radio Pakistan, Islamabad and can be reached at zahidriffat@gmail.com