Pakistani leaders have been screaming human rights violations in the Indian-held Kashmir all the while wondering why isn’t the world taking them seriously now that they appear to be championing ‘human rights’. The only explanation they could come up with was — the Prime Minister and other top leaders have said this repeatedly- world’s bias towards Muslims. They also like to completely ignore the fact that most of the Muslim world is also not buying it.

But I have another theory: being Muslims may not be the only reason the world is isolating you. You see when a nation that has one of the worst track record when it comes to civil liberties all of a sudden screams it’s newly found obsession with human rights, the world would probably not take note knowing fully well you don’t mean it.

You see, it was September 7th yesterday: a day zealously observed by Sunni supremacists as a victory day when the Islamic nation established and legitimised its meddling with people’s religions and faiths by declaring the minority Ahmadiyya sect as non-Muslims thus paving way for decades of brutal persecution the community still suffers. As pious Muslims celebrated that yesterday, there are two more noteworthy incidents that have been trying to get everyone’s attention:

1) Homophobic messages to ‘progressive’ Liberty Books caused the bookstore to drop books on literature and biographies surrounding queer subjects. The troll, Omar Mateen who apparently works with somewhat progressive organisations such as The Citizens Foundation and the Orange Tree Foundation wrote this to Liberty Books in Zakir Naik-style: 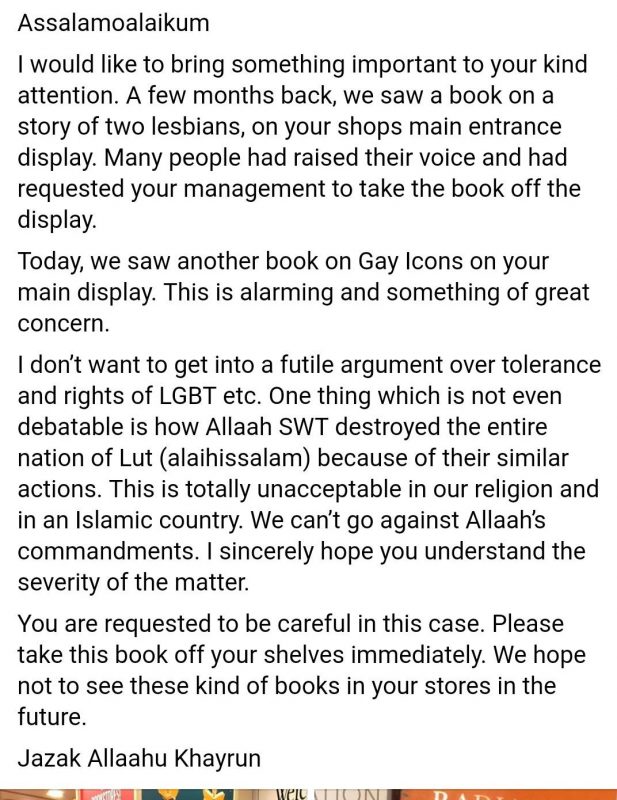 And Liberty Books complied in the similar language basically agreeing to everything that was asked. And as you can see from the comments, this response by Liberty Books gave Mateen the courage to put forth more demands like he gets to dictate in this and at this point Liberty Books just bends over and agrees to everything. 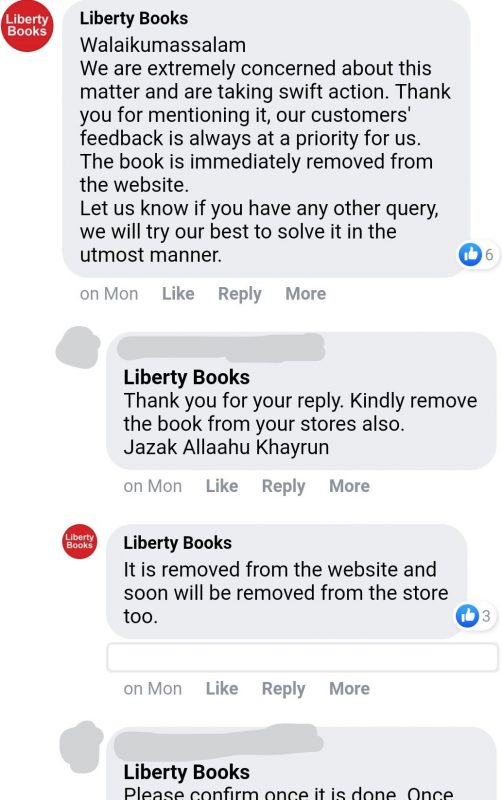 And we all used to cherish Liberty Books thinking they’re progressive. They are naive if they think they have tackled the situation by silencing the queers as this will not stop here. Liberty Books will then have to remove the queer references and homoeroticism in our own indigenous literature. And the next step would be to take off Manto and gradually all the books until the store is left selling Quran commentaries and Hadees books. This is the country where a prominent columnist had labeled Malala’s book against Islam for God’s sake.

2) The second incident is of the lawyer who assaulted woman police officer for doing her job was set free on a technicality which the reports now say occurred because the police may have tanked their own woman officer’s case to protect the male lawyer.

Lawyer Ahmed Mukhtar had assaulted the woman police constable Faiza Nawaz when she told him not to park his car at a police check point. Mukhtar was then arrested and presented before court in hands-cuffed in chain held by the same woman officer but the local court’s judge set him free on a technicality that on one of the places in the complaint his name was spelt wrongly. This doesn’t end here. The male lawyers of several bars staged a protest against this ‘humiliation’. Yes, let that sync in. The protest was in support of the culprit and not the victim. How dare a woman hold the chain of an arrested man who assaulted her in uniform while taking him for court appearance? How humiliating.

The question is not of this isolated incident. It’s of the overall attitude. How the old boys club came together to make a mockery of the justice system and openly saying they will not tolerate this ‘humiliation’ of a ‘dignified’ man paraded by a woman like that. And this went on while the victim who is a police officer herself was seen begging for justice in pleas to higher ups.

So forgive me for saying this dear majesty Prime Minister Imran Khan you know who and his minions, when you fail to protect human rights of your own people and claim to champion the human rights to the world, you will not be taken seriously.

The writer is a journalist covering human rights in the digital age. He is also the editor of his award-winning blog VoiceOfInternet.com.