Dengue is a recent addition to the local vocabulary. It is becoming common for its debilitating effects on human health. For the last few years, it was a Punjab problem. However, from here, infected mosquitoes have successfully travelled miles to develop their new habitat in Sindh.

Town talk of dengue in Karachi may not be a reflection of cases exclusively from Karachi, as masses move to Karachi for its better health facilities. Hence, it reflects the overall scenario of Sindh province as a whole.

Unlike the previous government of Shahbaz Sharif in Punjab, Sindh, as of today, has not shown any practical steps to curb the emerging health issue. If negligence prevails, I can foresee a big medical issue that may cause heavy mortality.

Recent rains have paved every abiotic factor to present best breeding places for mosquito life-cycle. This may help multiply the virus and take it to the point of no return. Dengue fever is a mosquito-borne tropical disease caused by the dengue virus. Symptoms typically begin three to 14 days after infection. This may include a high fever, headache, vomiting, muscle and joint pains, and a characteristic skin rash. 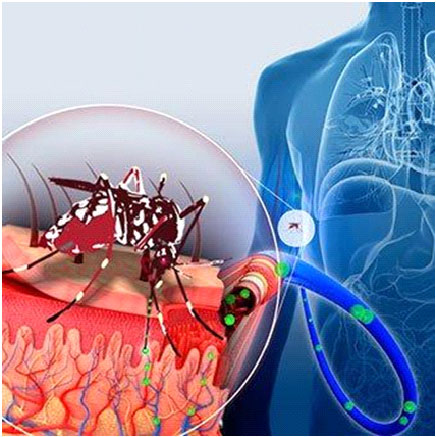 The WHO ranks dengue fever as a mosquito-borne viral infection, causing severe flu-like illness and, sometimes, causing a potentially lethal complication called severe dengue. The incidence of dengue has increased 30-fold over the last 50 years. Between 50 and 100 million infections are now estimated to occur annually in over 100 endemic countries, putting almost half of the world’s population at risk.

Dengue fever was first recognized in the 1950s during dengue epidemics in the Philippines and Thailand. Today, it affects Asian (including Pakistan) and Latin American countries and has become a leading cause of hospitalization and mortality among juvenile victims and adults in these regions.

The mosquito plays an important role as a vector and transmits the infective stage of the virus to an uninfected human. (or vector) and humans as the main victim and source of infection.

The dengue virus has four distinct serotypes (DEN-1, DEN-2, DEN-3 and DEN-4), which belong to the genus Flavivirus, family Flaviviridae. All the genotypes are based on genetic diversity, some being more virulent.

A species of mosquito Aedes aegypti acts as the main vector that transmits the viruses that cause dengue. The viruses are passed on to humans through the bites of an infective female Aedes mosquito, which mainly acquires the virus while feeding on the blood of an infected person.

Once infected, humans become the main carriers and multipliers of the virus, serving as a source of the virus for uninfected mosquitoes. The virus circulates in the blood of an infected person for 2-7 days, at approximately the same time that the person develops a fever. Patients who are already infected with the dengue virus can transmit the infection via Aedes mosquitoes after the first symptoms appear (for 4-5 days; maximum 12). In human’s recovery from infection by one dengue virus provides lifelong immunity against that virus serotype. However, this immunity confers only partial and transient protection against subsequent infection by the other three serotypes of the virus. Evidence points to the fact that sequential infection increases the risk of developing severe dengue. The time interval between infections and the viral sequence of infections may also be of importance.

How a man gets infected?

The vector-borne dengue virus infection spreads via the bite of a striped Aedes aegypti and Aedes albopictus mosquito that has previously bitten an infected person. The mosquito flourishes during rainy seasons but can breed in water-filled flower pots, plastic bags, and cans year-round. One mosquito bite can cause the disease.

The virus is not contagious and cannot spread directly from person to person. It is mosquito-borne, so there must be a person-to-mosquito-to-another-person pathway. A mosquito bites a dengue-infected person and becomes infected with dengue. That mosquito then bites another person and passes the dengue virus infection to that person. The full life cycle of the virus involves the Aedes mosquito as the vector (transmitter) and the human as the source of infection.

Symptoms are confusing and vary in victims. Therefore, treatment based on clinical confirmation may bring positive results. A person infected by the dengue virus develops severe flu-like symptoms. The disease, also called ‘break-bone’ fever affects infants, children and adults alike and could be fatal. The clinical features of dengue fever vary according to the age of the patient.

Individuals should suspect dengue when a high fever (40°C/ 104°F) is accompanied by two of the following symptoms:

Pain behind the eyes

Symptoms usually last for two to seven days, after an incubation period of four to 10 days after the bite from an infected mosquito. The next 24 to 48 hours of the critical stage can be lethal; proper medical care is needed to avoid complications and risk of death.

Surprisingly, there is no specific treatment for dengue fever. However, victims may seek medical advice, and take bed rest and drink plenty of fluids (water and fresh juices. As a matter of fact, during every infection, the body develops a fever as an immune response and on such high-grade fever, the virus is killed. However, if fever is persistence and continues to increase, Paracetamol can be taken to bring down fever and reduce joint pains.

Sometimes, aspirin or ibuprofen are also on the prescription list, which should be avoided as they can increase the risk of bleeding.

This is the most important parameter and must be taken into consideration. Vector control by use of mosquito-killing agents and proper management may help reduce, if not eliminate the problem.

WHO promotes interruption of human-vector contact by developing strategic approach known as Integrated Vector Management (IVM) to control mosquito vectors. However, controlling Dengue mosquito is relatively difficult as the mosquito uses a wide range of confined larval habitats, both man-made and natural. Some man-made container habitats produce large numbers of adult mosquitoes, whereas others are less productive. Consequently, control efforts should target the habitats that are most productive and hence epidemiologically more important rather than all types of container, especially when there are major resource constraints. Mosquito-repellents may be applied to exposed skin or clothing. The use of repellents must be in strict accordance with label instructions. Insecticide-treated mosquito nets afford good protection for those who sleep during the day (e.g. infants, the bedridden and night-shift workers).

Household fixtures such as window and door screens and air-conditioning can also reduce biting. Use of pesticides is also an option. Pesticides are toxic to some degree. Safety precautions for their use – including care in the handling of pesticides, safe work practices for those who apply them, and appropriate field application – should be followed. This may reduce the risk if applied by related authorities. In the current scenario, there is dire need to run state-supported regular counselling aids both in print and electronic media aimed at mass awareness towards Dengue issue.

The writer is a professor in the Department of Parasitology