Meet Amin. He’s not a celebrity, politician, or a famous person. Yet, this fruit vendor or phal wala is one of the many heroes of Pakistan’s informal economy. He is an integral part of hundreds of households serving their everyday demand of fruits at their doorsteps.

It’s nine on a Saturday morning and Amin steps softly, barefoot, around his small shanty house, a shared accommodation of three people, located in Qayumabad. He is late but careful not to interrupt the morning chores of his fellow inmates, who, too, will be out in an hour with their carts. He hurries out with his thela without having breakfast. 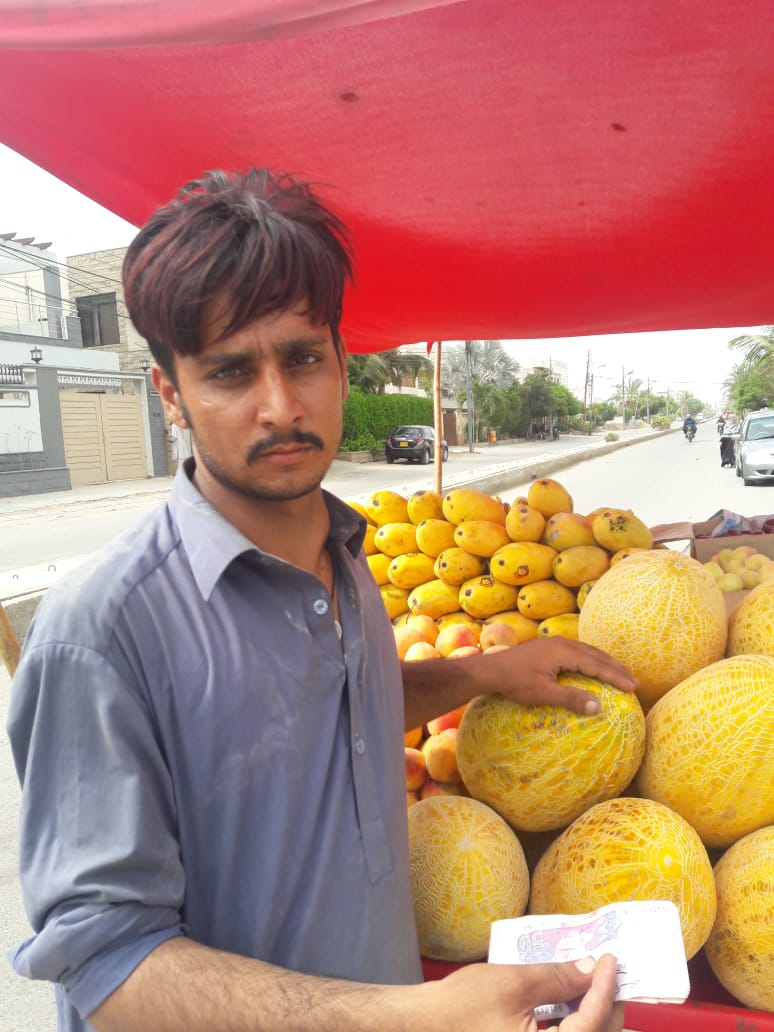 He has to collect fruits from the nearby warehouse, arrange them nicely on his cart every morning, a common arrangement between groups of vendors, who either own or rent a pushcart and buy fruits collectively from Sabzi Mandi, which are transported on a carrier van to Qayumabad Warehouse. From here, they distribute their shares on their pushcarts and vendor around the streets. “I come out at around 10 every morning with a full cart of fruits. It takes two hours to reach residential areas of Defence, while less time for going back to home with an empty thela,” Amin said. “I roam around the commercial, residential strips and near the mosques during pray time,” he added. “I earn Rs 1500 to Rs 1600 in a day and support my family staying back in Punjab.” Starting with very few resources or almost bare-handed from the outset, and facing numerous obstacles on the way, these vendors on wheels are contributing to the development and poverty reduction. 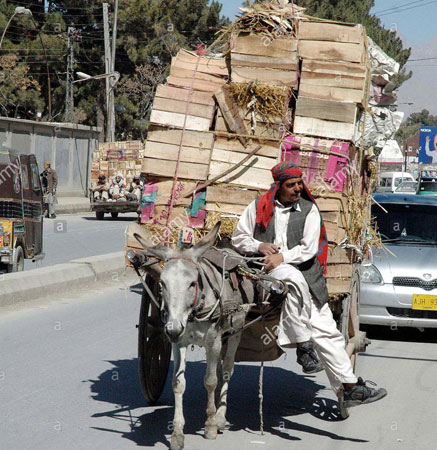 These street vendors and service providers are the heart of Karachi’s informal economy. Yet, their services in an urban space escape attention despite being the primary means of combating poverty and of economic survival for many inhabitants of the city. For years, Gholam Qadir has been serving as a trash trader-raddi-paper wala or tin-dabbe wala. Residents respond to his calls whenever they have to discard useless items like cartons, bottles, old newspapers, and even old furniture.

“I don’t have my cart, yet I ferry around trashes from the houses to the retailer of used items and earn only Rs 200 to Rs 400 in a day,” Qadir said. “Yet, I don’t give up as I have found the work bare-handed,” he added. 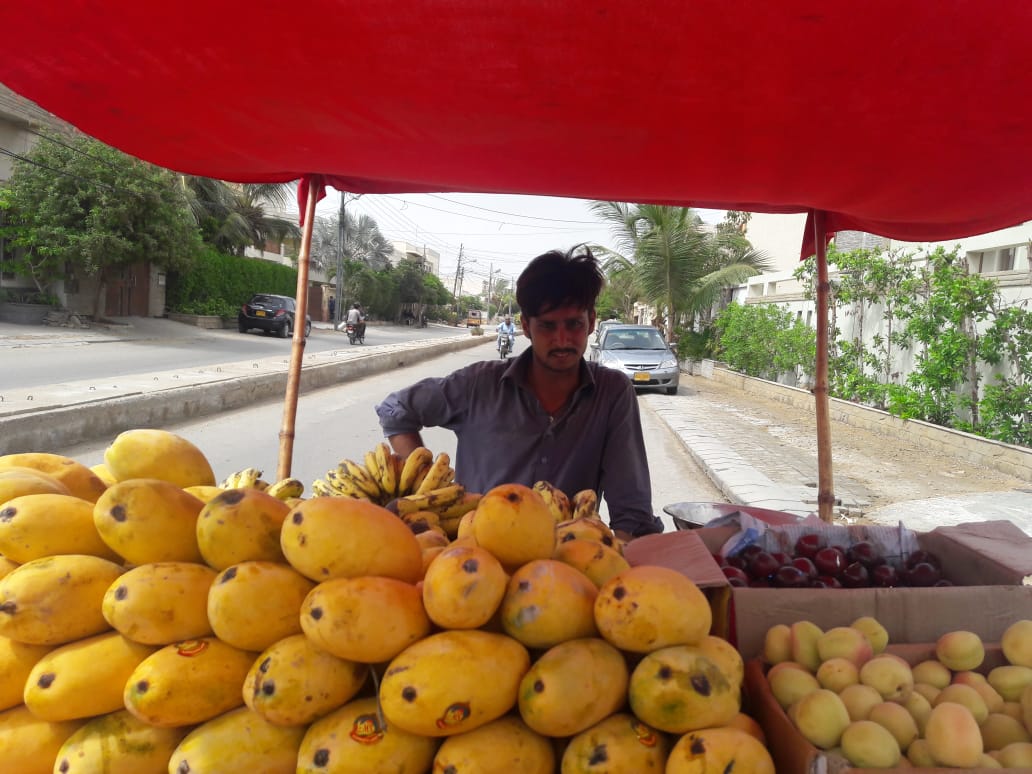 One thing has remained constant for generations: the echoing chants of the city’s pheriwalas, or street vendors. People wake up to the sound of hawkers coming to sell fruits and vegetables. Popular among the children is the ringing bell of the ice cream vendor on a tricycle. “The sound of the bell makes kids and adults alike come running out of the houses to buy ice cream,” said ice cream seller Saawal. He paddles around the whole day to sell ice cream in different parts of the city. “I make Rs 700 to Rs 800 in a day, which is unsufficient for my family of eight. It is fine in the summers, but consumption is less in the winters and my income slides down to Rs 300 to Rs 400,” he said.

It is interesting to note that until the 1980s, donkey-carts were registered by Karachi’s metropolitan authorities to keep a count on the numbers plying Karachi’s roads, but for the past many years authorities have stopped keeping track of the vehicle

There is an inseparable bond between residents and street vendors; a phal wala, a person selling fruits, vegetable vendor, ice cream, charpoy weaver too, and sometimes just a dhobi on gadha garhi-laundry worker on a donkey cart.

Traditionally, certain professions in the city have conventionally used donkeys as their primary mode of business transport. For instance, some hundreds of families in Malir and Dhobi Ghat areas of Karachi own donkey-carts to collect and deliver washable clothes to their clientele. The donkey cart laundryman Baloch, who collects washable clothes and delivers back to the houses, appears satisfied with his profession. “I come to deliver every week. Sometimes delivery is delayed due to weather conditions and outages,” the donkey cart man contended. “Madams” show displeasure, but don’t cut off as we charge nominal and minimal, he observed.

“What’s hard about this job?”

“Everything is hard. Maintaining a donkey itself is hard,” he replied. “Owning a donkey-cart is as good as owning a shop in Karachi. It’s mobile, and you can carry a huge number of goods around the city. If I had to incur the fuel cost, it simply won’t be profitable,” he said.

It is interesting to note that until the 1980s, donkey-carts were registered by Karachi’s metropolitan authorities to keep a count on the numbers plying Karachi’s roads, but for the past many years authorities have stopped keeping track of the vehicle. As the middle-class of the city has expanded, it is street vendors and service providers who have catered to their little and large desires providing low-cost alternatives to expensive wishes and wants. “Sometimes it is impossible to pay for laundry shops as they charge 100-200 even for a Kurti. But home service providers on donkey carts are affordable as they charge under Rs 50 even for a large sheet,” said housewife Sadaf Saeed.

These vendors are a fixture of Karachi’s streets and Karachiites’ routines, vital to the culture of the city. But day to day, they struggle to do the business against a host of challenges: city codes and regulations on street vending, exorbitant fines for small violations (like setting up an inch too close to the curb). Not to mention the weather, the whims of transit and foot traffic, and the trials of standing for hours, often alone, with no real shelter or private space.

They hustle on the street from dawn to dusk to serve the needs and desires. Fighting poverty bare-handed, these street vendors are struggling to format their fortune on the wheels.

The writer is a Karachi-based journalist