Lawfare over Warfare: a way forward on Kashmir

It has been one month since the siege of the Indian-occupied Jammu and Kashmir by the BJP government and its armed forces. Yet there seems to be no hope for the inhabitants of the valley as the international community in general and Pakistan in particular has not been able to put enough pressure on India to end its illegal and forceful occupation. Pakistani policy makers have also not been able to put forward a workable and an effective short and long term strategy to assist the Kashmiri people in the hour of need. 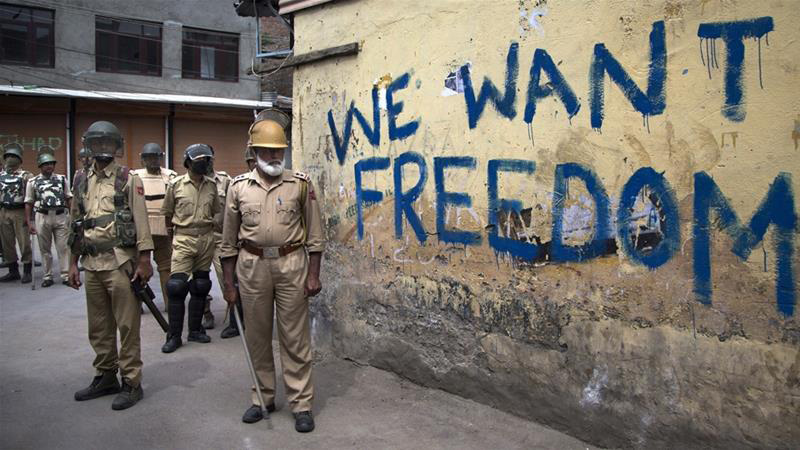 On the other hand, intellectuals and think tanks also seem confused over the options and solutions, hence feeling helpless in the current circumstances, and favoring the status quo to be continued or to wage war as a last resort. There is a strong realisation in the public spheres that even friendly criticism is not healthy in crucial times like these but only a sound way forward, other than kinetic warfare that can be opted to counter India’s action in the IoK. Such a way forward lies in the ‘lawfare’ as a domain of non-kinetic warfare that not only demands a change in the terminologies of the popular narratives but also the shifting of approach while looking at the Kashmir issue, hence strengthening Pakistan’s case on Kashmir.

Before assessing all options, Pakistani policy makers have to realise that in essence, the revocation of Article 370 means the nullification of the Instrument of Accession. Article 370 was added to the Indian constitution in 1952 to signify the importance of the Instrument of Accession, hence giving it a permanent legal position conditioned to a plebiscite. The recent illegal action by India of revoking the said article has not only stolen the identity of Kashmiris but have also nullified the Instrument of Accession, leading Kashmir to its pre-1947 status as an independent state. With this action, India has not only lost the moral ground but also its legal case on Kashmir.

After the nullification of the Instrument of Accession, now every Indian action in Kashmir lies under forceful occupation in the international law terminology. The Fourth Geneva Convention (GC IV) strongly prohibits the occupation of a territory by threat or use of force. It also prohibits forced or voluntary transfer of population from its territory to the occupied territory as per Article 49 of GC IV. In addition, there is a complete framework under the Law of Occupation that binds the occupied force to apply restraints. In case of violation, the occupying force and its actions can be tried under international criminal tribunals and international courts of justice.

Before assessing all options, Pakistani policy makers have to realise that in essence, the revocation of Article 370 means the nullification of the Instrument of Accession

The second option lies under the framework of the international humanitarian law (IHL). What we have recently seen or heard in popular narratives is the undue focus on human rights violations by India that begs our attention towards another shift in approach with the realisation that Pakistan has a wide array of options if a change in approach occurs from the International Human Rights law (IHRL)towards the framework of IHL. The IHRL is mainly applied during peacetime, and the IHL is applied in international armed conflicts. The current scenario in the IoK falls under a war-like situation as there are strong evidences of war crimes taking place with the intention of committing genocide and ethnic cleansing. These crimes directly fall under the IHL. This legal option supported by facts on ground gives Pakistan an opportunity to take India to the international criminal tribunals for war crimes as well as help legitimise Pakistan’s case on Kashmir. In addition, Kashmiris under curfew and a complete lockdown will be able to receive humanitarian assistance in form of food, medicines etc. as per the IHL framework suggests.

The third option that Pakistan can opt is associated with the acceptance ofthe UN-recognised terminology for Jammu and Kashmir such as the ‘Indian-administered Kashmir’. The acceptance of the said terminology will provide Pakistan an opportunity to bring the case to the Security Council’s attention, leading towards a binding resolution in favour of a humanitarian intervention (HI under the recognised principle of international law i.e. ‘responsibility to protect’ [R2P]).

India’s forceful occupation creates a strong fear of genocide and ethnic cleansing in Jammu and Kashmir, which begs for international intervention in order to save Kashmir from becoming another Rwanda or Syria. To strengthen the recognised principle, Kashmir must be a successful test case as it fulfils all the criteria under the grounds of intervention based on R2P. Furthermore, R2P also allows neighbouring states to intervene if they fear that the consequences of action taken by a violator state may reach its borders. This option allows Pakistan to effectively resolve the Kashmir issue, finally paving way for the long-ignored plebiscite followed by an international intervention.

While focusing on all these options, Pakistan needs to realise that lawfare as a domain of non-kinetic warfare with the support of other domains offers better rewards than kinetic warfare. Mediation is a trap, bilateralism is useless, and the divided Muslim ummah will further complicate the situation. So in order to consider these options Pakistan has to break the shackles of bilateralism imposed by the Shimla agreement of 1972. India’s recent actions are the instances of material breach. As per Article 60 of the 1969 Vienna Convention on the Law of Treaties, “If a country commits material breach of a bilateral treaty, the other country is entitled to terminate the treaty.” This legal route offers Pakistan a golden opportunity to say goodbye to bilateralism and to invite multilateralism, which is the only way forward on Kashmir.

The writer is an M.Phil scholar of Strategic studies at NDU and an independent researcher