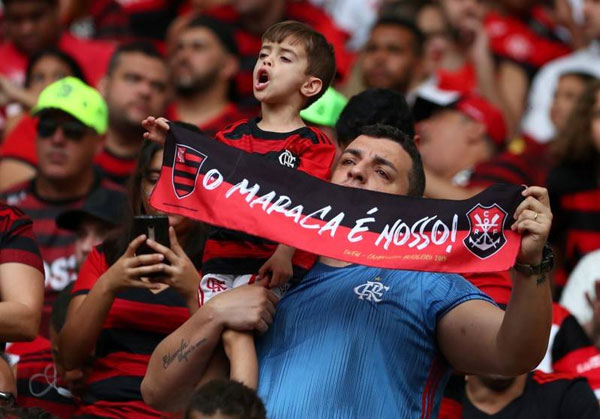 The game is slow and beset by fouls, every match is on TV, and all the best young players have left – but if attendances are any measure, Brazilian football is enjoying a renaissance. Five Serie A clubs have pulled in crowds above 30,000 as the competition approaches the halfway stage and the last time the average was as high was in 1976. “It’s astonishing having the highest average crowds in 36 years in the middle of a massive economic crisis and while we are repeating the debate we’ve had for years about the stadiums increasing being for the elite,” Paulo Vinicius Coelho, one of Brazil’s football’s top journalists and statisticians, wrote on his blog.

Precise reasons: The precise reasons for the increase are harder to pin down but Coelho highlighted clubs’ increasingly sophisticated purchasing and membership schemes as an important factor. It is now easier to buy tickets online and regular fans are given hefty discounts. “Take Palmeiras. If you go to 80 per cent of the games you get priority in buying tickets,” Coelho said. “If I am a member and I pay 139 reais a month then I get a discount. There are around four games a month and so tickets are just 35 reais each match.” Modern arenas built for the 2014 World Cup held in Brazil have made going to the games a more enjoyable experience and the decision to ban away fans from local derbies in Sao Paulo, where three of the four teams with the biggest attendances are based, has made hooliganism less of a concern. A decision to allow clubs to play up to five “home” games a year in an alternative city of their choice has also led to big attendances in places where fans are not accustomed to seeing the top teams in action.

Flamengo form: Other experts highlighted the increasingly competitive form of Flamengo, arguably the biggest club in Brazil and one leading the league after a pre-season spending spree. Flamengo, who have also qualified for semi-finals of the Copa Libertadores for the first time since the early 1980s, have a league-leading average attendance of 47,477 this season at the Maracana stadium. Almost 66,000 people watched them beat Palmeiras last weekend. Coelho said it was early to celebrate and that Brazilian football still has a long way to go to match the big leagues in Europe. The average attendance is still well below that of England, Germany, Spain and Italy. Flamengo’s average this season would still only put them eighth out of England’s top clubs and third in Scotland. “We’ve always spoken about fans deserting the stadium but they were never at the stadiums,”” Coelho said. “The culture in Brazil has always been to go to the big games and not bother about the less important ones. “We can’t get carried away with this but might not be the end either. I think that this is spurred on by four of the biggest clubs discovering formulas that work. The challenge now is to get fans going to all the games and not just the big ones.”