The issue of solid waste of Karachi

Cities are formed with concentrated population around a certain place where rural living style can no longer be maintained. Urbanisation has led to formation of cities with population in millions, equal to the population of empires just two centuries ago. With concentrated population and increased economic activities came the problem of waste. Ibn Khaldun, the founder of social psychology and economics, in his landmark book Muqaddimah wrote that once a certain place is over-populated its air is no better to live. In his times, it seems that air pollution became a problem mainly due to heating and cooking along with public baths. As people were using organic material, solid waste in its less amounts was decomposed by nature. However, with creation of large cities and introduction of inorganic material, mother earth could no longer decompose the waste. 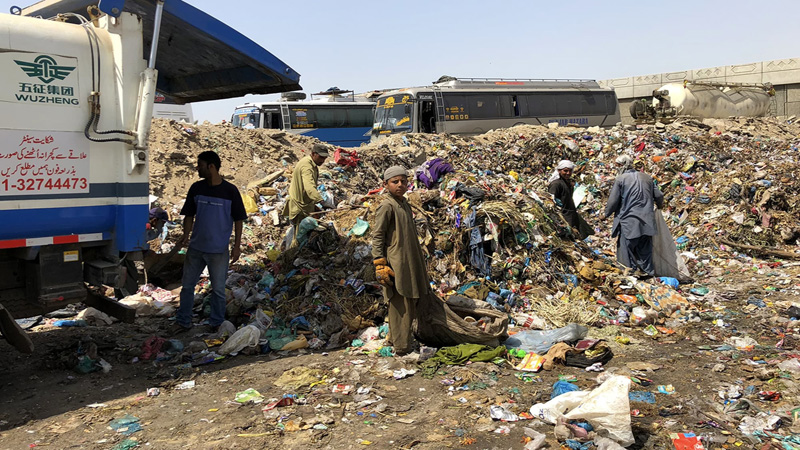 In our region, the earliest indicator of proper waste management comes from a waste collection point (secondary storage in technical terms), found in the remains of Mohenjo Daro. This symbolic city of the Indus Civilisation managed it almost six thousand years ago, while Larkana, a modern city in its surroundings, is still struggling with solid waste problems. To a much larger scale, the problem also exists in Pakistan’s largest city, Karachi. The solid waste problem has been prevalent in Karachi since the last three decades. Karachi is a major attraction for population due to its extensive economic activities. There is a severe lack of data, planning, will and financial resources to solve the ever-growing problem. In addition, widespread corruption at every level and blame games among stakeholders are the two major reasons behind failed attempts to resolve the problem.

It must not be forgotten that the Karachi city has an area of almost four thousand square kilometers with a population of at least seventeen million. Managing such a big city is not an easy task. Recently, many so-called experts have been comparing the city with Lahore where waste management is much better. Lahore has an area of two thousand square kilometers and a population of 10 million. In order to maintain the city, Lahore is spending almost one billion rupees a month; this can give a hint regarding the scale of financial resources required for Karachi. It won’t be double but almost triple because of increased distances to carry waste in Karachi.

In case Karachi needs three billion rupees a month, and if ten million people from its population can pay, the per capita cost would only be Rs 300/month. It implies that financial resources can be managed only if the inhabitants can have better services and have faith in the system. A financial model where the rich and the super rich of the city can subsidise those who can’t pay much can also be devised.

Karachi’s solid waste management problem is an opportunity for the entire country. With high level literacy rate and exposure, the population might be more willing to cooperate. The culture of community work is well developed in the city unlike in most of the rest of the country, with the exception of north Pakistan. Karachi is producing about ten thousand tons of waste a day; however, the backlog of millions of tons in the city makes the situation more troubling. Waste is produced every day with no break; it needs better and efficient collection; once collected, this waste will also require safe disposal. This segment has been ignored to date throughout Pakistan.

Karachi is producing about ten thousand tons of waste a day; however, the backlog of millions of tons in the city makes the situation more troubling

Karachi needs at least three waste disposal sites at suitable locations around the city to optimise waste transport costs. In the periphery of the city, it is possible to build dry landfills, which would be much cheaper than those required for Lahore and the rest of the country. The city must be divided into previously existing eighteen towns, each having its own solid waste management authority or company responsible for waste. Experiences gained from Punjab and the Sindh Waste Management Board can help to devise a much better solution.

However, these solutions would serve only medium-term problems. For long-term sustainable solutions, the city must follow the model developed and implemented in the Tamil Nadu state of India. Community cooperation and a coherent state level policy helped Tamil Nadu to exclude waste dumps and secondary transport with heavy vehicles from its waste management systems. The state introduced and implemented source segregated waste collection and established seven hundred mini composting facilities at community levels. This decentralised approach helped the state to reduce its costs by almost fifty percent. An important success factor was continuous public awareness programme lasting for years rather than our short-term cleanliness campaigns and cleaning weeks.

The Karachi solid waste management system needs institutional, technical and financial restructuring. It may bring a long-term sustainable solution for the entire country; however, it needs careful planning, dedication, honesty, financial resources and time. No good solution or product comes to life overnight. The work should be done in a technically correct manner and not left to the popularity campaigns of politicians. The city has all the factors necessary for successful waste management. Time has come to own our waste produced due to commodities we utilised for our pleasure, and Karachitians are among the people who are the most responsible ones.