‘Easy Rider’ and the legacy of the counterculture movement

* 'Easy Rider', prolific actor-director Dennis Hopper's debut feature, was shot in 1968 on a budget of $400,000 during the Mardi Gras festival in New Orleans 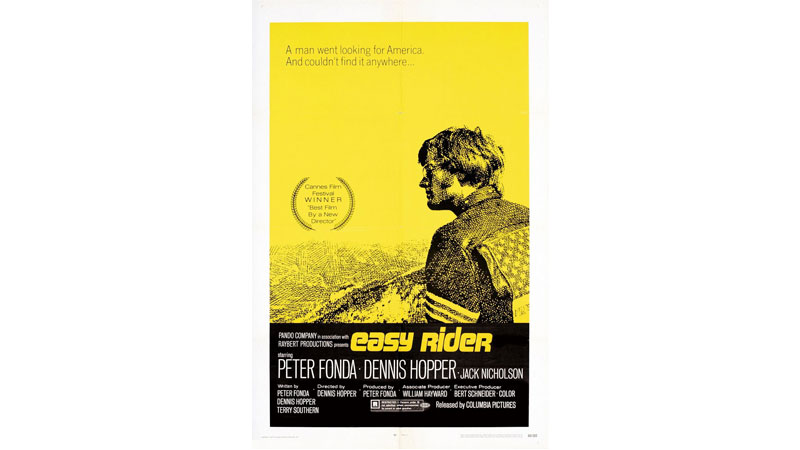 With the ever-escalating turbulence of social change and democratic reforms that have now become a staple of the 21st Century, it can be easy to forget that propagating ideology that runs opposite to the aims of the establishment and criticising its methods, was once considered to be a revolutionary course of action; the counterculture movement of the 1960s could be considered one of the most recent instances, whose effects are still felt today.

The post-war cultural stranglehold of the 50s, and liberal discontent with the status quo led to an explosive rebellion. Yet with the end of the Vietnam War in 1975, and the end of Hollywood’s Golden Age with the Manson (himself being an outsider to counterculture) cult’s murder of Sharon Tate, the once restless entity of rebellion faded into the background of history.

However, as attention is brought once again to the 60s and the counterculture movement in the form of Quentin Tarantino’s latest, Once Upon A Time In…Hollywood, and with the recent demise of Peter Fonda, there seems no better time to discuss the impact and legacy of an artefact of the era, Easy Rider, now approaching its 50th anniversary.

‘Easy Rider’, prolific actor-director Dennis Hopper’s debut feature, was shot in 1968 on a budget of $400,000 during the Mardi Gras festival in New Orleans; Dennis Hopper’s paranoia over the film being mutilated in post-production led to the unedited film being filled with errors.

The tribulations endured by the crew proved to be fruitful; a year later, ‘Easy Rider’ won the First Film Award at Cannes; at the 42nd Academy Awards, the film was nominated for Best Original Screenplay and Jack Nicholson was nominated for Best Actor in a Supporting Role; grossing $60 million worldwide, it ushered in not only a resurgence in independent film, but a movement of young filmmakers who came to prominence in the 1970s, known as New Hollywood. In spite of the passage of 50 years since its release, its themes and undertones remain as relevant today as they did in 1969.

The tribulations endured by the crew proved to be fruitful; a year later, ‘Easy Rider’ won the First Film Award at Cannes; at the 42nd Academy Awards, the film was nominated for Best Original Screenplay and Jack Nicholson was nominated for Best Actor in a Supporting Role; grossing $60 million worldwide, it ushered in not only a resurgence in independent film, but a movement of young filmmakers who came to prominence in the 1970s, known as New Hollywood

The plot of Easy Rider seems laughably simplistic; two carefree bikers, Wyatt (Peter Fonda) and Billy (Dennis Hopper), after being paid a large sum for transporting cocaine from Mexico to Los Angeles, embark on a road trip to New Orleans in time for Mardi Gras, and experience tribulations that change their view of America.

The first of many adversities Wyatt and Billy face occurs at the opening of the film, where they are refused a room at a motel due to their peculiar appearance, despite offering to pay extra. As they cruise across the dusty roads of the Southwest, the film’s now iconic soundtrack kicks in with the boom of “Born to Be Wild”, with the soothing drone of their motorcycles setting the tone for the rest of the film.

Cinematographer László Kovács frames untamed landscape of the South as an untamed realm populated by breath-taking canyons and boundless possibilities. After stopping at a farmstead in Arizona, they pick up a “hippie” hitch-hiker, and travel to a countercultural commune, depicting the lives of much of the hippie community at the time.

Later in the film, the duo is arrested on false charges (“parading without a permit”) in another display of conservative prejudices, in New Mexico, where they encounter ACLU lawyer George Hanson (Jack Nicholson), a laid-back alcoholic who negotiates their release, and accompanies them on their journey. Their stop at a small-town Louisiana diner, and the comments of its customers is the most direct exposition of the film’s themes; remarks uttered by customers include:

“I think we should put them in a cage and charge admission to see them.”

“We might have to bring him to the Hilton before it’s over.”

These comments exemplify the barrier between the trio and the customers; despite both groups preaching freedom, only the latter are disturbed by Billy, Wyatt and George’s self-expression and appearance; George, a small-town, reputable lawyer, would have been treated with respect if not for his desire to obtain the freedom so often preached to him; the townspeople approve of freedom so long as it conforms to their ideals of normalcy. He pays the price for freedom when the trio, asleep at a camp outside town, are brutally attacked by the town’s inhabitants. Although Billy and Wyatt survive, they discover that George has been bludgeoned to death, casting a looming shadow of hatred over the film’s otherwise calm atmosphere. The reason for the attack? Fear of a kind of freedom foreign to the townspeople. As George’s reflection on individual freedom so succinctly demonstrates:

George: “Oh yeah, that’s right, that’s what it’s all about, all right. But talkin’ about it and bein’ it – that’s two different things. I mean, it’s real hard to be free when you are bought and sold in the marketplace. ‘Course, don’t ever tell anybody that they’re not free ’cause then they’re gonna get real busy killin’ and maimin’ to prove to you that they are. Oh yeah, they’re gonna talk to you, and talk to you, and talk to you about individual freedom, but they see a free individual, it’s gonna scare ’em.”

Tragically, even after reaching their goal of Mardi Gras, towards the end of the film, the escalation of prejudice reaches its peak when two men in a pickup truck pass by Billy and Wyatt; disgusted by them, they fire a shotgun at Billy, resulting in a fatal crash. As Wyatt desperately turns back to get help, the driver of the truck fires at him, knocking him off his bike, as what remains of it combusts. The final sequence is a summation of the rise and fall of the counterculture movement; triggered by frustration and a desire for freedom, it ended in violence caused by those that it scared.