* After the Hamd-o-Naat portions, the editor has reserved a chapter for contributions by Dr Muhammad Ajmal who was a poet, writer, psychologist and educationist at the same time 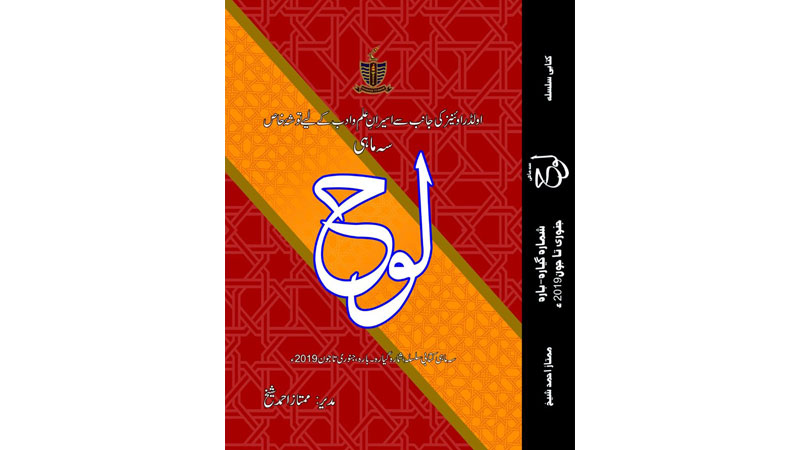 Living up to its reputation, editor Mumtaz Ahmad Sheikh has published another issue of quarterly literary magazine Lowh covering the first half of 2019.

It is an amazing feat that he manages his work (business) and passion (literature) simultaneously keeping quality in both endeavours in mind. Mumtaz admits in his editorial that two decades ago he had initiated a gathering of poets for a Mushaira under the banner of Old Ravians Association so that reformation in the decedent society could be achieved. What followed by anarchy, mutual abuse, and inconsistence in all forms of our society. So he desires to offer reformation through the advent of his quarterly magazine ‘Lowh’. Let us see what he has offered in the present issue.

After the Hamd-o-Naat portions, the editor has reserved a chapter for contributions of Dr Muhammad Ajmal who was a poet, writer, psychologist and educationist at the same time. He studied at Rang Mahal Mission High School where he remembered to have studied from Master Malyaraam, Padmana Singh (Maths) and Angel (English). He liked to visit a close-by Chishtiya mosque and learnt a lot from Maulvi Abdullah Ghaznavi. He matriculated from there and then joined Government College in 1935. He stood first in Masters in Philosophy. He went to many places like Junaid, Campbellpur and Rohtak for vocation but Lahore’s attraction brought him back. For his doctoral work he was initially attracted to Freud but later moved to Mrs. Strauss. He started reading Ibn-e-Arabi. During his stay in London he studied dissolve psychology. Returned and joined Government College. In 1955 he went to UK again and completed his training. Government appointed him psychologist in 1955 till 1966. He returned and joined GC again as head of the Department. In 1970 he was appointed as Principal of GC and VC of Punjab University in 1972. Dr. Amjad Tufail in his submission says that Dr. Ajmal was more a man of words rather than of writing.

This issue of Lowh has included an essay titled ‘Nafsi Tareeq-e-Ilaaj Main Musalmanon Ka Hissa’ (Muslims’ contribution in treatment of psychological disorder). Contributions of Shah Waliullah and Shah Abdul Maali have been mentioned and that of Maulana Ashraf Ali Thanvi.

He discovers that Impulse can be controlled by remembering the Almighty in the spiritual journey.

This issue of Lowh has included an essay titled ‘Nafsi Tareeq-e-Ilaaj May Musalmanon Ka Hissa’ (Muslims’ contribution in treatment of psychological disorder). Contributions of Shah Waliullah and Shah Abdul Maali have been mentioned and that of Maulana Ashraf Ali Thanvi

Dr. Moin uddin Aqeel wonders whether Dr. Jamil Jalbi was an intellectual first or a substantive critic. If latter quality surfaces then the question arises as to whether he was a critic of literature or that of Pakistani culture (Page 49). Sadaf Mirza encompasses Jalbi’s journey from Aligarh to Karachi. She discloses that Jalbi was student of Maulvi Ismail who in turn was a student of Maulvi Ismail Meerthi.

The corner on short stories is a voluminous one. Contributors are Rasheed Amjad, Anwar Zahidi, Muhammad Ilyas, Akhlaq Ahmad, Ali Tanha, Amjad Tufail, Musharaf Alam Zauqi, Tahira Iqbal, Gulzar Javed, Bushra Ijaz, Shamoil Ahmad, Khalid Fateh Muhammad, Shahnaz Shoro, Rafaqat Hayat, Nighat Saleem, Sumera Naqvi, Shaheen Kazmi, Arshad Iqbal, Munir Ahmad Firdaus and Adam Sher. This reviewer shall discuss the last contribution titled ‘Saaeye’ (shadows). Its theme is about a few youngsters (students) listening to a singer namely Naifa who happened to be a Christian. Shahid was attracted towards his flute playing. Shahid was admitted to a school that lacked teaching and laboratory facilities. PT Master thought it’s necessary to warn Shahid of his licentious activities. He even advised Shahid to shift to a better school. Shahid joined a musical band; PT Master taught the band how to play Duff, Clarinet, and Drums etc. One day PT Master visited their class room and said to the teacher to teach the students something. After that day PT Master was not seen in the school and died soon thereafter. The boy who had stolen his wallet was seen playing flute on his grave. It is a story of shadows of loom.

The section on travelogues contains an essay of Spain’s Garcia Lorca by Salma Awan. According to available information, Federico García Lorca is one of the most important Spanish poets and dramatists of the twentieth century. He was born June 5, 1898, in Fuente Vaqueros, a small town a few miles from Granada. In 1922, Lorca and the composer Manuel de Falla organized the first cante jondo, or “deep song,” festival in Granada. During this period, Lorca also became part of a group of artists known as Generación del 27who exposed the young poet to surrealism. In 1928, his poetry collection Romancero Gitano brought Lorca far-reaching fame; it was reprinted seven times during his lifetime.In 1929 and 1930, Lorca traveled to New York City and Cuba. He returned to Spain in 1930 and, beginning in 1931, toured the country with the theater group La Barraca. He was arrested in Granada on August 16, 1936, near the beginning of the Spanish Civil War. He is believed to have been murdered by Fascist forces on August 18 or 19, 1936. Salma Awan visited Garcia’s museum. She adds that Garcia wanted one to keep one’s soul intact. She quotes Urdu translations of some of his poems (Page 214).

Poems form a large portion of ‘Lowh’ from page 233 to326. Satyapal Anand’s poem ‘Manind Aur Bemanind’ (like or unlike) is an interesting comparison between Akleedas (geometries) and Algebra. He wonders as to how both can be termed in either terminology. He quotes Mir and Ghalib in poetry with the same dilemma. Ali Muhammad Farshi uses the computer technology vocabulary in his poem ‘Mamnua Sanduqcha’ (forbidden box); words like inbox and Facebook (Page 260).

What follows is a large section on ghazals, first part of autobiography of Dr Rasheed Amjad, translations from foreign languages and this reviewer’s submission on a cultured voice Naheed Niazi, humour and kafis by Sarmad Sehbai. So much of literature has been presented in this issue of Lowh – a treat for literature lovers.