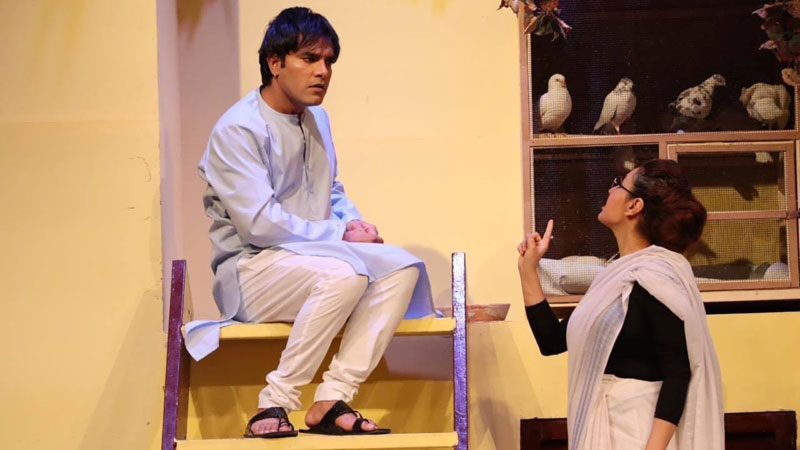 In the 1984 version of Nach Na Jane Aangan Terha, the role of Akbar was played by Saleem Nasir. If anyone outdid that role it was none other than Hasan Raza who received a great deal of applause and appreciation from the crowd.

Despite heavy downpour the play saw a huge audience.

The entire cast and crew made an enormous effort to do justice to the script of the guru of satire-Anwar Maqsood. A great tribute to the ‘living legend’ in the field of Urdu literature.

The play counts the different political eras in the history of Pakistan. The era before Ayub Khan was an era of simplicity. The three figures of Mehboob Ahmed (husband), Jehanara (wife) & Akbar(helper) are not rich but yet they are happy. The husband and wife do not have a child and Akbaris like a child to them. In between little nit-picks and witty verbal attacks the play focuses on the unconditional love between the family members, especially Akbar who considers himself more of family than a servant and vice versa.

As the play moves into the era of Z.A.Bhutto it talks of dance and music and success. Sufi (Mohsin Ijaz) is the new director and he is seen exploiting young girls in the name of business in the industry. He, a member of the PPP has been in Jail thrice.

Bhutto’s era was an era of freedom of speech and body. Whilst it was liberating in both the intellectual ad moral sense unlike Zia’s regime where what appeared to the eye was not the truth. Whereas there was not as much hypocrisy as in the so-called Islamic Era of Zia Ul Haqq, it would not be fair to say that ZAB’s era was devoid of all evil.

Even though Zia claimed Pakistan to be an Islamic Republic, the banking system still functioned on interest or what you call sood.

It was an era of conservatismand lies. What was on the face was not inside.

Th common saying “Appearances can be deceiving” is perhaps applicable to all political leaders. As Pervaiz Musharraf sets in the military coup made the army strong and the civil sector weak. Then comes Imran Khan. Another pack of lies.

The play ends on Akbar’s death. As the audience spills into tears at the death of this funny and considerate person, it once again takes a twist

Akbar comes out of nowhere and surprises the audience who laughs with relief at seeing him alive.

The primary theme of the play is the transition from one era to another and the changes it brings about as the world evolves.

As the duo realize Akbar’s importance in their life and the other way around so is paved a path for love and generosity.

Mehboob Ahmad &Jehanara want to rent out a room and it here is where the journalist or sahafi (Tanvir Gill)makes his entry!

He is struggling to make both ends meet and as he reaches a deal with Mehboob Ahmad and Akbar he finds a room in Rs 1000 per day. As the journalist enters the family he wishes he never had done so! Why? Take a wild guess! 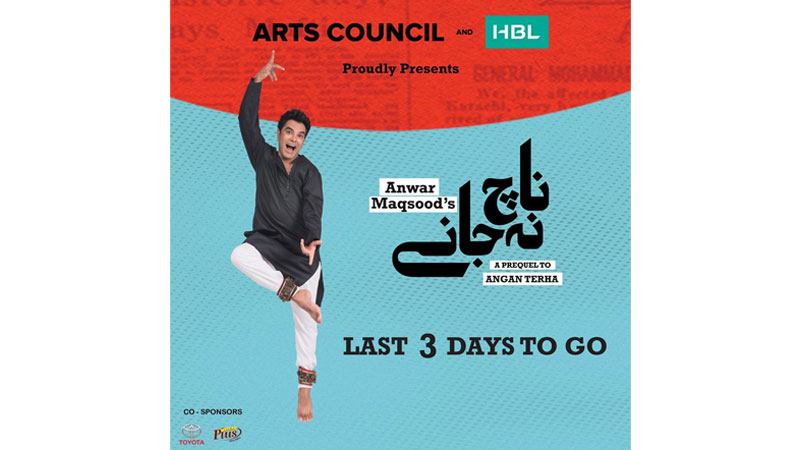 Some of the very catchy dialogues on part of Akbar who is not educated but has a natural flair for dance and actingare as follows:

(Who will remember you Akbar. Here nobody remembers anyone).

(Who is addicted to drugs? The entire of Pakistan)

The two very grave issues are dealt with here. One the selfish attitude of people and second the excessive use of not only drugs but all kinds of addictions.

As Akbar becomes part of the film fraternity, he watches the exploitation of young girls by the director intently. He acts as a bodyguard to keep the girls safe and away from the monstrous SUFI.

Observing this a girl falls for Akbar and as she claims about the ring he put on her finger near the river a very witty dialogue is spoken:

“The ring I put on your finger was tight on me”

The use of jocularity (humour) catches the audience off-guard as the serious situation turns into a comical one. This is an example of comic relief. Another example of comic relief is when Akbar’s mother dies. As he hides behind the façade of a cheerful and careless boy he is broken in his heart and as he looks back in retrospect the dialogue spoken by Mehboob Ahmed comes to his mind! A great play! If you missed it, you missed a real treat! A great experience for all literature lovers!