The Umarkot Fort is in government’s consideration to be preserved

* As far as the department’s strategy for restoration is concerned, the conservation of ancient civilisations and culture is the priority of the Antiquities & Archaeology Department 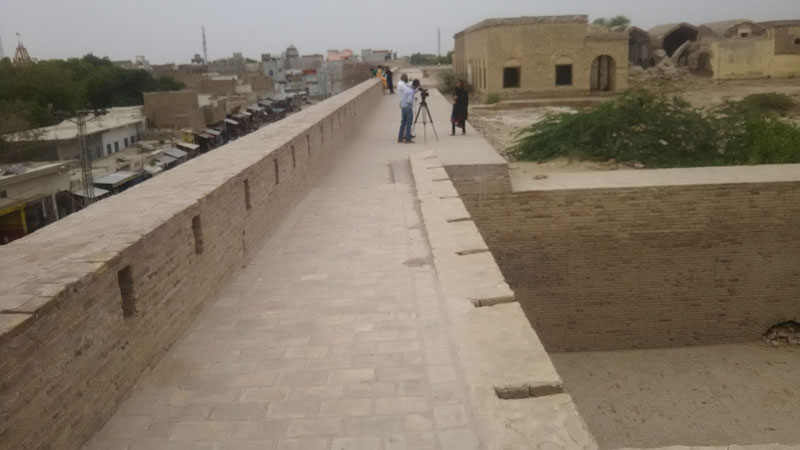 Pakistan is blessed with numerous natural, geographical and historical sites. Sindh only has a 5,000-year-old history with one of three precious forts, namely Umarkot Fort that is internationally recognised with plethora of tourists coming to see it every year.

As far as the department’s strategy for restoration is concerned, the conservation of ancient civilisations and culture is the priority of the Antiquities & Archaeology Department to secure the heritage of Sindh and it is also considering to secure literature, arts, calligraphies and paintings of the fort so as to keep the history of Sindh alive.

As far as its history is concerned, there are different versions about the historical background of Umarkot Fort, which was once used for residential or military purposes by the rulers of the province.

Some people believe that Umerkot is named after ruler Umer Soomro, who gained fame because of romance with Marvi of Tharparkar.

However, other historians and heritage experts say the fort was the property of the Sodha Rajputs, the rulers of the area.

According to Achar Khaskhali, a researcher & Journalist the history of Umerkot predates the advent of Islam in the region. “It was actually the property of the Rajputs of Rajasthan until they gifted it to the Kalhoras of Sindh to develop better relations and bring peace between Sindh and Rajasthan,” he said, adding that not only the Kalhoras but the Talpurs also started development work to preserve this landmark.

During visit it was learnt that the new museum building consists of three main galleries and two lobbies. The objects of special interest of the museum are; large number of coins of Mughal period, some of the old guns, pistols, swords, armors arrows, bows, helmets and such other material of war, manuscripts, paintings, royal documents, specimens of calligraphy are in display in the galleries and lobbies. Photographic enlargements depicting the life of Tharparkar are mounted on the walls of the Museum.

As far as its history is concerned, there are different versions about the historical background of Umarkot Fort, which was once used for residential or military purposes by the rulers
of the province

The visitors are happy, to see the work which is being done as the entry fee for foreigners is 300 purees, and whereas for national 10-20 rupees concerning their ages.

Moreover, the DG Antiquities & Archaeology Department is much concerned over preservation of the Sindh heritage, and seems doing his best to get the fort as it was since the fort has the histories of many Mughal emperors such as Hamayyun, Jalaluddin Muhammad Akbar, Umer Sumoro, Mian Noor Muhammad and Bamar son of the Dhari Barah etc.

Not only Umerkot but other fort of Sindh is also in the attention of the department.

Achar Khaskhali said that the Antiquities & Archaeology Department is taking such serious action for restoration and conservation to save this heritage, “People who visit must be given awareness, we are standing in need of being cautious to save our historical assets”, he added.

Resident of the Umerkot stated that now steps are being taken to save this such precious asset of Sindh adding that there is supposed to be more attention to secure the historical aspects of the fort. On the other hand, there is an archaeological museum facilitates the victors to know the ancients’ history of subcontinent since the scriptures and art are preserved in it.

Nadeem Qaimkhani a resident gladly said the newly step for the fort is appreciative, adding that there must be proper attention over the heritage all the year round. If the government makes the Umerkot attractive in its original condition, it will grab the attention of the several visitors.

Curator of Umarkot Ghulam Hussain Burdi while talking to Daily Times said Umer Kot walls are being restored, old museum is being renovated and feasible public toilets. Moreover, as a curator I am available to guide and give awareness to visitors.

DG Manzoor Ahmed Kansro, it is our pleasure to have one more museum in Umarkot, which is under construction where we will display the historical Umer Kot fort’s thousands year detailed history. In coming days, we have planned to construct guest house for visitors and canteen as well.

He insisted that it is also the duty of the people to save and take care of heritage.