Resuscitating the Kashmir cause

Kashmir is once again in the limelight, making headlines in national and international media. Though it has been in news, time and again, since the very partition of the subcontinent, this time the situation is different for three reasons: Narendra Modi’s undoing of the autonomous status of the valley, unprecedented sensitisation and internationalisation of the repressive and fascist face of the Indian regime, and a vibrant and realistic diplomatic maneuverability by the government of Pakistan that is serious about the Kashmir cause and its Kashmiri brethren. The ongoing horrific developments in the valley are really alarming for national, regional and international peace and stability.

The scrapping of the special status of Kashmir brought the decades’ long contention to a flashpoint. The abrogation of Article370 of the Indian constitution that promised Jammu and Kashmir a historical autonomous status didn’t come in vacuum. A number of internal and external geopolitical and geostrategic shifts contributed to that end. And so are its effects to emerge in the foreseeable future. The present internal political make-up of India is a major driver in this regard.

The extremist, BJP-led government that made it to the corridor of power on an anti-Pakistan rhetoric and war-mongering electioneering is repugnant in its approach and policy directed towards Pakistan and what it stands for. This move of New Delhi is a desperate bid to ‘punish’ Pakistan for the global embarrassment India had to face on February27, 2019 in the ‘unexpected response’ against its aggression and misadventure. By undoing the special status of Jammu and Kashmir, going against the disputed nature of the valley, Modi has tried to deprive Pakistan of its pragmatic stance of supporting the Kashmir cause, and to resolve it in accordance with the aspirations of Kashmiris and in the light of the resolutions of the United Nations Security Council. 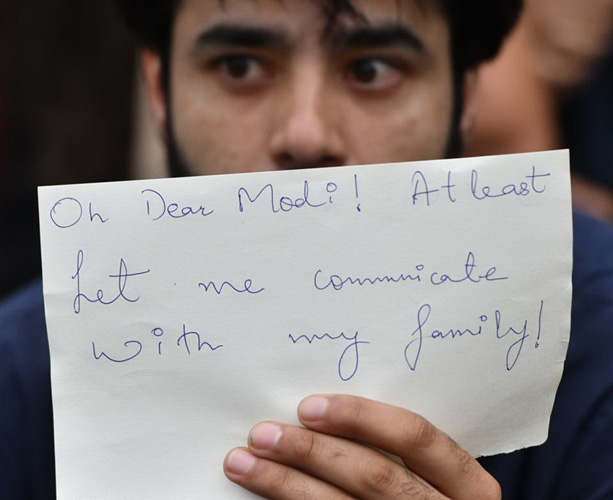 Regional and international political and security landscape encouraged India to expedite this move. Some political pundits believe it is because of the Pakistan-US rapprochement, especially in the wake of Imran Khan’s maiden visit to America as Pakistan’s premier. Notable in that visit was President Donald Trump’s offer for mediation of the Kashmir issue-a request claimed to have been made by Modi that India denied. Given the disputed status of Jammu and Kashmir, as enshrined in the UNSC resolutions, and under the canons of international law, the Indian government could have assumed that Trump’s offer of mediation if accepted would bring an end to their long-cherished repressive and utopian designs of making Kashmir a part of India, once and for all.

All mediations and canons of law would likely demand a resolution based on the UNSC resolutions and the right to self-determination, which, in turn, would end in the apparent defeat of the hegemonic aspirations of India. Hence, the Indian government hurried to fully merge Kashmir in India so that an offer of mediation in future may be deemed as ‘interference’ in the internal matters of India.

Closely related to this move isIndia’s apparent and hawkish intention of transforming the demographic makeup of Kashmir by legalising and encouraging settlement of Indians from other states in the valley. Hawks in the Indian administration know that a region cannot be held by force for too long, and an international intervention for a plebiscite is inevitable, sooner or later. Therefore, for them, a demographic transition ending in Hindu majoritarianism in the valley would serve India’s ambitions whenever a plebiscite takes place. In fact, by scrapping Article 370, India has deprived itself of its only legal claim on the valley. Now India is nothing but an occupying force hijacking the valley merely on brute force.

As India has clearly rejected any bilateral negotiation and a third-party mediation, holding down the valley by repressive moves seems to be its last fascist resort. Allowing extremist Hindus to own properties in the valley is India’s last and desperate bid for mass demographic transformation and composition-a move that may serve its interests whenever it is compelled to have a referendum in the valley. The move is likely to result in the genocide of Kashmiris, a fear already voiced by Syed Ali Gillani. The situation is very critical. Kashmir, the ‘paradise on Earth’, depicts the picture of a living hell these days.

Modi is widely believed to have ditched Nehru’s India who had said in the Lok Sabha on June 26, 1952: “Do not think you are dealing with a part of Uttar Pradesh, Bihar or Gujarat. You are dealing with an area, historically and geographically and in all manner of things, with a certain background. If we bring our local ideas and local prejudices everywhere, we will never consolidate. We have to be men of vision and there has to be a broadminded acceptance of facts in order to integrate really. And real integration comes of the mind and the heart and not of some clause which you may impose on other people.”

Internationalisation of the atrocities wreaked by Modi has roused the world’s conscience in favour of the helpless Kashmiris. The illegality of the Indian occupation has been acknowledged worldwide. UN General Secretary and the United Nations Security Council have voiced unequivocal support for Kashmiris’ right to self-determination. India’s opposition parties, news personalities and even former generals have censured Modi’s move of depriving the valley of its erstwhile autonomous status. A number of world organisations and human rights bodies stand with Kashmir as never before. The OIC has asked the Indian administration to restore Article 370. All these internal and external pressures would be serious blows to India’s repressive designs and aspirations.

The Kashmir cause has recently become central to Pakistan’s diplomatic endeavours and foreign policy. Unlike the preceding governmental setups, this time, the Pakistani leadership stands firm for Kashmir and its people. They are quite unlikely to succumb to any pressure or coercion, or stand as a mere spectator to India’s aggression. It is widely believed that the Indian stance vis-à-vis Kashmir would backfire sooner than later. The move would probably lead to more indigenous resistant movements in Kashmir. Pakistan taking the issue to the International Court of Justice is a positive move, bound to expose India’s illegitimate occupation. If India resorts to full-scale use of brute force, Pakistan stands ready to counter or neutralise it, thanks to its credible nuclear deterrence capabilities and battle-hardened armed forces.

The valley is ablaze this time as never before. Curfew and other repressive and military means have made it a living hell. Such repressive measures can’t silence the thunder of the freedom aspirations roaring in the hearts and minds of people. Modi in his arrogance can go to any length to actualise India’s extremist designs. Pakistan is the frontline state to stand with Kashmiris and their just cause. Apart from extending diplomatic and moral support to its Kashmiri brethren, Pakistan should be wary of India’s plans to divert world attention from the real issue and accuse Pakistan of terrorism. A hawkish India may resort to a Pulwama type misadventure within the valley only to malign Pakistan and to distract international attention from the core issue. Such a nefarious act could also be carried out to justify the revoking of Article 370, and the subsequent brutalities in Kashmir.

Although a decisive event favouring and freeing Kashmir from the fascist clutches of India may take a long time, it is but a certainty. The only weapon India currently holds the valley with is force. The use of brute force for a prolonged period would likely turn Kashmir into another Afghan-like imbroglio: demoralise Indian forces, affect polity and downgrade the economic status, resulting in an ultimate defeat to India’s ambitions. The determined Kashmiris are eventually bound to turn the imperial dreams of India into a decisive end of India’s aspirations.