Rabies in Sindh amid a shortage of ARV

As the number of dog-bite deaths across Sindh reaches 11, there has been an immense shortage of anti-rabies vaccine (ARV) by some 800,000 dosages, amid a growing population of stray dogs and almost non-existence of facilities in the rural parts of Sindh to face the challenge. Though health practitioners and officials believe that the entire country was running short of the ARV, the situation in Sindh is turning worse as in Karachi alone more than 150 dog-bite cases have been reported in major city hospitals on a daily basis. No action is seen on the ground for the prevention of the menace and control of the population of stray dogs in the metropolis and rural areas of the province.

An 11-year-old boy, suffering from a bad case of rabies, was brought from Thatta to a Karachi hospital and died within hours. No inoculation was given after a stray dog had bitten him in the shoulder. It is such a saddening death, and this is what happens when people are not conscious of their responsibilities. There is also a scarcity of vaccines, which makes the condition even more dismal. 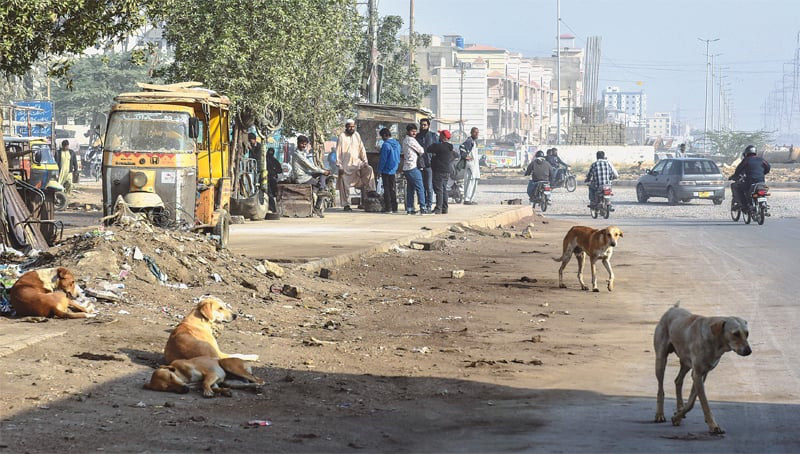 There should be more efforts for a rabies-free Sindh; 11 people have died this year in more than 69,000 dog-bite cases in Sindh. In 2019, there have been six deaths registered due to rabies in Karachi alone. A scary situation has risen; about 69,453 dog-bite cases have so far been registered in the different parts of the province in 2019. An anti-rabies vaccine is not available anywhere in Sindh; cases from the rural parts of the province are also referred to Karachi’s big hospitals. Hospitals blame a severe shortage of ARV in the country as the primary reason restricting the correct treatment of the victims. People associated with the vaccine imports highlight the main reasons for the shortage.

There is a global crisis regarding the availability of anti-rabies vaccine after the ones produced by China were not found meeting the security concerns. In the absence of the Chinese vaccine, India became the only country to fill the position. These days India is not able to meet its own demand so it has reduced its ARV export to other countries including Pakistan. The situation in Sindh demands prompt moves from government to meet the challenge. Officials agree with the worry over the scarcity of vaccines, which is a general problem being encountered by hospitals throughout Pakistan, but what concerns them most in Sindh is the rise in the population of stray dogs.

The continuously increasing population of stray dogs has resulted in an increase in the number of dog-bite victims, primarily children, even in Sindh’s urban areas. The concerned authorities should take proper measures to make Sindh rabies-free utilising a thorough policy. It is painful that children are the major victims of stray dogs, both in urban and rural Sindh.

Sindh Health Minister Azra Pechuho on Tuesday informed the provincial legislature that more than 69,000 cases of dog bite had been reported across Sindh during the year. She added that the tension with the neighbouring India had created a serious shortage of the anti-rabies vaccine. A Chinese company had also closed its operations. The minister, after a resolution was moved in the Sindh Assembly, said that a dog bite is a serious problem and rabies is highly dangerous. Such matters need our serious consideration to keep our people safe.

Rabies is an avoidable disease that is passed to humans through the bite of a diseased animal. The rabies virus penetrates the host by way of a bite contaminated with the saliva of one of its carriers. Rabies poses a menace to approximately three billion people worldwide. In Pakistan, most rabies cases are caused by dog bites. The Rabies Centre at the Karachi Civil Hospital recorded 10,288 rabies cases that were vaccinated; Jinnah Postgraduate Medical Centre had 7,697 vaccinated cases in the past year. Children and the elderly were the most common victims of dog bites.

In spite of the high number of cases, the Sindh health department and the Karachi Metropolitan Corporation have not been successful to launch a thorough campaign against stray dogs.

Open sore purifying and vaccination within a few hours after contact with a suspect rabid animal can prevent the start of rabies and death.

The prevalence of dog bites in the country is extremely high. Research has shown that most of the population is not conscious of the risk of rabies when bitten by rabid dogs, or do not find the right treatment for its prevention. WHO, in collaboration with provincial health authorities, is working to develop dog-bite treatment centres to strengthen post-exposure prophylaxis. Schedules are being developed to involve other sectors, such as livestock authorities and veterinary research centres, in rabies control.

The concerned authorities concerned should take immediate measures to make Sindh rabies-free and devise a comprehensive policy. It is so unfortunate that children are the major victims of stray dogs, both in urban and rural Sindh. If we don’t move now it can become a much larger challenge in the days to come.

There should be more efforts for a rabies-free Sindh; 11 people have died this year in more than 69,000 dog-bite cases in Sindh