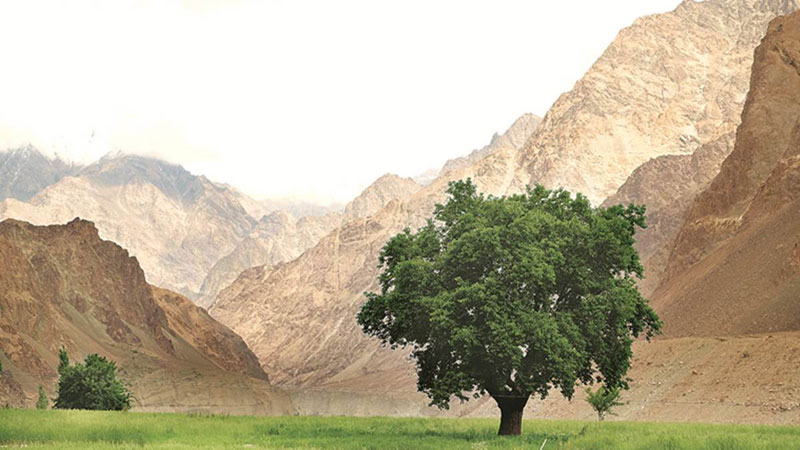 At Turtuk, one of the last villages on the border of India and Pakistan, photographer Debashish Borah came across families separated by nationalities.

“There are many family members who cannot meet one another or travel because they belong to different countries. I met a man, Goba Ali, who lives near Turtuk and visited Pakistan to meet his parents after around 40 years of separation and living across barbed wires but, practically, next to each other,” says Borah, one of the founders of an artists’ studio in Leh called Farside Collective, that works in the border areas between India and Pakistan.

Borah’s collection of photographs on Turtuk, titled “The Land with Pakistani Trees”, will be on display at a photo book exhibition, “Swim Across”, at TIFA Working Studios in Pune on August 24 and 25. The other artists showing their works are Helene Thebault, Carine Figueras, Vyas Kalathil and V Girish, who were at a residency in Leh organised by Farside Collective in July.

“River was the theme of the residency. We have always been interested in how rivers cross people’s lives, not only challenging physical borders but also mental ones. The Indus flows from India to Pakistan and, while human movement was controlled, a river called Shayok, near the Nubra valley, defies barbed wire fences to connect neighbouring villages. In Leh, we have also noticed huge mental borders between the local inhabitants and migrant populations from UP, Punjab, Rajasthan and Haryana who work there. We expanded the theme of swimming across physical and mental rivers in our work,” says Borah.

‘River was the theme of the residency. We have always been interested in how rivers cross people’s lives, not only challenging physical borders but also mental ones. The Indus flows from India to Pakistan and, while human movement was controlled, a river called Shayok, near the Nubra Valley, defies barbed wire fences to connect neighbouring villages

Kalathil’s photographs in the book, New Tigers, are of Nowsher, an old marketplace in a back alley of Leh. “Nowsher, literally translates to ‘new tiger’. The ever-expanding market of Leh is slowly eating up this place, an abode of the migrant underbelly of this new sparkling city,” reads the artist’s note. Kalathil, who is from Kerala, turned his lens on the barbers and tailors of Nowsher who are likely to be driven away as swanky cafes and showrooms emerge to cater to Leh’s increasing population.

Thebault, on the other hand, documents the street style of local youngsters of Leh who dress like the youth of South Korea and Japan. “As tourists flow into Ladakh during summers – in search of adventure, high peaks, eternal snows and ancient myths – equipped for trekking from head to toe, they cross paths in Leh’s main bazaar with the local youth, who are no less equipped, though with an entirely different attire. Adopting fashion codes borrowed from Korea and Japan mainly, the Ladakhi youth come out in a highly urban collection of sweat pants, hoodies, sneakers, caps and fancy sunglasses,” says Thebault. Her book, of these photographs, Costumes d’époque, challenges the “aesthetic codes of the expected Ladakh postcard with reality”.

The works of Figueras, from France, delve into an uncanny relationship between the human body and the Himalayas that the artist explored for her book, I Dream of Walking on the Mountain. She engaged with the wind, water and earth, collected sand, soil and stones and photographed these closely. Then, she brought her camera towards her own body as she compared the colours, textures and patterns of her skin.

Jaipur-based Girish was reportedly surprised by the number of wires and cables that criss-crossed the landscape of Leh. A photographer’s first instinct is to hide such wires as noise and focus on the scenic beauty. Girish, however, photographed the town without avoiding the wires and, thus, presents an aesthetic and visually transparent documentation in his frames.

When the exhibition veers from Leh, it takes viewers to Begusarai in Bihar, earlier this year, where Kanhaiya Kumar fought his maiden election. Titled Informed Choices, the book by Borah captures the trajectory of young hope, fierce battle and loss in the political arena. “During canvassing, the energies were very high and people thought he would win,” says Borah, whose other photo book on display is called, No Home Know Home. “It starts with the ideas of home and house. How are they similar or different is a very personal and long discussion. How much time do we need to remember the switch for a fan or a light in a new home? This is the story of different ‘objects’ I have lived my life with,” he says.