All options are on the table: Pakistan 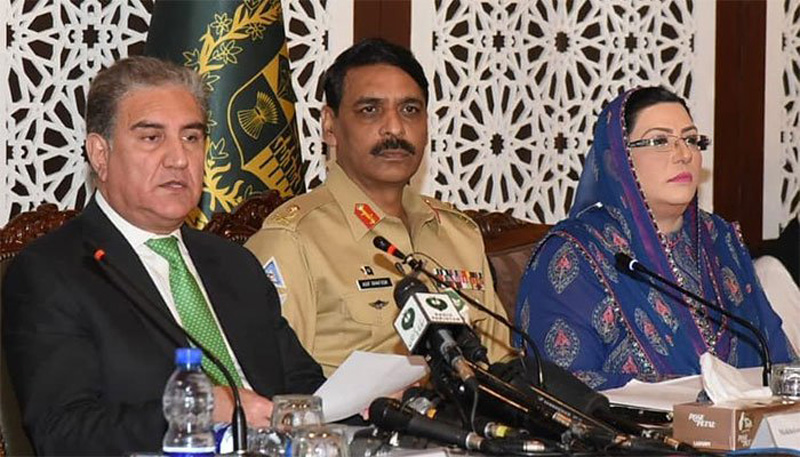 Addressing a press conference along with Inter-Services Public Relations (ISPR) Director General Major General Asif Ghafoor, Advisor to PM on Information and Broadcasting Firdous Ashiq Awan and Chairman Kashmir Committee Syed Fakhar Imam, the foreign minister said the highest forum of the world has reaffirmed its commitment to its 11 resolutions over the Kashmir issue. He said the UNSC held deliberations with complete consensus despite botched attempts by India to interrupt its session. With the meeting, the UNSC has clearly rejected the Indian point of view and endorsed Pakistan’s stance as indicated in August 13 letter, he added.

Terming the UNSC meeting on Kashmir as a big diplomatic victory for Pakistan and clear defeat of Indian designs, Qureshi said today’s India does not belong to Nehru but to Modi and that there is a clear difference between the two. He cautioned that the situation is still evolving and Pakistan will take all steps to remind the world body about the irresponsible, illegal and unilateral steps taken by the Modi-led Indian government in Kashmir.

He said Kashmiri and Pakistani leadership has already completely rejected Indian stance and now even voices inside India are being raised by the civil society and academia against the steps taken by the Indian government in the occupied valley. About 200 famous people from civil society and human rights activists have signed a petition demanding the Indian government to undo the coercive steps in IHK, he said, adding that Indian Supreme Court has also been approached in this regard.

The foreign minister said in the meeting of the Special Kashmir Committee, representation was given to the opposition parties who participated and gave their valuable input. He maintained that a message of uniformity and harmony has been given by the Pakistani nation, politicians, parliament and Azad Jammu and Kashmir leadership. A message of unity has been sent across the globe over the Kashmir issue, he added.

Qureshi said they have decided to further enhance lobbying efforts to effectively highlight the prevailing situation in the occupied valley. “It has been decided to establish a Kashmir Cell in the Foreign Office besides similar desks at Pakistani embassies in the key capitals across the world to give impetus to the ongoing efforts,” he said.

Continued from Page A1

The foreign minister cautioned the international community that India can carry out a false flag operation near the Line of Control (LoC) to divert world attention from its unilateral and illegal actions and serious human rights violations in IHK. He further said that Pakistan is fully ready to counter the evil designs of India with its highly professional armed forces, spirited nation and all the national institutions.

He said the efforts for the Kashmir cause are ‘a long drawn battle’ and Pakistan will consider all options with regard to the evolving situation. “A plan of action will be prepared for diplomatic, political and legal strategies. It is a big fight in which India was taken aback,” he said, while referring to the UNSC deliberations.

To a query, the minister said the whole international media has been supporting the Kashmiris after a long time. “Modi’s rule has buried Nehru’s India. India’s strategy is now revolving around a doctrine with three main characters: Modi, Ameet Shah and Doval,” he said. “On Friday, the people in occupied valley came out on roads to offer prayers … women and children rejected the coercive Indian measures and defied the curfew. This is a reflection of the sentiments which can unleash once the clampdown is relaxed,” he added.

ISPR DG Major General Asif Ghafoor strongly rejected the Indian propaganda of cross-LoC infiltration or attempts in this regard and termed it completely false. “Pakistan’s armed forces with complete backing of the nation are fully ready to respond to any aggression or misadventure by the Indian forces,” he said, adding that the armed forces are alert on the LoC and in case of any misadventure or aggression, they will go to the last extent to defend the motherland with full support of the nation.

Major General Ghafoor said Pakistan is a responsible country. “The Indian aggression and designs are a threat to Pakistan’s borders and the LoC but our armed forces are always ready to face all such challenges,” he said, adding that the nation has full confidence in the armed forces and their professional capabilities. He said under such a grave situation, Pakistan cannot afford any event which undermines its efforts over the Kashmir cause.

Separately, Foreign Minister Shah Mahmood Qureshi discussed the current situation in the occupied valley with his Netherlands counterpart Stef Blok in a telephonic conversation and highlighted India’s illegal and unilateral actions to alter the disputed status of Kashmir. He apprised the Dutch foreign minister of the deteriorating human rights and humanitarian situation in the occupied valley, which has been under total lockdown and curfew since August 5.

Foreign Minister Blok stated that they were closely following the developments in Kashmir and emphasised upon the need to avoid further escalation of tensions. He urged India and Pakistan to engage in dialogue to address and resolve outstanding issues.

Qureshi also called Foreign Minister of Canada Chrystia Freeland and apprised her of the sufferings of the people of the occupied valley. He also briefed her about the unilateral and illegal actions of India, including suspension of mobile and internet services, imposition of curfew, human rights violations and blockade of the entire region.

The Canadian foreign minister said that his country is following the situation closely.